A slow-moving meteor was observed and recorded falling over the Mediterranean Sea on Saturday, December 23, 2017. The event lasted about 14 seconds before the object disintegrated in a bright flash.

"This beautiful meteor, which resembles a Christmas star, was spotted over Spain at 21:07 UTC on December 23, 2017," said José María Madiedo, the principal investigator of the SMART Project framework.

The meteor flew over the Mediterranean Sea in front of Almería's coasts, southeastern Spain and was produced by a fragment from a comet that hit the atmosphere at about 43 000 km/h (26 700 mph). 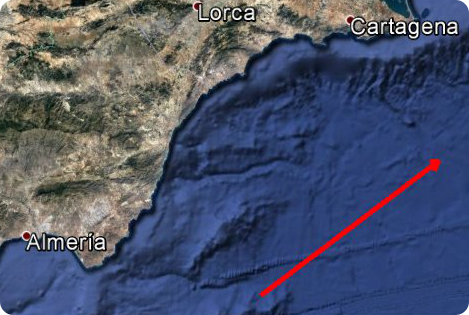 The meteor was recorded by the framework of the SMART Project (University of Huelva) from the astronomical observatories of Calar Alto (Almería), Sierra Nevada (Granada), La Sagra (Granada), La Hita (Toledo) and Sevilla.