Seismic waves generated by tornadoes when they touch down could be used to measure a twister’s intensity, according to a new study. The new research examined a catastrophic tornado that struck Joplin, Missouri in May 2011 and revealed the size of seismic waves produced by the tornado on the ground correlated with its strength.

The results suggest researchers can estimate a large tornado’s strength by measuring the seismic waves it creates, a finding that could open the door to devising more accurate methods to study tornadoes from the ground, according to the authors of the new study published in Geophysical Research Letters, a journal of the American Geophysical Union.

Weather authorities currently forecast the locations of tornadoes using surface weather stations and Doppler radar. But they still rely on storm chasers and spotters to find out when a tornado touches down. There is also no way to directly measure a tornado’s wind speed, so authorities rely on damage reports to indirectly judge its intensity.

"Our results have applications for developing a more quantitative measure of a tornado’s strength," said Anne Valovcin, a graduate student in the Earth science department at the University of California in Santa Barbara and lead author of the new study. "Also, we only see the seismic signals when it touches the ground, so that could provide a new way to directly determine when a tornado has touched down."

Seismic waves are vibrations in the Earth created when the ground shakes, usually felt during earthquakes, volcanic eruptions or large explosions. Tornadoes also generate small seismic waves when they travel over the ground, but scientists know little about how these waves vary with storm strength. 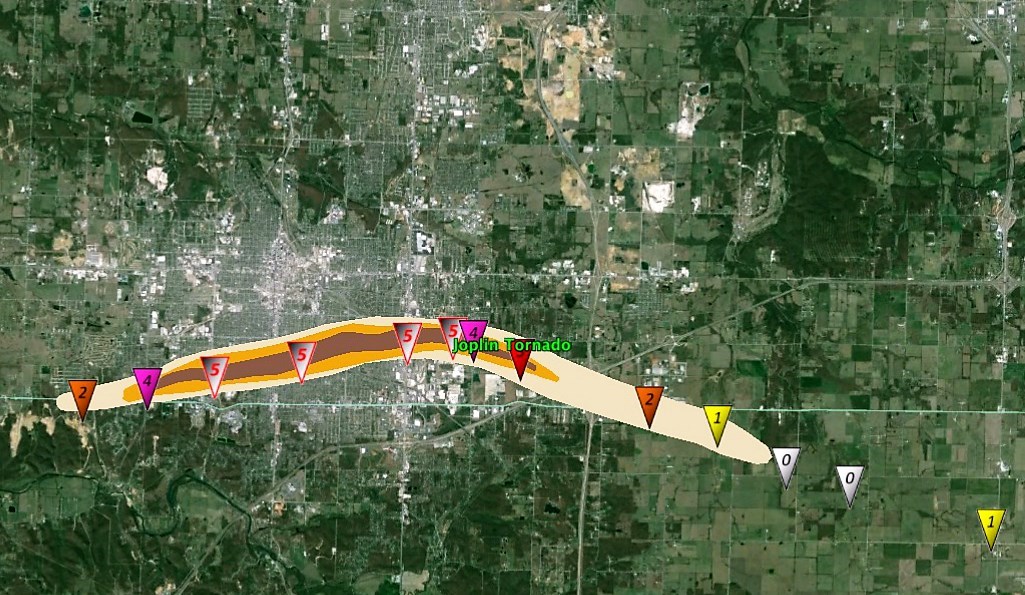 Map of the full path of the Joplin tornado on May 22, 2011. Darker colors indicate more severe damage. The numbered points give the recorded intensity of the tornado on the Enhanced Fujita Scale at that location. Photo credit: NOAA/NWS

In the new study, Valovcin and her colleagues analyzed seismic waves generated by the May 22, 2011 Joplin tornado to characterize the relationship between the size of these waves and the tornado’s strength. The Joplin twister clocked in as a powerful EF5 on the Enhanced Fujita Scale, a scale that rates the intensity of tornadoes by how much damage they cause. It killed 158 people and resulted in $2.8 billion in damage, making it the costliest single tornado in U.S. history.

The study’s authors hypothesized that if the tornado touched the ground close enough to a seismic station, the instruments could pick up those signals. "We wanted to see if we could detect these ground signals, then work backwards and create a model for the seismic waves generated by the tornado along its entire path," Valovcin said.

The researchers collected data from a network of stations built to detect small earthquakes and map Earth’s interior under North America. These stations are equipped with seismometers and barometers that measure seismic signals and changes in air pressure. The measurements for the new study came from one station close enough to the Joplin tornado to detect its seismic signals.

The results show the size of the seismic waves correlated well with the tornado’s EF rating. EF ratings range from EF0 to EF5, with EF5 being the most destructive category. The Joplin tornado went from an EF1-2 to an EF4-5 in fewer than 10 minutes and stayed at that intensity for approximately 15 minutes before beginning to lose its strength. As the twister got stronger and then weaker, the size of the seismic waves it generated increased and decreased accordingly. 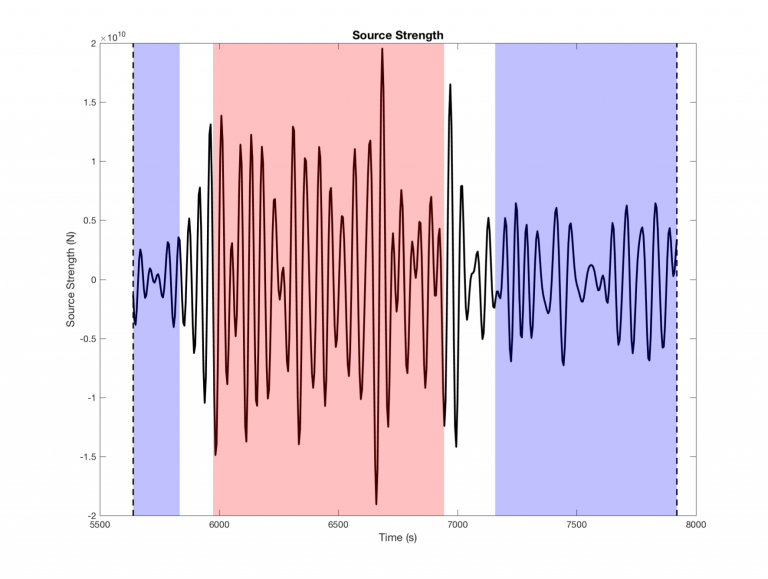 Measuring a tornado’s seismic signals could provide a better way for researchers to measure a tornado’s strength and could help determine exactly when a twister touches down, according to the study’s authors. But they cautioned the new method is largely preliminary and has several limitations.

For example, the technique requires measuring the air pressure at the time of the tornado to eliminate seismic interference from the turbulent air surrounding the twister. Seismic stations, therefore, need to be located next to functioning barometers to provide usable data.

Additionally, seismic waves generated by tornadoes are very small, and can’t be felt by a person without equipment. They don’t propagate far from their source, unlike seismic waves generated by earthquakes, which are often larger and can travel long distances. Detecting tornadoes in real-time with this method would require building a much denser network of seismic stations and barometers than currently exists, Valovcin said.