Southern California has the highest earthquake risk of any region in the U.S., but exactly how risky and where the greatest risks lie remains an open question.

Earthquakes occur infrequently and depend on complex geological factors deep underground, making them hard to reliably predict in advance. For that reason, forecasting earthquakes means relying on massive computer models and multifaceted simulations, which recreate the rock physics and regional geology and require big supercomputers to execute.

In June 2017, a team of researchers from the U.S. Geological Survey and the Southern California Earthquake Center (SCEC) released a major paper in Seismological Research Letters that summarized the scientific and hazard results of one of the world's biggest and most well-known earthquake simulation projects: The Uniform California Earthquake Rupture Forecast (UCERF3).

The results relied on computations performed on the original Stampede supercomputer at the Texas Advanced Computing Center, resources at the University of Southern California Center for High-Performance Computing, as well as the newly deployed Stampede2 supercomputer, to which the research team had early access. (Stampede 1 and Stampede2 are supported by grants from the National Science Foundation.)

"High-performance computing on TACC's Stampede system, and during the early user period of Stampede2, allowed us to create what is, by all measures, the most advanced earthquake forecast in the world," said Thomas H. Jordan, director of the Southern California Earthquake Center and one of the lead authors on the paper.

The new forecast is the first fault-based model to provide self-consistent rupture probabilities from the very short-term – over a period of less than an hour – to the very long term – up to more than a century. It is also the first model capable of evaluating the short-term hazards that result from multi-event sequences of complex faulting.

To derive the model, the researchers ran 250 000 rupture scenarios of the state of California, vastly more than in the previous model, which simulated 8 000 ruptures.

Among its novel findings, the researchers' simulations showed that in the week following a magnitude 7.0 earthquake, the likelihood of another magnitude 7.0 quake would be up to 300 times greater than the week beforehand. This scenario of 'cascading' ruptures was demonstrated in the 2002 magnitude 7.9 Denali, Alaska, and the 2016 magnitude 7.8 Kaikoura, New Zealand earthquakes, according to David Jacobson and Ross Stein of Temblor.

The dramatic increase in the likelihood of powerful aftershocks is due to the inclusion of a new class of models that assess short-term changes in seismic hazard based on what is known about earthquake clustering and aftershock excitations. These factors have never been used in a comprehensive, statewide model like this one. 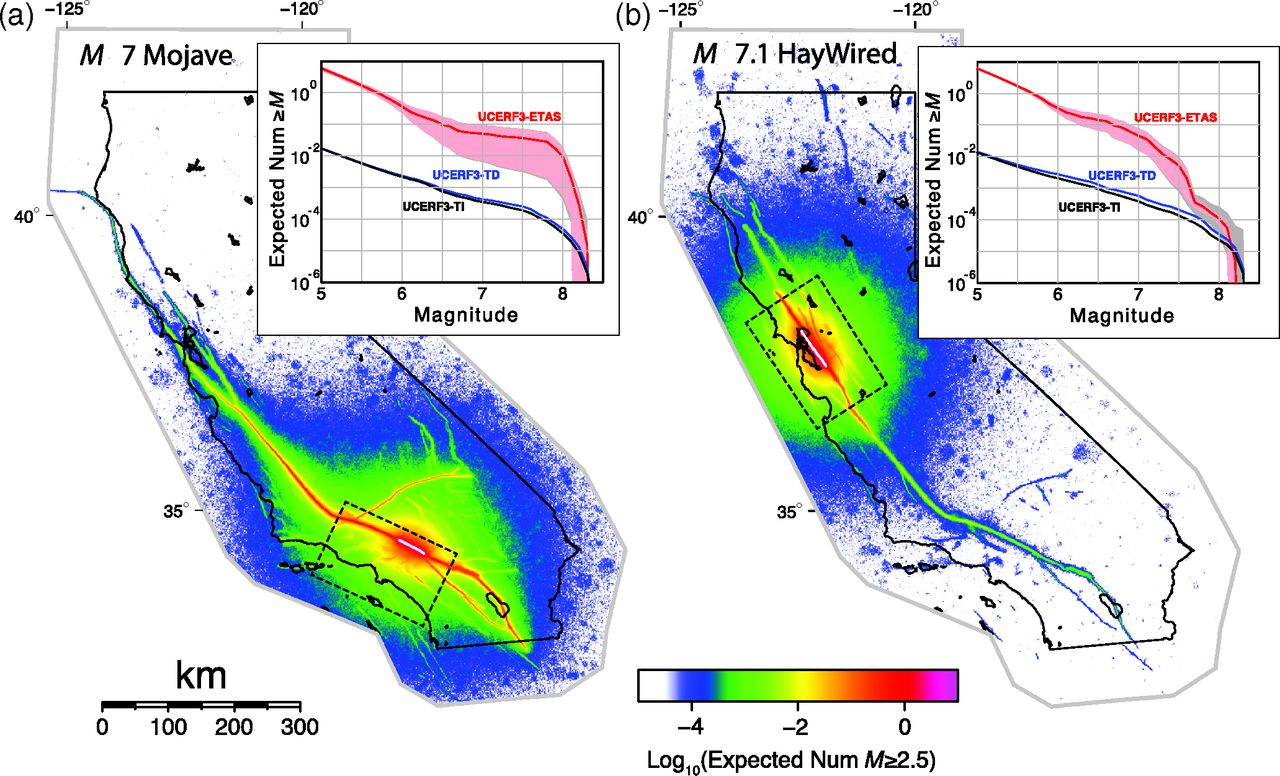 (a) Aftershock nucleation rates following a magnitude 7 earthquake on the Mojave section of the San Andreas fault based on 2×105 UCERF3‐ETAS simulations. (Inset) Magnitude Frequency Distribution for ruptures with some part inside the dashed box defining the greater Los Angeles area. (b) Same as (a), but for an M 7.1 mainshock on the Hayward fault; inset graph pertains to the dashed box defining the San Francisco Bay area. Credit: TACC

The current model also takes into account the likelihood of ruptures jumping from one fault to a nearby one, which has been observed in California's highly interconnected fault system.

Based on these and other new factors, the new model increases the likelihood of powerful aftershocks but downgrades the predicted frequency of earthquakes between magnitude 6.5 and 7.0, which did not match historical records.

Importantly, UCERF3 can be updated with observed seismicity – real-time data based on earthquakes in action – to capture the static or dynamic triggering effects that play out during a particular sequence of events. The framework is adaptable to many other continental fault systems, and the short-term component might be applicable to the forecasting of minor earthquakes and tremors that are caused by human activity.

The impact of such an improved model goes beyond the fundamental scientific improvement it represents. It has the potential to impact building codes, insurance rates, and the state's response to a powerful earthquake.

"The U.S. Geological Survey has included UCERF3 as the California component of the National Seismic Hazard Model, and the model is being evaluated for use in operational earthquake forecasting on timescales from hours to decades," said Jordan.

Estimating the cost to rebuild

In addition to forecasting the likelihood of an earthquake, models like UCERF3 help predict the associated costs of earthquakes in the region. In recent months, the researchers used UCERF3 and Stampede2 to create a prototype operational loss model, which they described in a paper posted online to Earthquake Spectra in August.

The model estimates the statewide financial losses to the region (the costs to repair buildings and other damages) caused by an earthquake and its aftershocks. The risk metric is based on a vulnerability function and the total replacement cost of asset types in a given census tract.

The model found that the expected loss per year when averaged over many years would be $4.0 billion statewide. More importantly, the model was able to quantify how expected losses change with time due to recent seismic activity. For example, the expected losses in a year following an magnitude 7.1 main shock spike to $24 billion due to potentially damaging aftershocks, a factor of six greater than during "normal" times.

Being able to quantify such fluctuations will enable financial institutions, such as earthquake insurance providers, to adjust their business decisions accordingly.

"It's all about providing tools that will help make society more resilient to damaging earthquake sequences," says Ned Field of the USGS, another lead author of the two studies.

Though there's a great deal of uncertainty in both the seismicity and the loss estimates, the model is an important step at quantifying earthquake risk and potentially devastation in the region, thereby helping decision-makers determine whether and how to respond.