Although it's still not over, Tropical Cyclone "Harvey" has now dumped more rain on the contiguous United States than any previous tropical cyclone since records began. The most rainfall produced by any tropical cyclone in the entire US was 1 320.8 mm (52 inches) in 1950. This record will most definitely be broken too, most likely by the end of the day.

The record for total rainfall from a tropical system has been BROKEN! Mary's Creek at Winding Road recorded 49.20", previous record is 48". pic.twitter.com/yCjuUOR8p3

The entire US record is 1 320.8 mm (52 inches), measured in 1950 in Hawaii during Hurricane "Hiki," over the course of 4 days. However, with more heavy rain in the forecast, Harvey will most definitely break that record, too. 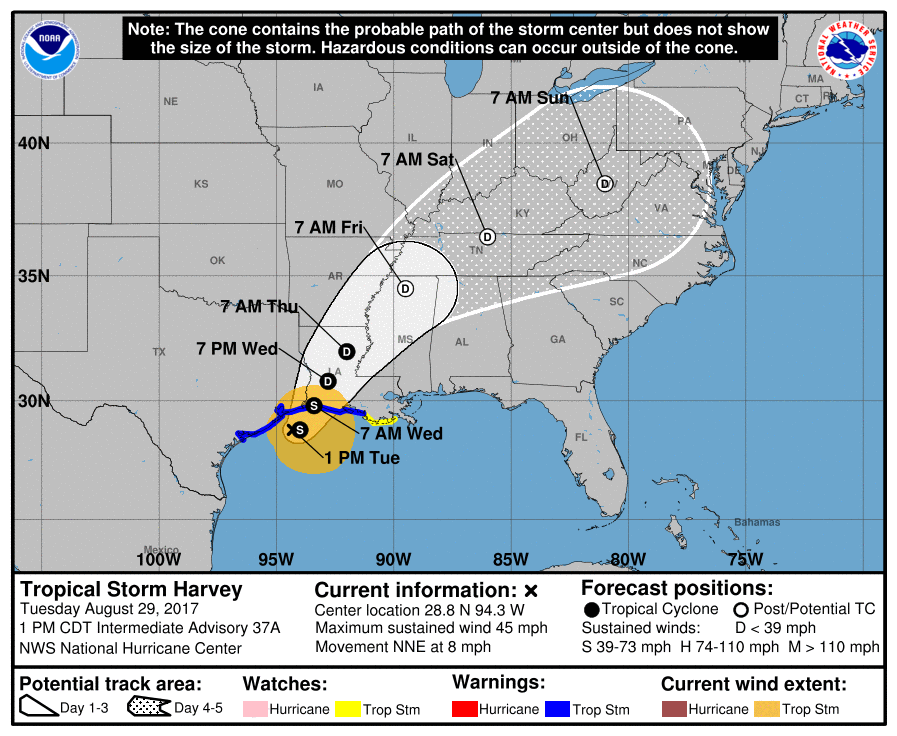 This general motion is expected to continue tonight and tomorrow and the broad circulation of Harvey is expected to move inland over the northwestern Gulf Coast within the Tropical Storm Warning area by early Wednesday (local time), August 30.

Harvey is expected to produce additional rainfall accumulations of 152.4 to 304.8 mm (6 to 12 inches) to the north and east of Houston from far east Texas into southwestern Louisiana. Isolated storm totals will reach 1 270 mm (50 inches) over the upper Texas coast, including the Houston/Galveston metropolitan area. These rains are currently producing catastrophic and life-threatening flooding over large portions of southeastern Texas and southwestern Louisiana.

The combination of a dangerous storm surge and the tide will cause normally dry areas near the coast to be flooded by rising waters moving inland from the shoreline. The water is expected to reach the following heights above ground if the peak surge occurs at the time of high tide:

The deepest water will occur along the immediate coast near the area of onshore winds. Surge-related flooding depends on the relative timing of the surge and the tidal cycle, and can vary greatly over short distances.

Swells generated by Harvey are still affecting the coasts of Texas and Louisiana. These swells are likely to cause life-threatening surf and rip current conditions.

A few tornadoes are possible today from extreme southeast Texas across parts of southern Louisiana, coastal Mississippi, and coastal Alabama.