At least 15 people have been killed, including 7 due to lightning, after intense thunderstorms accompanied by heavy pre-monsoon rains hit the Indian state of Bihar on May 9, 2017.

The storm hit Bihar, dropping temperatures, while the rest of the country still endures a sizzling heat. It destroyed standing crops, damaged houses and uprooted trees in at least 11 of 30 affected districts (out of 38 total).

"Though we are still getting reports about the damage and casualty figures from far interiors, but as of now we have reports of 15 persons killed due to nature’s fury," said an official of the Disaster Management Department. Of the casualty figures due to lightning, two persons died in Begusarai, while one person each was killed in Kaimur, Maner, Darbhanga, Samastipur and Madhubani.

Reports from far-flung areas said that trees were uprooted following thunderstorm thereby affecting power supply. In areas like Khagaria and Saharsa, several houses were damaged while in Danapur, a newly-built pontoon bridge was washed away.

Though monsoon in Bihar is slated to arrive by mid-June, rains have provided the much-needed relief from the scorching sun. But at the same time, it has poured in miseries for those living in the low-lying areas which remained water-logged after thunderstorm. Power cut, which led to a shortage of drinking water, added to their woes, the Deccan Herald reported. 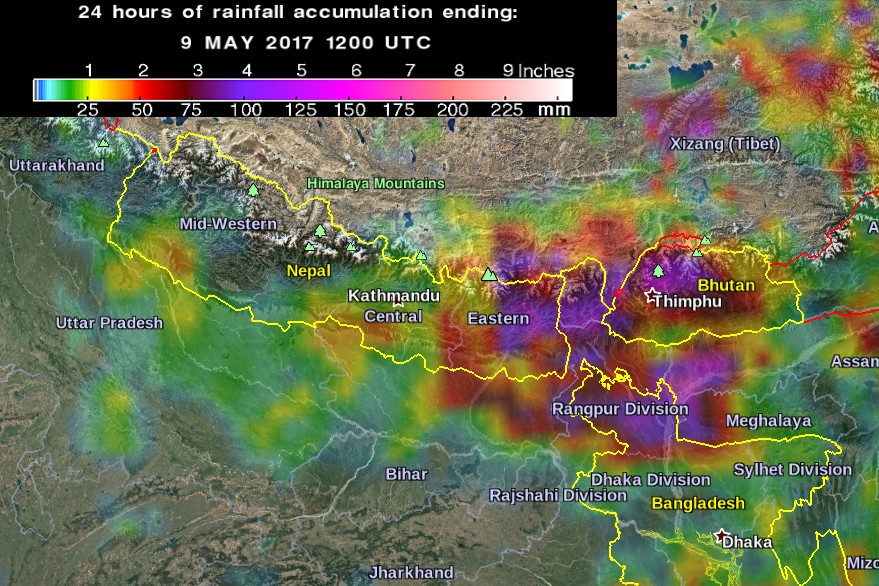 Another similar storm has been predicted for tomorrow.

Forecast model below shows 2-meter (6.5-feet) air temperature through May 25.