Tropical Cyclone 17S (Frances) formed near the coast of Northern Territory, Australia on April 27, 2017, as the 7th named storm of the 2016/17 Australian region cyclone season. Frances is moving southwest and is expected to somewhat intensify over the next 24 hours, but is not expected to make landfall. The season officially ends on April 30.

JTWC expects the system to turn toward a more westward track and intensify over the next 24 hours as favorable environmental conditions persist.

After 15:00 UTC on April 28, upper-level conditions are expected to become less favorable, with vertical wind shear increasing and divergence aloft decreasing. Frances is expected to weaken below the dissipation threshold over the next 72 hours without making a landfall.

Gales with gusts to 110 km/h (68 mph) may develop late Friday in coastal parts between Kuri Bay and Wyndham, not including Wyndham.

Tides between Kalumburu and Wyndham are likely to rise above normal high tide mark with very rough seas and flooding of low-lying coastal areas. 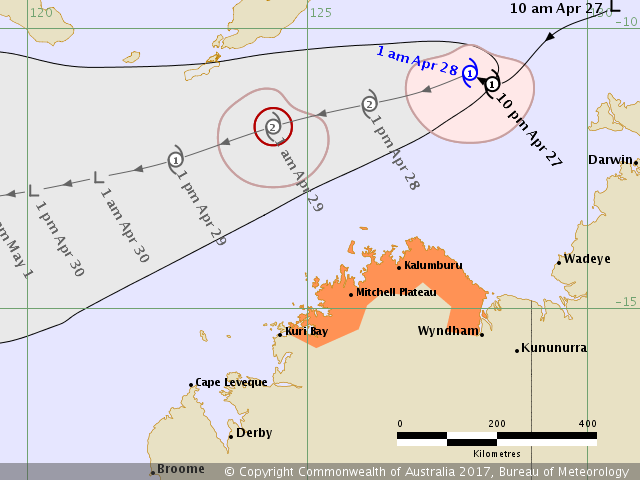 DFES-State Emergency Service advises that there are no community alerts at present. People in the Kimberley are advised to stay up to date with weather forecasts and warnings. People between Kuri Bay and Wyndham should listen for BOM's next advice.