A Nagoya University-led team reveals the mechanisms behind different earthquakes at a plate boundary on the west coast of South America, shedding light on historical seismic events and potentially aiding prediction of the future risk from these natural disasters.

When tectonic plates that have been sliding past each other get stuck, a huge amount of energy builds up, and is eventually released in the form of an earthquake. Although much is known about the mechanisms behind this process, more needs to be understood about what happens at particular plate boundaries to determine the risk of earthquakes and tsunamis at specific sites and potentially to predict when these events might occur.

In a breakthrough in this field, researchers at Nagoya University and their colleagues in South America have studied several earthquakes that occurred at the Ecuador-Colombia subduction zone over the last hundred years, revealing the relationships between different earthquakes and the size and location of the ruptures at plate boundaries that caused them. The findings were published in Geophysical Research Letters. 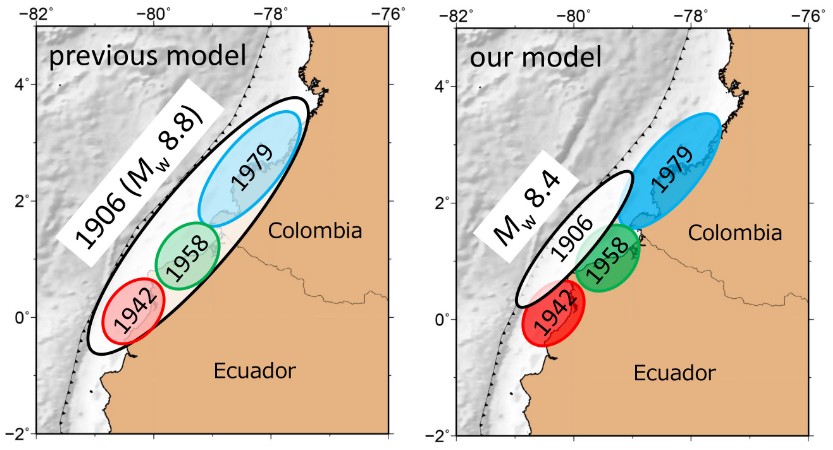 The team used a combination of data sources and models to study large earthquakes that struck the west coast of South America in 1906, 1942, 1958, 1979, and 2016. These included information on tsunami waveforms recorded at sites across the Pacific, data on seismic waves obtained by monitoring stations in Ecuador and Colombia, and previous work on the intensity of coupling, or locking together, of adjacent plates and the distance that they slipped past each other to cause each earthquake.

"The Ecuador-Colombia subduction zone, where the Nazca plate passes underneath the South American plate, is particularly interesting because of the frequency of large earthquakes there," says study author Hiroyuki Kumagai of the Graduate School of Environmental Studies, Nagoya University. "It's also a good site to investigate whether the ruptures at plate boundaries causing huge earthquakes are linked to subsequent large earthquakes years or decades later."

By carefully modeling the fault area where these earthquakes arose in combination with the other data, the team showed that the strongest of the earthquakes, that of 1906, involved a rupture at a different site than the other earthquakes. They also used data on the known speed at which the plates are moving past each other and the simulated "slip" of a plate associated with the 2016 earthquake to show that the 1942 and 2016 earthquakes were triggered by ruptures at the same site.

"Now that we can precisely link previous earthquakes to ruptures at specific sites along plate boundaries, we can gauge the risks associated with the build-up of pressure at these sites and the likely frequency of earthquakes there," lead author Masahiro Yoshimoto says. "Our data also reveal for the first time differences in rupture mechanisms between oceanic trenches and deeper coastal regions in this subduction zone."

The findings provide a foundation for risk prediction tools to assess the likelihood of earthquakes and tsunamis striking this region and their potential periodicity and intensity.

A large earthquake (Mw 7.7) occurred on 16 April 2016 within the source region of the 1906 earthquake in the Ecuador-Colombia subduction zone. The 1906 event has been interpreted as a megathrust earthquake (Mw 8.8) that ruptured the source regions of smaller earthquakes in 1942, 1958, and 1979 in this subduction. Our seismic analysis indicated that the spatial distribution of the 2016 earthquake and its aftershocks correlated with patches of high interplate coupling strength and was similar to those of the 1942 earthquake and its aftershocks, suggesting that the 2016 and 1942 earthquakes ruptured the same asperity. Our analysis of tsunami waveforms of the 1906 event indicated Mw around 8.4 and showed that large slip occurred near the trench off the source regions of the above three historical and the 2016 earthquakes, suggesting that a depth-dependent complex rupture mode exists along this subduction zone.