Scientists using the world's largest array of seismic sensors found a huge area of melting carbon covering 1.8 million km2 (684 000 mi2), 350 km (217.5 miles) beneath the Western US. The discovery challenges accepted the understanding of how much carbon the Earth contains and suggests it is much more than previously understood.

The study, conducted by geologists at Royal Holloway, University of London’s Department of Earth Sciences used a huge network of 583 seismic sensors that measure the Earth’s vibrations, to create a picture of the area’s deep sub surface. Known as the upper mantle, this section of the Earth’s interior is recognised by its high temperatures where solid carbonates melt, creating very particular seismic patterns. 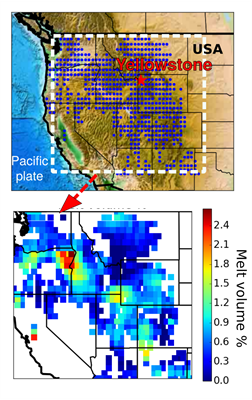 “It would be impossible for us to drill far enough down to physically ‘see’ the Earth’s mantle, so using this massive group of sensors we have to paint a picture of it using mathematical equations to interpret what is beneath us,” said Dr. Sash Hier-Majumder of Royal Holloway.

"Under the western US is a huge underground partially-molten reservoir of liquid carbonate. It is a result of one of the tectonic plates of the Pacific Ocean forced underneath the western USA, undergoing partial melting thanks to gasses like CO2 and H2O contained in the minerals dissolved in it.”

As a result of this study, scientists now understand the amount of CO2 in the Earth’s upper mantle may be up to 100 trillion metric tons. In comparison, the US Environmental Protection Agency estimates the global carbon emission in 2011 was nearly 10 billion metric tons – a tiny amount in comparison. The deep carbon reservoir discovered by Dr. Hier-Majumder will eventually make its way to the surface through volcanic eruptions, and contribute to climate change albeit very slowly.

“We might not think of the deep structure of the Earth as linked to climate change above us, but this discovery not only has implications for subterranean mapping but also for our future atmosphere,” concluded Dr. Hier-Majumder.

“For example, releasing only 1% of this CO2 into the atmosphere will be the equivalent of burning 2.3 trillion barrels of oil. The existence of such deep reservoirs show how important is the role of deep Earth in the global carbon cycle.”

We report from converted seismic waves, a pervasive seismically anomalous layer above the transition zone beneath the western US. The layer, characterized by an average shear wave speed reduction of 1.6%, spans over an area of ∼1.8×106 km2

with thicknesses varying between 25 and 70 km. The location of the layer correlates with the present location of a segment of the Farallon plate. This spatial correlation and the sharp seismic signal atop of the layer indicate that the layer is caused by compositional heterogeneity. Analysis of the seismic signature reveals that the compositional heterogeneity can be ascribed to a small volume of partial melt (0.5 ± 0.2 vol% on average). This article presents the first high resolution map of the melt present within the layer. Despite spatial variations in temperature, the calculated melt volume fraction correlates strongly with the amplitude of P–S conversion throughout the region. Comparing the values of temperature calculated from the seismic signal with available petrological constraints, we infer that melting in the layer is caused by release of volatiles from the subducted Farallon slab. This partially molten zone beneath the western US can sequester at least 1.2×1017 kg

of volatiles, and can act as a large regional reservoir of volatile species such as H or C.