According to the Australian Bureau of Meteorology, the 2016/17 Australian tropical cyclone season, expected to run from November until April, will see average to above-average number of tropical cyclones. The meteorological outlook is based on the ENSO status during the July to September 2016 period.

This year's tropical cyclone forecast is under the impact of neutral to weak La Niña conditions in the tropical Pacific Ocean, and higher than normal ocean temperatures in the northern and eastern parts of the country. The sea surface temperatures in the tropical Pacific Ocean exhibit some characteristic typical for La Niña phenomenon, although they have not reached the required La Niña thresholds.

“This year we’re experiencing warmer-than-average sea surface temperatures around northern Australia, and this will help to fuel the tropical cyclone season ahead. History shows that in an average season, about eleven cyclones form in the Australian region between November and April. On average, four of these will make landfall," said Dr. Andrew Watkins, the Climate Prediction Services Manager. 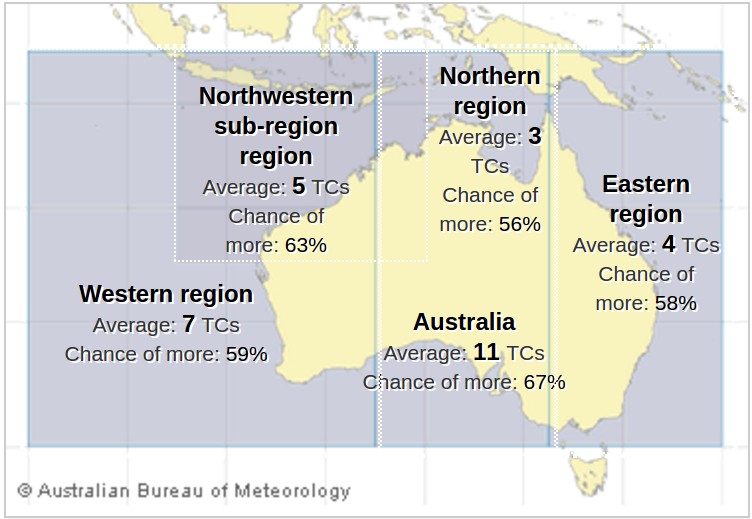 Most of the climate models predict these ocean conditions will continue into the summer season while only one model results in exceeded thresholds. The current temperatures are between 1 and 2 °C higher in the northern and eastern Australia, contributing to the development of tropical cyclones. In the period between July and September, the Southern Oscillation Index, measuring the atmospheric component of the ENSO oscillation, remained positive, exceeding La Niña thresholds during the final two weeks of September.

Chance for more tropical cyclones than usual is 63% for the Northwestern sub-region where, typically, five cyclones form or pass every season. About 40% of the tropical systems in the region affect coastal areas. The outlook accuracy for the region is moderate.

The Northern region can expect an average season, as the chances for more tropical cyclones are only 56%. During an average year the region gets three cyclones, and about 1 or two tropical lows that develop into cyclones after crossing into the Western or Eastern regions. About three-quarters of tropical cyclones impact coastal regions in the Northern area, and the outlook accuracy is very low.

According to BOM, a near average tropical season is expected in the Eastern region, as the chances for above average one are at 58%. A quarter of tropical cyclones in the region make landfall and the outlook accuracy for the area is low.

Last year had seen the lowest recorded number of tropical cyclones, as only three of them formed during the season, one of which made landfall, and Tropical Cyclone "Stan" has crossed WA's Pilbara as a Category 2 system. According to Dr. Watkins, it is highly unlikely this year will be as quiet, as well.

In terms of rainfall, the 2016 winter in Australia was the second wettest on record. Above-average rainfall has continued into spring, with September receiving almost three times the normal rainfall for the month.