Tropical wave Invest 97L, soon to become Hurricane "Matthew," was named on September 25, 2016, when it was located just southwest of the Cape Verde Islands. Matthew became the 13th named storm of the 2016 Atlantic hurricane season on September 28. By October 9, it passed over the Windward Islands, Haiti, Cuba, Bahamas and the United States, claiming lives of over 1 000 people. Matthew peaked on October 1 as a Category 5 hurricane with maximum sustained winds of 257 km/h (160 mph).

Matthew became a tropical storm at 15:00 UTC on Wednesday, September 28 with its center located only 55 km (35 miles) NE of St Vincent and the Grenadines. By 21:00 UTC, it was 110 km (65 miles) W of St Lucia producing locally heavy rain and strong winds in parts of the Lesser Antilles. It left one person dead in St Vincent on its passage into the Caribbean.

3-D Look at the Rain in Developing Tropical Storm Matthew

NOAA's GOES-East satellite imagery from Sept. 27 to Sept. 30, 2016, shows Tropical Storm Matthew move into the Caribbean Sea where it became a hurricane

Matthew strengthened into a hurricane on Thursday, September 29, and by September 30 became the 1st September Caribbean major hurricane since Felix in 2007 and the 1st Carribean in any month since Sandy in 2012.

It remained at that strength as it moved across the Caribbean Sea, dropping heavy rain. Floods it caused in Colombia resulted in deaths of two people. In Haiti, at least two fishermen died by Monday, October 3.

Matthew made landfall near Les Anglais in western Haiti at 11:00 UTC on Tuesday, October 4, 2016, as a Category 4 hurricane. At the time of the landfall, it had maximum sustained winds of 230 km/h (145 mph) and gusts to 278 km/h (172 mph). It was the strongest hurricane to make landfall over Haiti since Cleo of 1964. Both of them made landfall in the same location.

As of early October 10, the number of people it killed as it crossed the island was over 1 000.

Aerial footage of the city of Jeremie on the northwestern coast of the country and the capital city of Grand'Anse Department showed hundreds of flattened houses and deserted streets strewn with debris.

The system then hit eastern Cuba, destroying everything in its path. The famous town of Baracoa, one of the country's oldest and most historic towns, was hit especially hard with many of the houses destroyed. Initial reports from the city mentioned complete destruction.

This animation shows IMERG rainfall estimates for the period September 29 to October 5, 2016, for the northeastern Caribbean in association with the passage of Hurricane Matthew, which is indicated by the white line and corresponding storm symbols. Beginning at 00:00 UTC on the September 30, rainfall totals associated with Matthew are in excess of 254 mm (10 inches) all along its track (shown in red), reaching upwards of 635 mm (25 inches) (shown in pink) when the storm was intensifying on September 30. Over land, IMERGE shows wide areas of between 381 and 508 mm (15 to 20 inches of rain) (dark red and purple areas, respectively) all along the southern coasts of Haiti and the Dominican Republic on the island of Hispaniola. Credit: NASA/JAXA, Hal Pierce

Matthew battered the Bahamas on October 5 and 6 and passed between Andros Island and New Providence by 14:00 UTC on October 6, dangerously close to Nassau, with maximum sustained winds of 213 km/h (132 mph), Category 4.

It approached the east coast of Florida late Thursday, October 6, 2016, and weakened into a Category 3 hurricane by 06:00 on October 7. At the time, it was located about 70 km (45 miles) east of Vero Beach, Florida.

Matthew as seen from the ISS on October 6, 2016. Credit NASA/ISS 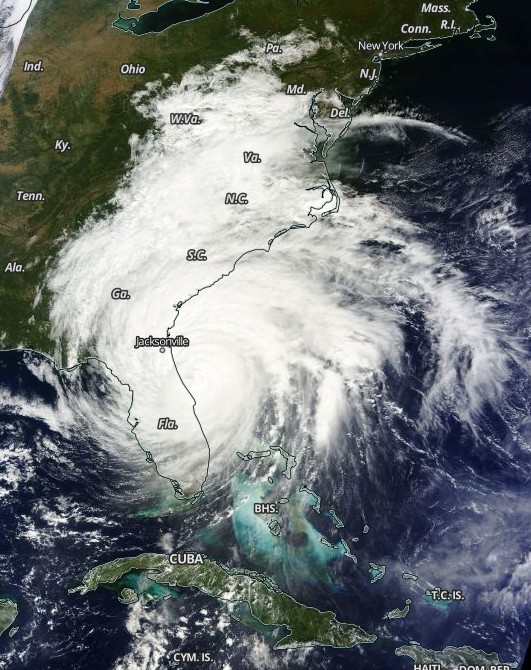 More than 2 million people were told to evacuate in the United States, with 1.5 million of evacuees from Florida alone.

A peak surge of 3 m (9.88 feet) above normal was measured at a tide gauge at Fernandina Beach, Florida on October 7. Storm surge flooding affected the St. Augustine area, including major flooding on Anastasia Island where water was reported to be 76 cm (2.5 feet) above ground level.

A new inlet was created between Marineland and Matanzas Inlet, between Palm Coast and St. Augustine Beach, Florida.

Matthew made landfall as a Category 1 hurricane near McClellanville, a village 48 km (30 miles) north of Charleston, South Carolina just before 12:00 UTC on October 8. It was the first hurricane to make landfall in the Carolinas since Arthur on July 4, 2014. At the time of landfall, Matthew had maximum sustained winds od 120 km/h (75 mph).

Hurricane #Matthew has made landfall in South Carolina – the first hurricane to make landfall in the Carolinas since Arthur on 7/4/2014. pic.twitter.com/zuP3XcycSG

It produced over 203 mm (8 inches) of rainfall in 6 hours of early October 8 over portions of east North Carolina and totaled over 355.6 mm (14 inches), causing widespread flash flooding and record river flooding. Hourly rainfall estimates were as high as 178 mm (7 inches). 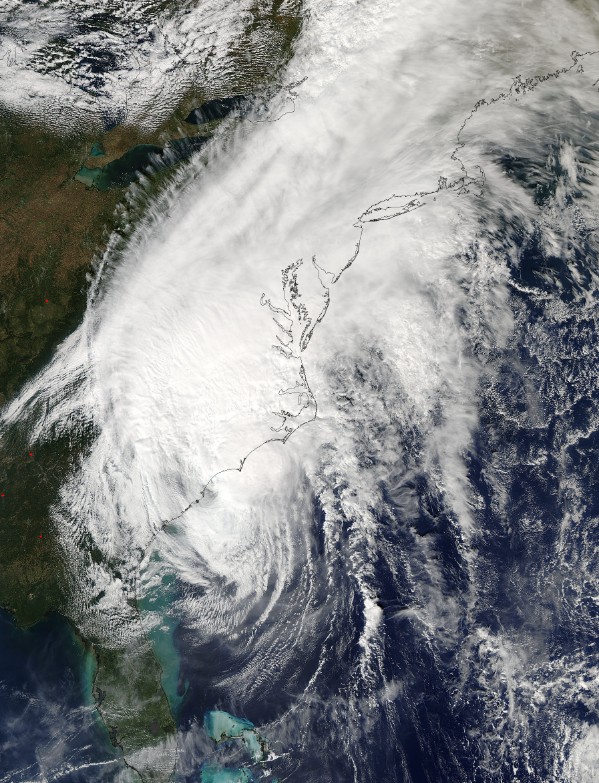 As of late October 9 into Monday, October 10, media reports mention at least 8 people dead in North Carolina and 3 in South Carolina, bringing the total death toll to 19 people across four Southeastern states.

From Johnston County, cars and trucks driving through water on I-95…be smart, people. Don't do this. #Matthew pic.twitter.com/a7Yq4jG8nl

Matthew became post-tropical on Sunday, October 9. However, it will continue posing a danger for days to come.

"Threat of flooding would persist all week as many rivers were expected to top record-breaking levels. Hundreds of buildings in the state, including at least one airport and one school, had already taken on water," North Carolina Governor Pat McCrory said.

At 21:00 UTC on October 9, the storm was about 96 km (60 miles) east of Cape Hatteras, North Carolina, and headed northeast at 24 km/h (15 mph), the National Hurricane Center said in their last advisory concerning Matthew.

As of 08:24 UTC on October 10, Post-Tropical Cyclone "Matthew" was well off the Northeast Coast and expected to move northeastward to just off the Canadian Maritimes today.

Rain associated with the system over the Northeast Coast will come to an end by Monday afternoon into Tuesday, October 11.