A group of researchers from the University of Miami has discovered a new earthquake hazard in the border region between Afghanistan and Pakistan, in a study aimed at the major Chaman and Ghazaband faults in the region. The research showed the Ghazaband Fault holds a much higher potential for a high magnitude earthquake than previously thought, while the Chaman Fault accounts for only a third of the relative plate motion.

The scientists have used the satellite data from ESA's Envisat satellite, collected in the period between 2004 and 2011, to measure the relative motion of the ground and model the faults movement using the time-series analysis technique with an accuracy of only a few millimeters.

According to results, the Ghazaband Fault is responsible for over a half of the relative motion occurring between the Indian and Eurasian tectonic plates, showing a much higher potential for large magnitude earthquakes than previously assumed. One event of such magnitude was a 7.7 earthquake that occurred in Quetta, Pakistan in 1935. Nearly half of the city's population was lost at the time. 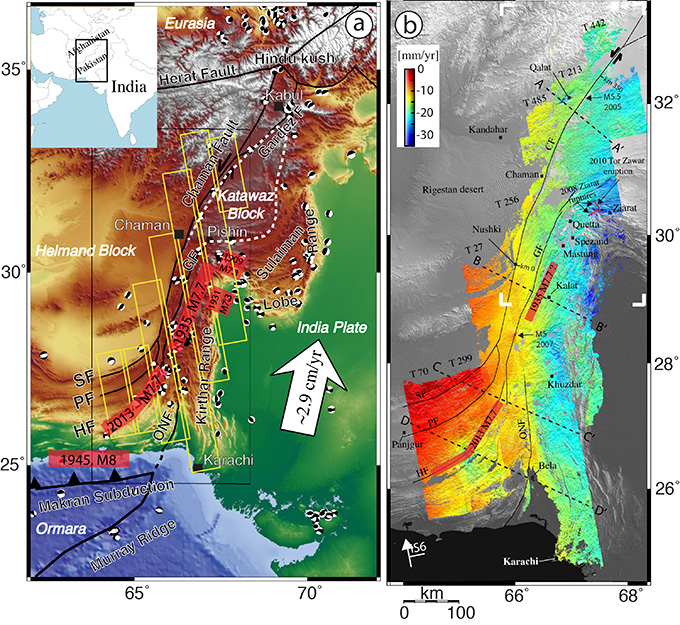 a) Western India plate boundary zone, the Chaman fault and Kabul and b) ground velocity field of the Ghazaband fault and Quetta obtained from SAR imagery of the Envisat satellite. Image credit: The University of Miami

“Quetta’s population of more than one million is in serious danger if an earthquake were to strike. Earthquake-proof construction is vital in avoiding earthquake disasters. Quetta, as well as other cities in the region, is completely unprepared,” explained Falk Amelung, a UM Rosenstiel School professor of geophysics and a coauthor of the study.

The Chaman Fault, extending from southern Pakistan to north Kabul in Afghanistan, known as the largest fault in the region was so far considered to accommodate a large part of the relative plate motion. However, new research revealed it might actually account only about one-third of it, urging the scientists to rethink the tectonics of the area.

A creeping segment, extending fro about 340 km (211 miles), was reported, as well. The rock masses slide against each other in the area, without accumulating stress that would trigger earthquakes: “This is the longest creeping fault ever reported,” said Fattahi.

The discovery of slower than anticipated fault rate and of the long creeping fault explains why no major earthquakes have been reported in the region for more than 500 years. However, the scientists warn this doesn't mean there is no hazard involved.

Featured image: Ground velocity field of the Ghazaband fault and Quetta obtained from SAR imagery of the Envisat satellite. Image credit: The University of Miami