Severe weather conditions sweeping the southeast Australia since June 4, 2016, brought intense storms and major flooding across the affected areas. The state of Tasmania experienced record-breaking rainfalls and river water levels as well as its worst floods in 40 years, according to the Tasmanian State Emergency Service (SES). The total death toll is now 5, and several people are still considered missing. 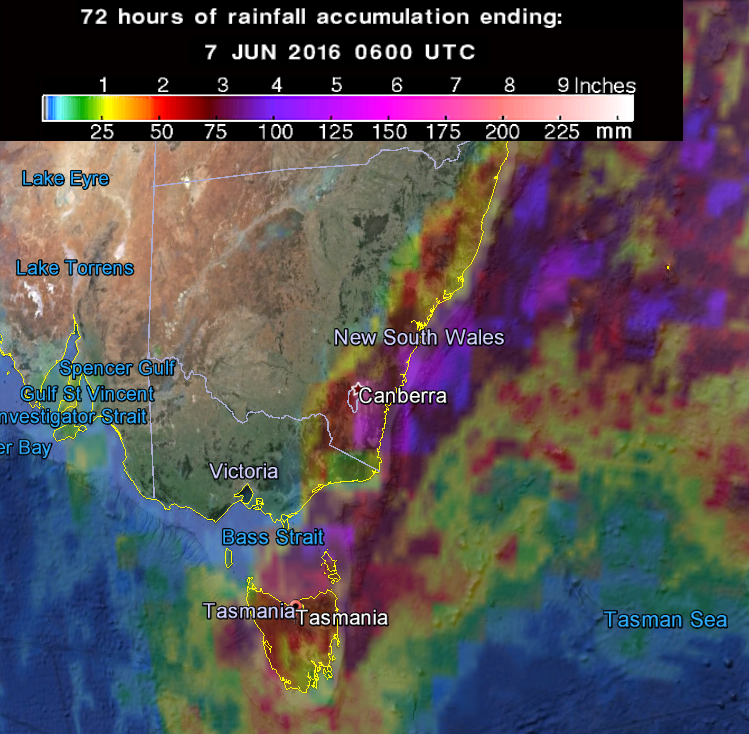 SES reported ongoing floods in the South Esk, Macquarie, and Meander Rivers, and locally heavy flooding across Tasmania. About 80 properties are flooded, and more than 100 roads have been closed. Local authorities advised people to refrain from traveling whenever possible.

Numerous people were forced to evacuate their homes in Latrobe, Ouse, Newstead, the Meander Valley, and Invermay. Since June 5, SES responded to more than 350 calls for help, and emergency teams performed more than 100 flood rescue operations.

Media reported 20 yachts were lost after raging flood waters swept an entire marina out into the sea. A king tide which coincided with the storm devastated the Collaroy beach. Waterfront homes were devastated or severely damaged, and an entire swimming pool from one of the houses reportedly slipped onto the beach.

"The beach is 50 meters (164 feet)  narrower now than it was on Saturday afternoon. The storm is certainly starting to abate, but there are still very large waves, and still a large tide, which are continuing to cause damage along the beachfront,"  said Professor Ian Turner, the director of the Water Research Laboratory at the University of NSW.

Huge amounts of debris were left behind across the beaches of Sydney. One house lost about 10 m of its back yard, according to its tenant: "It was ferocious… it was a hell of a storm," she said.

Since June 6 when major flood alerts were in effect for 7 rivers across the state, the weather conditions have somewhat improved. However, major flood warnings are still in place for the Macquarie, Meander, and South Esk rivers while moderate flood warnings are in effect for the Mersey, North Esk, and Derwent rivers, as of June 7 at 15:00 (local time). Eight flood gates have been closed on the eastern part of the Invermay/Inveresk, and three at Longford.