At 03:00 UTC on June 6, NHC has changed Tropical Storm Watch to a Tropical Storm Warning from Altamaha Sound, Georgia to the Flager/Volusia county line, Florida. TS Warning has been issued south of the Flager/Volusia county line to Sebastian Inlet, Florida. TS Watch has been issued north of Altamaha Sound, Georgia to the South Santee River, South Carolina. 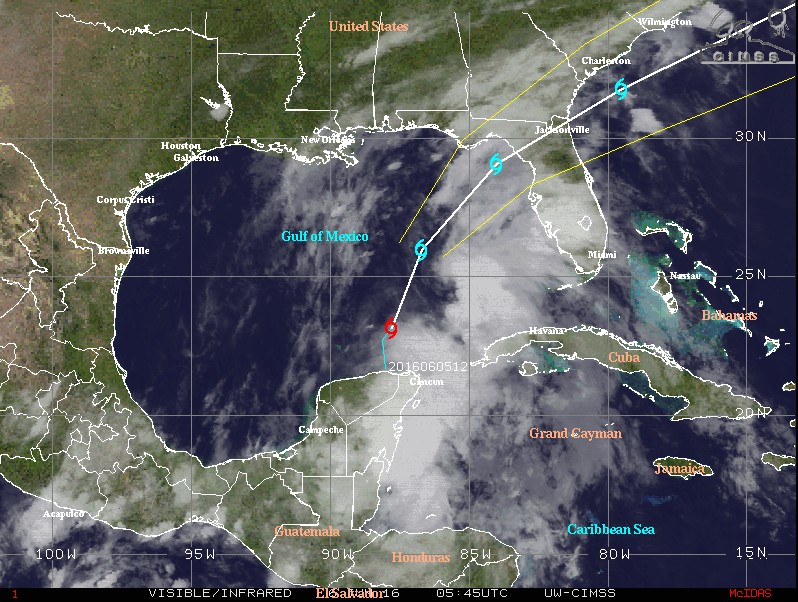 On this track, the center of Colin is forecast to approach the coast of the Florida Big Bend area Monday afternoon or evening (local time). Some strengthening is forecast before Colin reaches the coast of Florida.

Tropical-storm-force winds extend outward up to 300 km (185 miles) to the east of the center.

Colin is expected to produce rainfall amounts of 76.2 mm to 127 mm (3 to 5 inches) with isolated maximum totals of 203.2 mm (8 inches) possible across the northeastern Yucatan Peninsula, western Cuba, western Florida, eastern Georgia, and coastal areas of the Carolinas through Tuesday, June 7.

The combination of a storm surge and the tide will cause normally dry areas near the coast to be flooded by rising waters.  The water could reach the following heights above ground if the peak surge occurs at the time of high tide:

Localized coastal flooding and dangerous surf is possible along the Florida East Coast within the Tropical Storm Watch area.

The deepest water will occur along the immediate coast. Surge-related flooding depends on the relative timing of the surge and the tidal cycle, and can vary greatly over short distances.

A few tornadoes are possible on Monday across portions of Florida and far southern Georgia.