A team of scientists from the University of Southampton discovered evidence of a previously unknown large volcanic eruption in the Caribbean Sea. The eruption was dated to 2.4 million years ago and might be the largest documented volcanic event in the region since that time.

Researchers studied layers of ash, the so-called tephras, in marine sediments to date the eruption. The team analyzed a sediment core recovered by the Integrated Ocean Drilling Program (IODP) Expedition at a site close to a few volcanically active islands in the Lesser Antilles, located 30 km (18.6 miles) southwest of Montserrat and 75 km (46.6 miles) west of Guadeloupe in the northeastern Caribbean Sea.

The used core contained an 18 cm (7 inches) thick layer of tephra, most likely deposited 2.4 million years ago. By analyzing the isotopes from this unusually thick layer, the scientists have identified the origin and magnitude of the large Volcanic Explosivity Index (VEI) equal to 6. For comparison, the largest Montserrat eruptions since 1995 had a VEI between 3 and 4.

"Volcanic eruptions are relatively common in this area of the world, but while they are very disruptive for the local community, as seen on Montserrat over the past 20 years, they do not generally have a major impact on neighboring islands," said Professor Martin Palmer, at the University of Southampton.

"While a large eruption of the scale that we have identified would represent an important hazard to human populations in the wider region if it occurred today, it is very important to note that our research suggests that such events are rare in the Lesser Antilles – there is no indication that another large eruption is imminent." 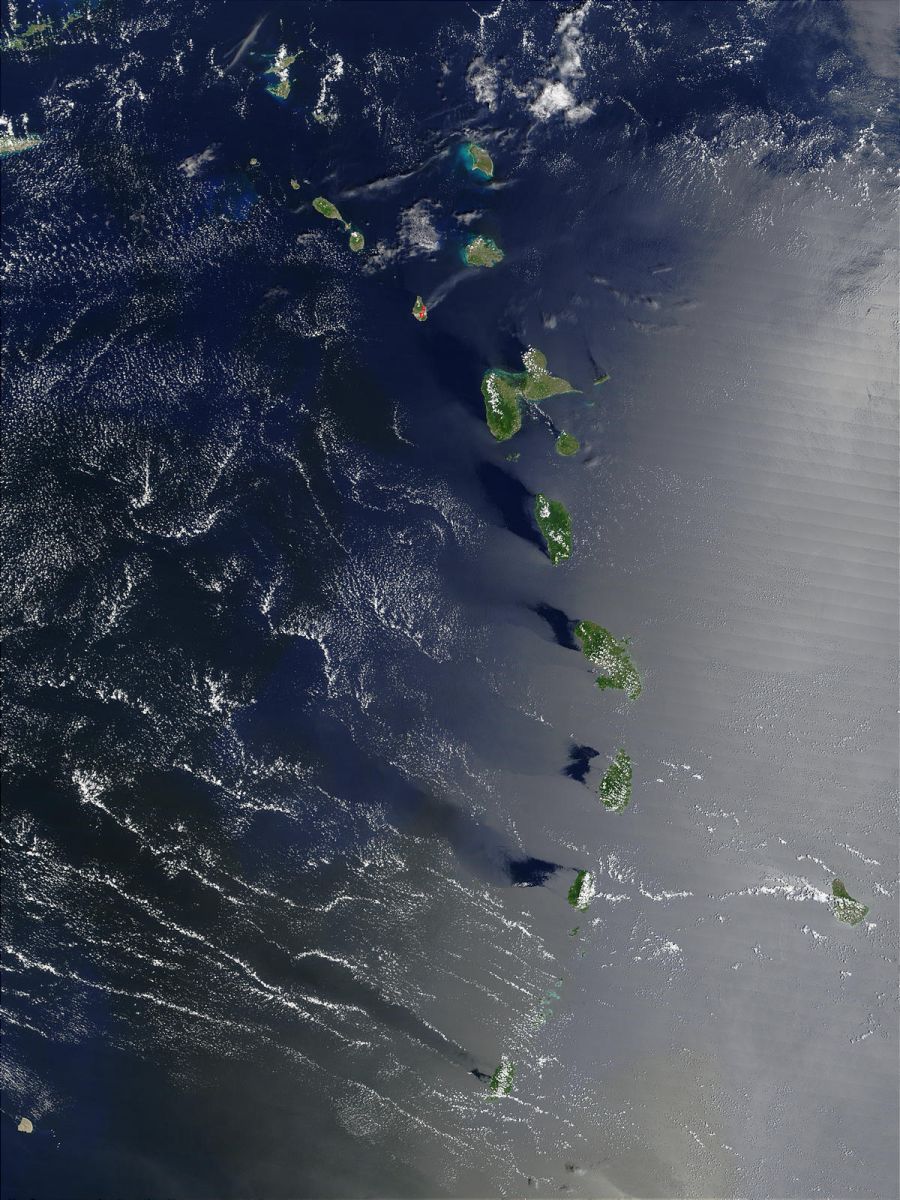 The Lesser Antilles island chain is centered in this true-color Moderate Resolution Imaging Spectroradiometer (MODIS) image from September 20, 2002. From bottom to top through the center are Grenada, St. Vincent (with Barbados to its east), St. Lucia, Fort-de-France, Dominica, Guadeloupe, Montserrat (slightly west of center line), Antigua, and Barbuda. The Lesser Antilles are part of a chain of islands that runs between the tip of Florida and northern South America in the Caribbean Sea. On Montserrat, the thermal signature (marked in red) could be from the Soufriere Hills Volcano. Image credit: Jacques Descloitres, MODIS Rapid Response Team, NASA/GSFC

Results of the study showed the volcanic eruption occurred on Guadeloupe 2.4 million years ago and indicated this is the largest documented volcanic event in the region since then.

"Reconstructing the magnitude of past volcanic eruptions is important to inform predictions about future eruptions and hazards. This is difficult to accomplish from records on land – old eruptions are often eroded away, buried beneath later eruptions, or obscured by vegetation and soil. Most volcanoes are close to the oceans, so much of the erupted material falls into seawater and accumulates on the seafloor," Professor Palmer added.

"It is important to continue these types of study as they allow scientists to build a more complete picture of conditions required to generate unusually large eruptions in settings where they are normally much smaller."