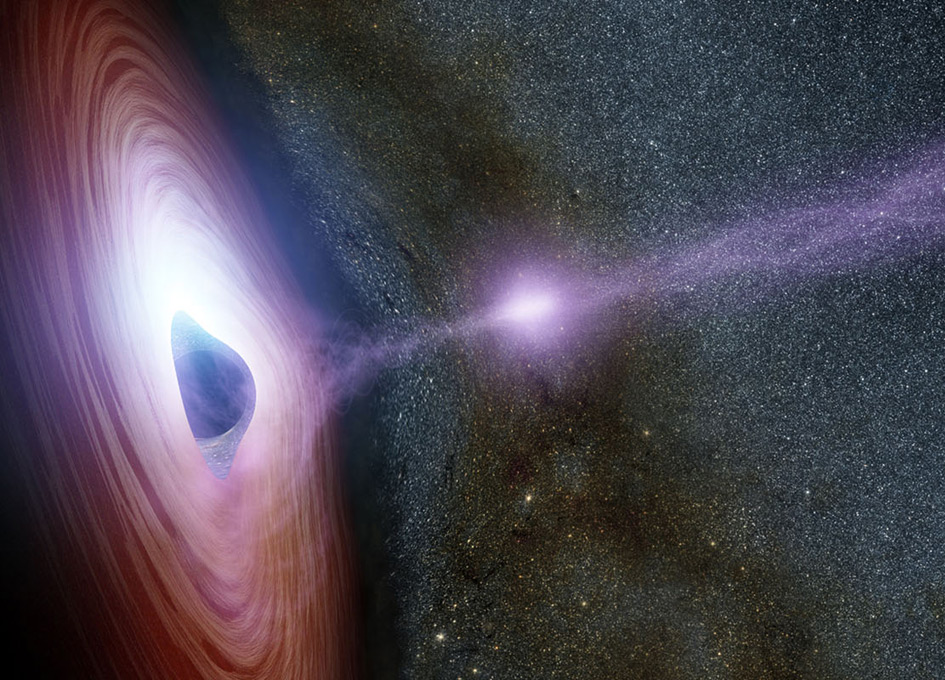 Black holes have always been one of the most mysterious and awe inspiring objects in space. Astronomers have known for some time that black holes periodically emit very powerful flares into space. New observations from NASA's Explorer missions Swift and the Nuclear Spectroscopic Telescope Array, or NuSTAR are giving them a glimpse into the nature and composition of a black hole flare.

Both Swift and NuSTAR recently observed a supermassive black hole sending out a massive X-ray flare when the highly energetic coronas surrounding the black hole launch away from them.

"This is the first time we have been able to link the launching of the corona to a flare," said Dan Wilkins of Saint Mary's University in Halifax, Canada, lead author of a new paper on the results appearing in the Monthly Notices of the Royal Astronomical Society. "This will help us understand how supermassive black holes power some of the brightest objects in the universe."

Supermassive black holes are extremely dense objects which have no light of their own but they are surrounded by highly energized coronas which generate X-ray light, how these coronas are formed is currently unknown. Another major source of light are the huge disks of gas which rapidly move around the black holes are heated up due to the intense gravitational pull and start emitting different types of light.

The study has also thrown light on the very structure of the coronas. The data shows that coronas are "light bulb" like structures which are positioned above and below the black hole along its axis of rotation.

The current data was recorded when Swift, which monitors the sky for cosmic outbursts of X-rays and gamma rays, caught a large flare coming from the supermassive black hole called Markarian 335, or Mrk 335, located 324 million light-years away in the direction of the constellation Pegasus.

Image shows how a corona can create a flare of X-rays around a black hole.

"Something very strange happened in 2007, when Mrk 335 faded by a factor of 30. What we have found is that it continues to erupt in flares but has not reached the brightness levels and stability seen before," said Luigi Gallo, the principal investigator for the project at Saint Mary's University. Another co-author, Dirk Grupe of Morehead State University in Kentucky, has been using Swift to regularly monitor the black hole since 2007.

After Swift caught Mrk 335 emit another flare in September 2014, one of the authors of the current study requested the NuSTAR team to focus on the black hole. Eight days later, NuSTAR focused its X-ray telescope on the black hole and ended up viewing the latter half of the flare event.Once the data was analyzed, the astronomers concluded that what they had witnessed was in fact the black hole's corona ejecting and collapsing completely.

"The corona gathered inward at first and then launched upwards like a jet," said Wilkins. "We still don't know how jets in black holes form, but it's an exciting possibility that this black hole's corona was beginning to form the base of a jet before it collapsed."

Coronas are known to move as extremely high speeds. According to the researchers, the corona moving away from Mrk 335 was moving at astounding 20 percent of the speed of light. Whenever the corona starts moving at such high speeds, its light brightens considerably due to an effect called  relativistic Doppler boosting and this coincides with a powerful X-ray flare as noted by the researchers.

"The nature of the energetic source of X-rays we call the corona is mysterious, but now with the ability to see dramatic changes like this we are getting clues about its size and structure," said Fiona Harrison, the principal investigator of NuSTAR at the California Institute of Technology in Pasadena, who was not affiliated with the study.

However, astronomers still do not understand what causes the ejection of the coronas in the first place. This and many other queries continue to remain.