Chapala, now an extremely severe cyclonic storm, equivalent to a category 4 hurricane, is steadily approaching Yemen. The system's strength is currently decreasing, however it is still expected to make landfall over central Yemen with hurricane force by November 2, 2015, according to the Joint Typhoon Warning Center (JTWC). Residents of eastern Yemen and parts of southwest Oman should remain highly alert and closely follow the news as the storm approaches.

Tropical Cyclone "Chapala" developed in the Arabian Sea on October 28, and rapidly intensified into a system of hurricane strength by October 29. The maximum sustained wind speeds of the system were near 240.8 km/h (149.6 mph) on October 30 at 15:00 UTC, which placed it into a super cyclonic storm class, equivalent to category 5 hurricane. 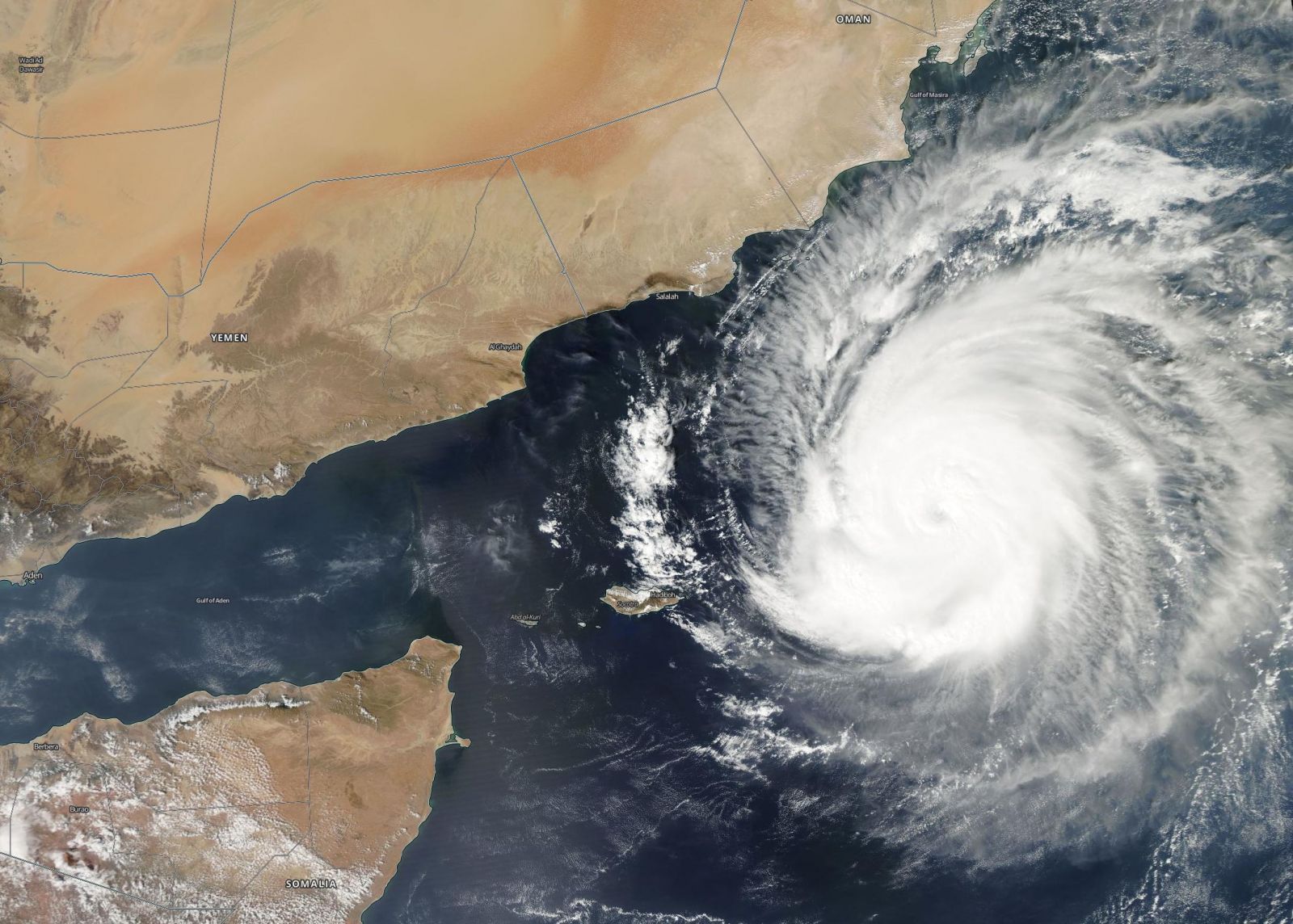 According to meteorologist Eric Holthaus, tropical cyclones near the Arabian Peninsula are a very rare occurrence. Only two storms of hurricane strength have been recorded to make landfall in Oman, and only one storm of tropical strength hit Yemen. All of them happened after 2007. 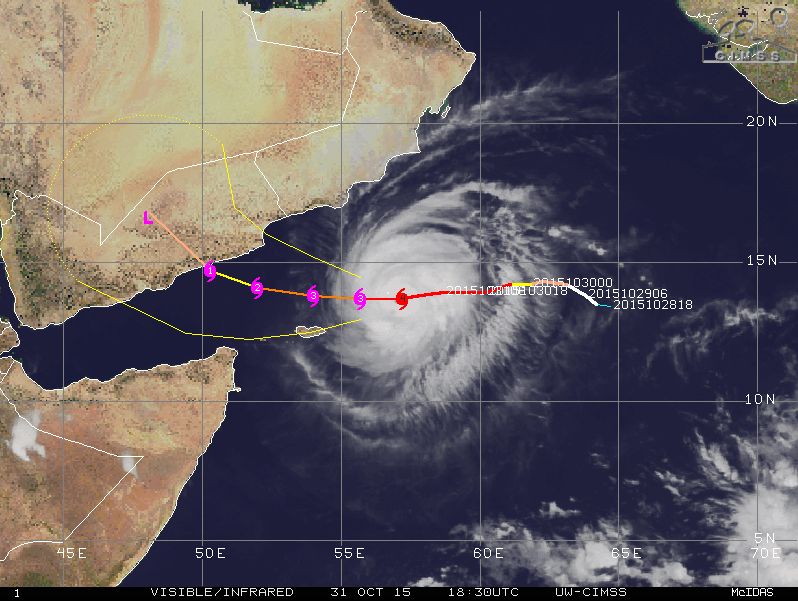 The cyclone is currently tracking along the southern periphery of a deep layered sub-tropical ridge and is expected to make landfall over central Yemen in the next 48 hour, JTWC reports. Chapala, now an extremely severe cyclonic storm, equivalent to category 4 hurricane, is expected to further weaken while it approaches the Arabian Peninsula, due to the contact with dry air emanating from the land.

Despite undergoing weakening, Chapala will most likely hit the land with hurricane force winds, before dissipating due to interaction with the rugged and dry terrain prevailing across Yemen. 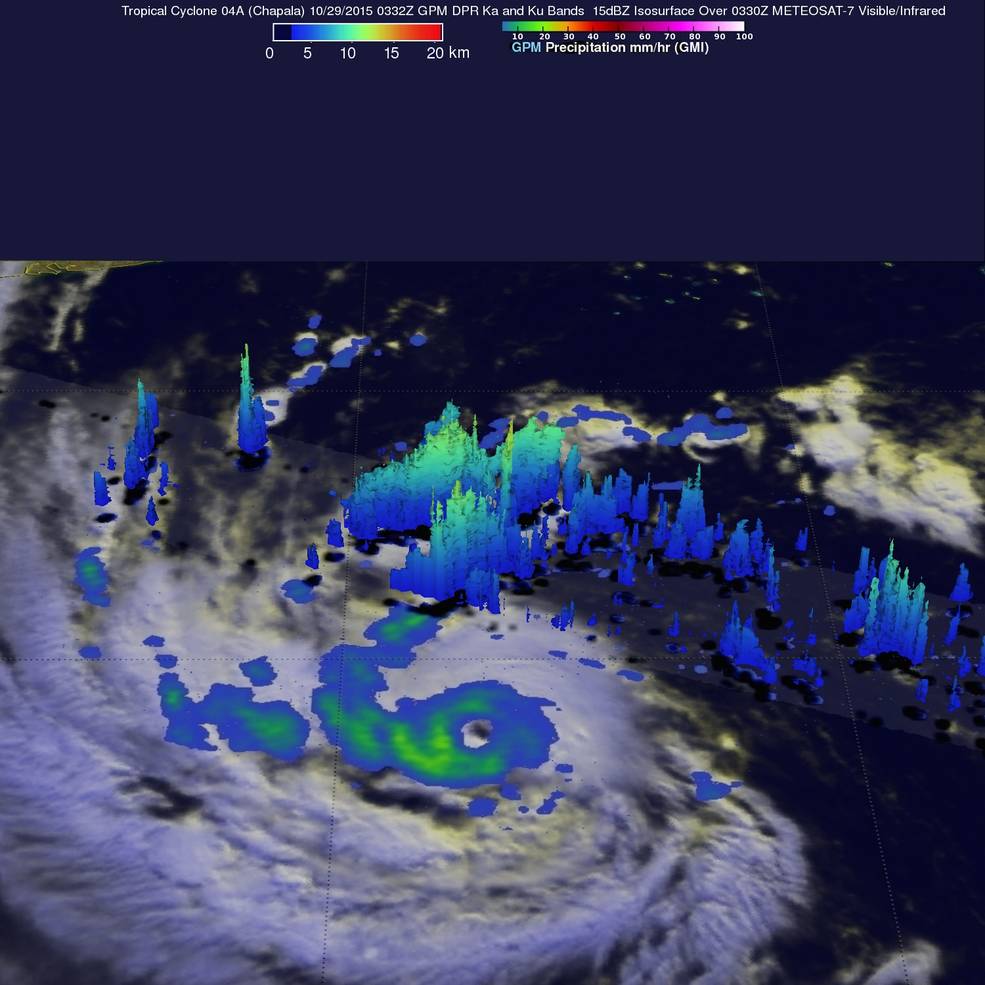 GPM 3-D image of rainfall and cloud heights of Chapala on October 28 found rainfall near the center of about 28 mm (1.1 inches) per hour and up to 64 mm (2.5 inches) per hour east of center. Image credit: NASA/JAXA/SSAI, Hal Pierce

The system is expected to bring severe rainfall, hurricane force winds and coastal flooding to areas within 50 km (30 miles) of the center's landfall. Eastern Yemen and parts of southwest Oman could, on average, receive between 100 and 200 mm (4 to 8 inches) of rainfall, an amount capable of inducing life-threatening flooding across the affected parts.

Meteorologists warn that residents of the forementioned areas should be placed on high alert, and closely monitor the situation as the system approaches.

Featured image: GPM 3-D image of rainfall and cloud heights of Chapala on October 28 found rainfall near the center of about 28 mm (1.1 inches) per hour and up to 64 mm (2.5 inches) per hour east of center. Image credit: NASA/JAXA/SSAI, Hal Pierce