Major floods hit parts of central and southeastern Texas, as of October 30, 2015, media reports. Several tornado events, some of which have yet to be confirmed, have been observed to inflict significant damage south and east of Houston, across the eastern Harris County and the cities of D'Hanis and Floresville. 6 people have died so far, and 2 have gone missing.

Severe weather system, looming over parts of Texas since October 30, wreaked havoc across the already flood stricken grounds. Severe rainstorms accompanied with strong winds have caused flooding across the central and southeastern parts of the state. Several tornadoes have also been reported across three cities in central Texas, according to media reports. 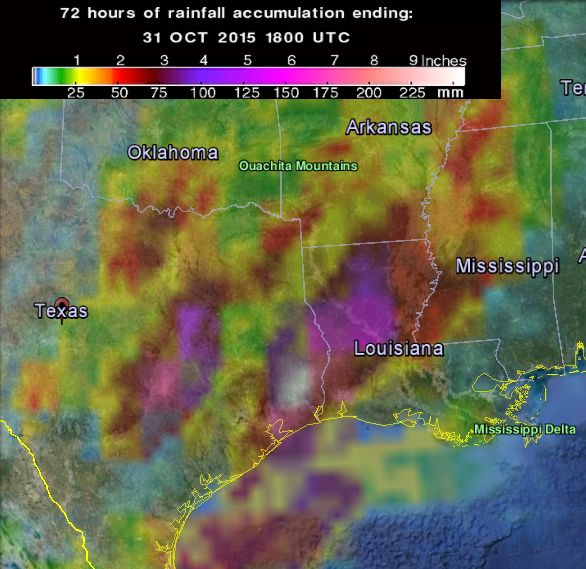 US Geological Survey (USGS) reported accumulated precipitation amounts exceeded 254 mm (10 inches) across the San Antonio area on October 30. More than 457.2 mm (18 inches) of rain was reported to fall in Austin while between 101.6 and 177.8 mm (4 to 7 inches) was reported across southern Harris County since October 30, causing flash floods across the affected areas.

About 127 mm (5 inches) of rain was reported to fall in Houston area in only a few hours, causing over 90 water rescues across the area, according to the Houston Fire Department. Heavy rainfall and raging flood waters have caused traffic disruptions across the area, and the city's light rail system has been forced to suspend its services.

12:56pm – Even our Austin Airport ASOS is underwater! It was around 9 inches for the day before comms quit. pic.twitter.com/4ezewlECed

6 people have been reported dead so far and at least 2 have gone missing, the Weather Channel reports. Interstate 35 between San Antonio and Austin has been overflown with flooding waters, and the officials have warned drivers to stay off the road. The Austin-Bergstrom International Airport was closed throughout October 30, after 355.6 mm (14 inches) of rainfall swept the area.​

Several possible tornado touchdowns have been reported south and east of Houston that caused damage to 3 local communities, as of October 31, according to the National Weather Service (NWS). A tornado, confirmed by radar, devastated between 10 and 30 homes in eastern Harris County subdivision, the media reported.

Numerous mobile homes have been overturned and about 44 000 people have lost their power supplies due to extreme weather conditions in the area of east Texas. The cities of D'Hanis and Floresville suffered a strong blow from possible, although yet unconfirmed tornado strikes.

Extreme weather system is expected to travel eastward and affect Louisana and Mississipi by November 1.