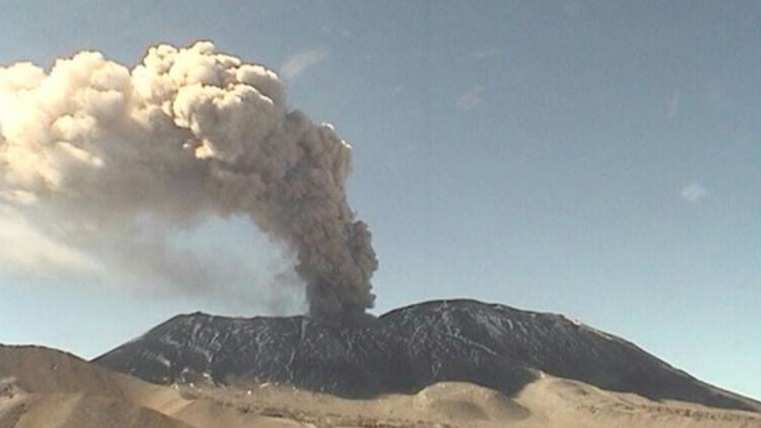 It is unclear whether the eruption was caused by fresh magma or, more likely, by an explosion of overheated water (phreatic activity), Volcano Discovery said.

There had not been any particular indication of new activity. According to Sernageomin's routine reports, seismic activity under the volcano, dominated by earthquakes related to internal fluid movements, had been progressively decreasing during the past months, from a total of 207 in May to 62 events in September.

This was Lascar's first eruption since April 2013. According to GVP, Sernageomin reported that during March [2013] a web camera monitoring Láscar recorded white gas plumes rising 600 m above the crater. At night during April 2 – 4 incandescence from the crater was observed. On April 3 increased emissions from the crater fluctuated from white to gray, indicating possible ash. Plumes rose 320 m and drifted SE. Seismicity remained at normal levels during the increased emissions. On April 5 the Alert Level was raised to Yellow.

The largest eruption took place about 26,500 years ago, and following the eruption of the Tumbres scoria flow about 9000 years ago, activity shifted back to the eastern edifice, where three overlapping craters were formed. Frequent small-to-moderate explosive eruptions have been recorded since the mid-19th century, along with periodic larger eruptions that produced ashfall hundreds of kilometers away. The largest historical eruption took place in 1993, producing pyroclastic flows to 8.5 km NW of the summit and ashfall in Buenos Aires. (GVP)