A team of scientists from the University of Cape Town and University of the Western Cape in South Africa have discovered that supermassive black holes in the distant universe are spinning out radio jets in the same direction. This is the first time researchers found an alignment of the jets of galaxies over a large volume of space.

The discovery was enabled by a deep radio imaging survey with the Giant Metrewave Radio Telescope (GMRT) in the India. The telescope recorded the radio waves from the ELAIS-N1 area of the universe in a three-year period.

The supermassive black holes at the centers of galaxies in question produce the aligned jets. This alignment is possible only in case all the black holes are spinning in the same direction.

"Since these black holes don’t know about each other or have any way of exchanging information or influencing each other directly over such vast scales, this spin alignment must have occurred during the formation of the galaxies in the early universe," said Prof Andrew Russ Taylor, joint UWC/UCT SKA Chair, Director of the recently-launched Inter-University Institute for Data Intensive Astronomy, and principal author of the Monthly Notices study. 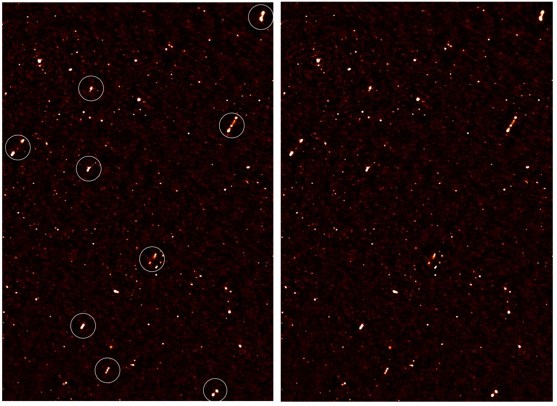 Research results imply the existence of a coherent spin, formed from the primordial mass fluctuations, of this volume of space, responsible for seeding the creation of the large-scale structure of the universe.

The alignment was unexpectedly revealed, following the initial exploration of the faintest radio sources in the universe with the South African MeerKAT and the Square Kilometre Array (SKA), world's most powerful radio telescope.

After the initial image has been made, there were regions where the spin axes of galaxies lined up, within the large-scale structure.

Prior observations detected deviations from isotropy in the orientations of galaxies, but the radio images in question presented the first chance to use jets to explore alignments if galaxies on scales up to 100 Mpc. The total intensity radio emissions observed are not affected by scattering, extinction and Faraday Rotation, issues that usually arise in other studies.

Discovered alignments and preferred orientations can provide a deeper insight into the orientation and evolution of the galaxies in relation to large-scale structures, and the motions in the primordial matter fluctuations that give rise to the structure of the Universe.

Cosmic magnetic fields, fields associated with exotic particles, the so-called axions, and cosmic strings are some of the possible influences capable of creating an alignment in galaxies on scales larger than galaxy clusters.

"This is not obviously expected based on our current understanding of cosmology. It’s a bizarre finding," said UWC Prof Romeel Dave, SARChI Chair in Cosmology with Multi-Wavelength Data, responsible for leading a team developing plans for universe simulations that could explore the growth of large-scale structure from a theoretical perspective.

According to the opinions of the scientific community, the discovery is a mystery.

"GMRT is one of the largest and most sensitive radio telescope arrays in the world but we really need MeerKAT to make the very sensitive maps, over a very large area and with great detail, that will be necessary to differentiate between possible explanations. It opens up a whole new research area for these instruments, which will probe as deeply into the and as far back as we can go – it’s going to be an exciting time to be an astronomer," explained Prof Taylor.

No theories so far have predicted a large-scale spin distribution, and this discovery presents a challenge which needs to be accounted for, as well as an opportunity to increase our knowledge about the workings of our cosmos.

"We’re beginning to understand how the large-scale structure of the universe came about, starting from the Big Bang and growing as a result of disturbances in the early universe, to what we have today, and that helps us explore what the universe of tomorrow will be like," concluded Prof Taylor.

Featured image: An image of the deep radio map covering the ELAIS-N1 region, with aligned galaxy jets. The image on the left has white circles around the aligned galaxies; the image on the right is without the circles. Image credit: Prof Russ Taylor