Gravitational waves, the ripples in the spacetime fabric, were observed for the first time, the scientists confirmed on February 11, 2016. The waves resulted from a cataclysmic event of two black holes merging in the distant universe. Their existence, first predicted in 1915, by Albert Einstein's general theory of relativity, has now opened an unprecedented new window in our knowledge of cosmos.

The gravitational waves were detected on September 14, 2015, at 09:51 UTC, by the twin Laser Interferometer Gravitational-wave Observatory (LIGO) detectors in Livingston, Louisiana, and Hanford, Washington, US. The discovery was made by the LIGO Scientific Collaboration, which includes the GEO Collaboration and the Australian Consortium for Interferometric Gravitational Astronomy, and the Virgo Collaboration using the data from the two LIGO detectors.

According to experts, the observed gravitational waves were produced in the final fraction of a second of the merger of two black holes to produce a single, more massive spinning black hole. This collision of two black holes had been predicted but never observed. 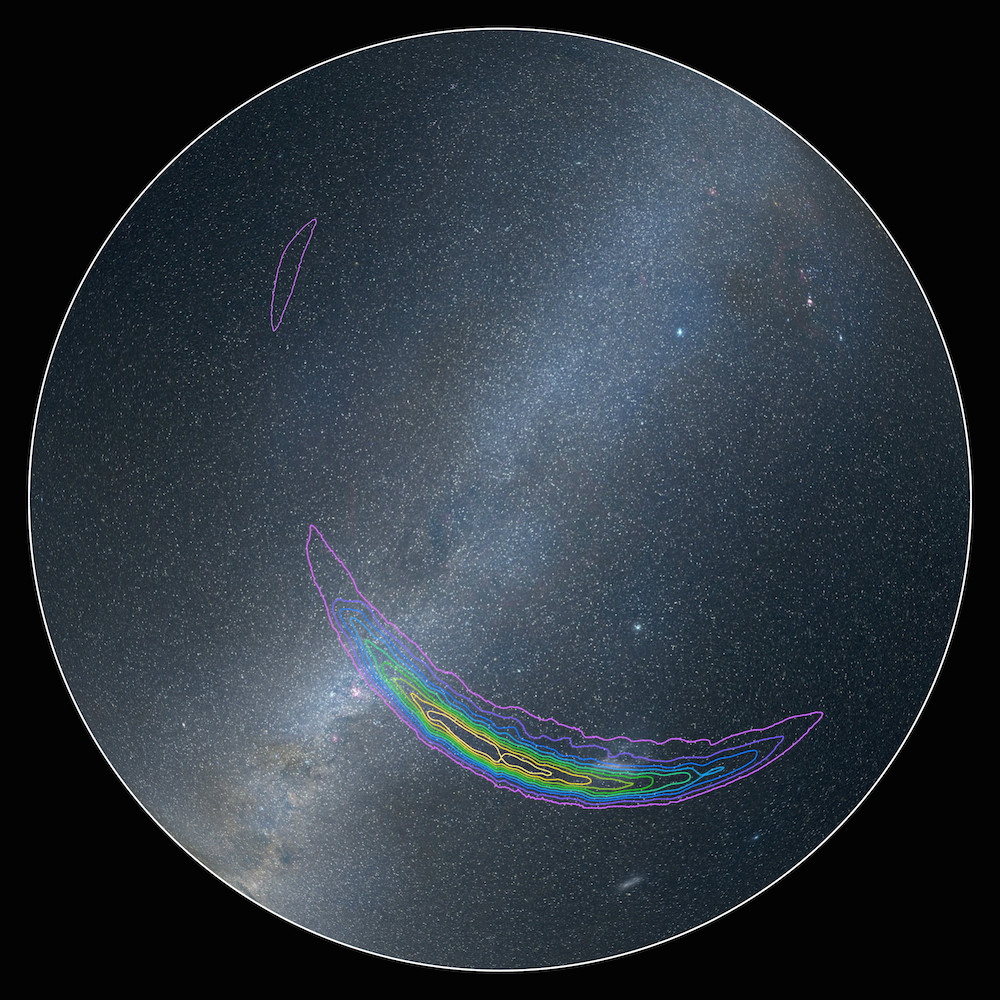 The approximate location of the source of gravitational waves detected on September 14, 2015, by the twin LIGO facilities is shown on this sky map of the southern hemisphere. The colored lines represent different probabilities for where the signal originated: the purple line defines the region where the signal is predicted to have come from with a 90% confidence level; the inner yellow line defines the target region at a 10% confidence level. Image credit: LIGO 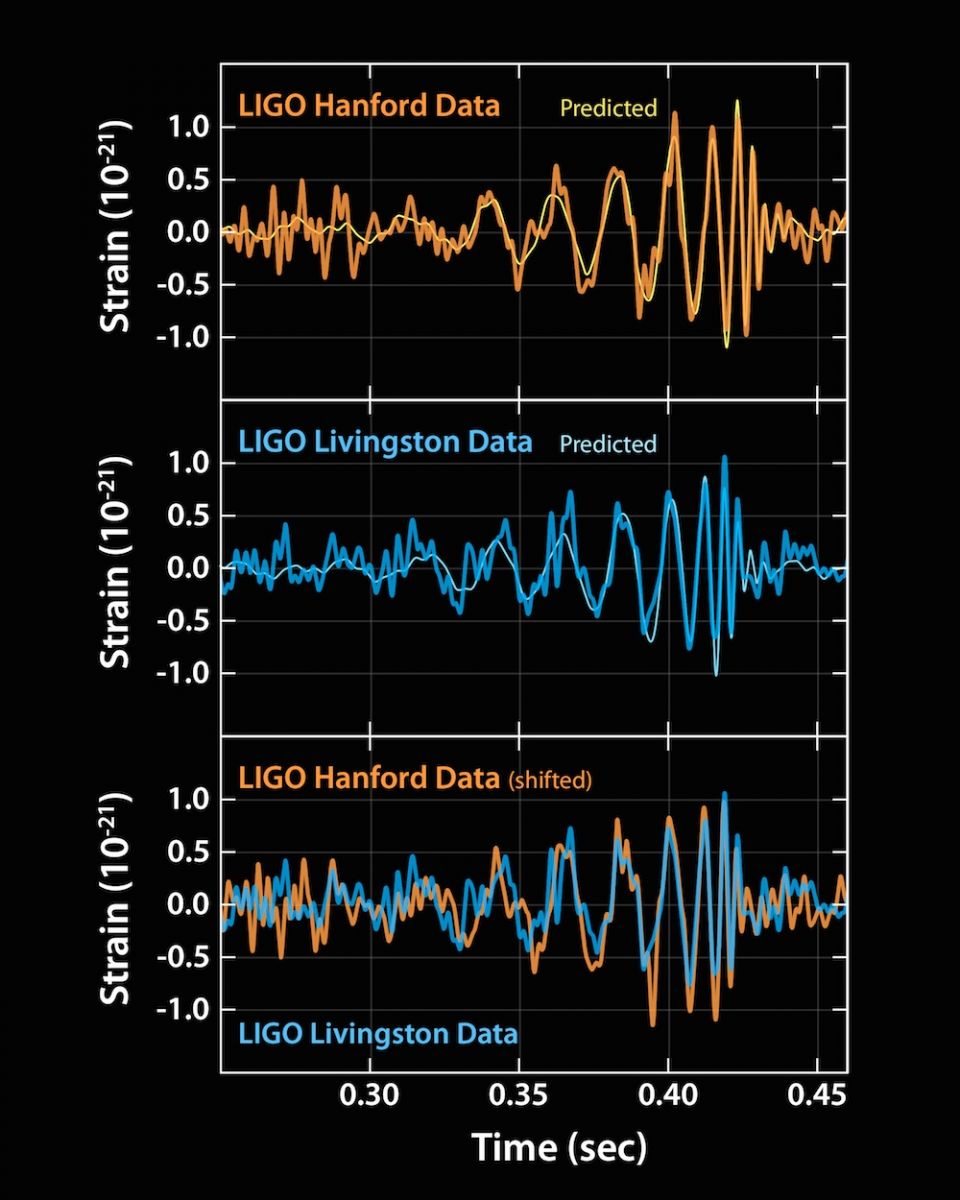 These plots show the signals of gravitational waves detected by the twin LIGO observatories at Livingston, Louisiana, and Hanford, Washington. The signals came from two merging black holes, each about 30 times the mass of our sun, lying 1.3 billion light-years away. The top two plots show data received at Livingston and Hanford, along with the predicted shapes for the waveform.Time is plotted on the X-axis and strain on the Y-axis. Strain represents the fractional amount by which distances are distorted. As the plots reveal, the LIGO data very closely match Einstein's predictions. The final plot compares data from both detectors; both detectors witnessed the same event, confirming the detection. Image credit: LIGO

The detector in Livingston recorded the event 7 milliseconds before the detector in Hanford, and by looking at the arrival time of the signals, the source was located in the Southern Hemisphere.

According to general relativity, a pair of black holes orbiting around each other lose energy through the emission of gravitational waves, causing them to gradually approach each other over billions of years, and then much more quickly in the final minutes.

During the final fraction of a second, the two black holes collide into each other at nearly one-half the speed of light and form a single more massive black hole, converting a portion of the combined black holes’ mass to energy, according to Einstein’s formula E=mc2. This energy is emitted as a strong final burst of gravitational waves. It is these gravitational waves that LIGO has observed.

Joseph Taylor, Jr., and his colleagues first demonstrated the existence of gravitational waves in the 1970s and 80s. In 1974, Taylor and Russell Hulse discovered a binary system composed of a pulsar orbiting a neutron star.

Taylor and Joel M. Weisberg in 1982 found that the orbit of the pulsar was slowly shrinking over time because of the release of energy in the form of gravitational waves. For discovering the pulsar and showing that it would make possible this particular gravitational wave measurement, Hulse and Taylor were awarded the Nobel Prize in Physics in 1993.

The new LIGO discovery is the first observation of gravitational waves themselves, made by measuring the tiny disturbances the waves make to space and time as they pass through the earth.

"Our observation of gravitational waves accomplishes an ambitious goal set out over 5 decades ago to directly detect this elusive phenomenon and better understand the universe, and, fittingly, fulfills Einstein’s legacy on the 100th anniversary of his general theory of relativity," said Caltech’s David H. Reitze, executive director of the LIGO Laboratory.

The beginning of a new era

"This detection is the beginning of a new era: The field of gravitational wave astronomy is now a reality," said Gabriela González, LSC spokesperson and professor of physics and astronomy at Louisiana State University.

"With this discovery, we humans are embarking on a marvelous new quest: the quest to explore the warped side of the universe—objects and phenomena that are made from warped spacetime. Colliding black holes and gravitational waves are our first beautiful examples," said Kip Thorne, Caltech’s Richard P. Feynman Professor of Theoretical Physics, Emeritus.

At each observatory, the 4-km (2.5 miles) long L-shaped LIGO interferometer uses laser light split into two beams that travel back and forth down the arms (four-foot diameter tubes kept under a near-perfect vacuum). The beams are used to monitor the distance between mirrors precisely positioned at the ends of the arms. According to Einstein’s theory, the distance between the mirrors will change by an infinitesimal amount when a gravitational wave passes by the detector. A change in the lengths of the arms smaller than one ten-thousandth the diameter of a proton (10-19 meter) can be detected. 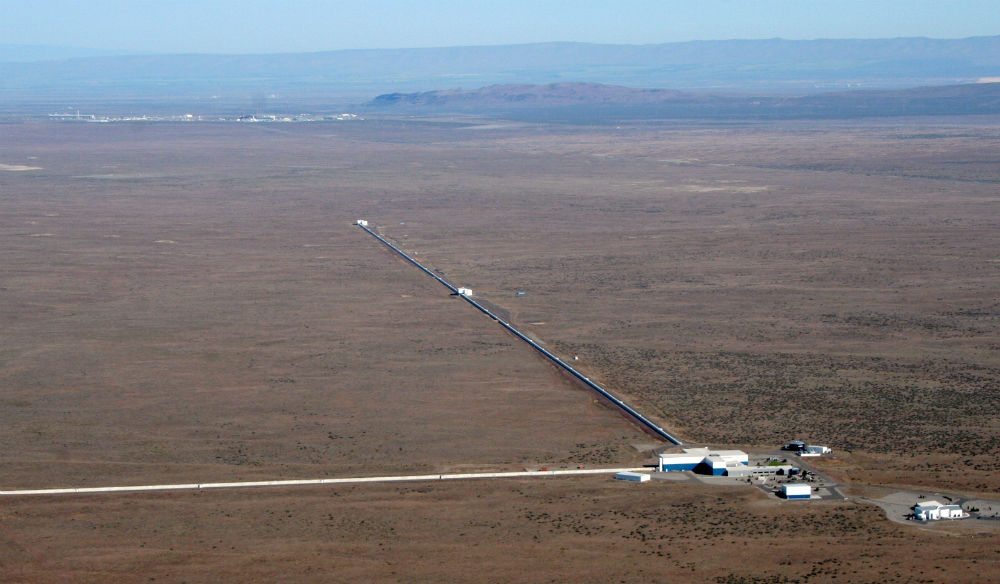 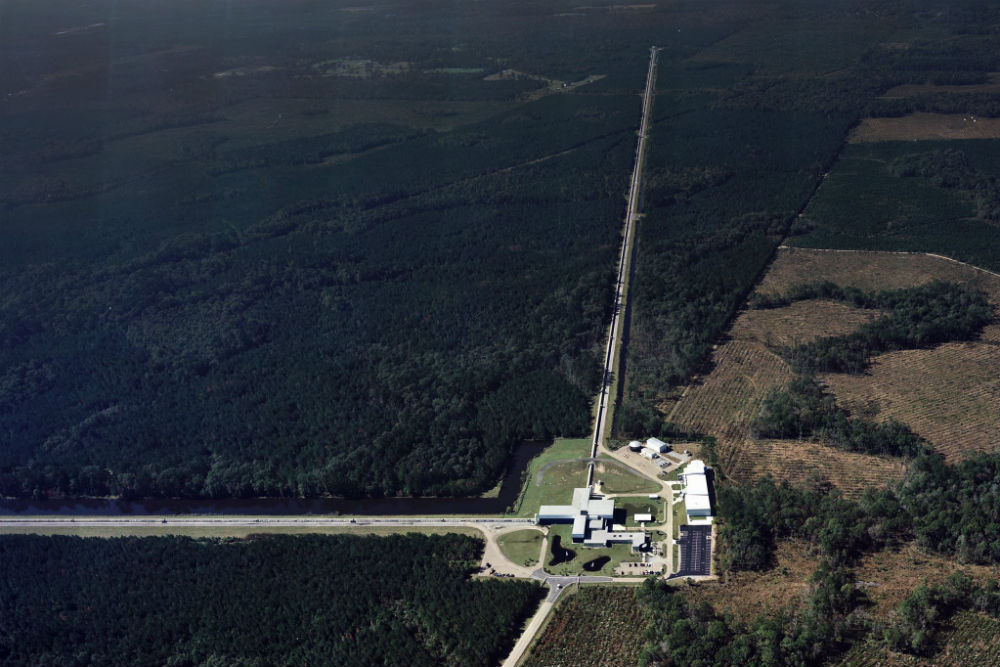 The LIGO Laboratory operates two detector sites, one near Hanford in eastern Washington, and another near Livingston, Louisiana. This photo shows the Livingston detector site. Image credit: Caltech/MIT/LIGO Lab

Independent and widely separated observatories are necessary to determine the direction of the event causing the gravitational waves, and also to verify that the signals come from space and are not from some other local phenomenon.

Toward this end, the LIGO Laboratory is working closely with scientists in India at the Inter-University Centre for Astronomy and Astrophysics, the Raja Ramanna Centre for Advanced Technology, and the Institute for Plasma to establish a third Advanced LIGO detector on the Indian subcontinent. Awaiting approval by the government of India, it could be operational early in the next decade. The additional detector will greatly improve the ability of the global detector network to localize gravitational-wave sources. 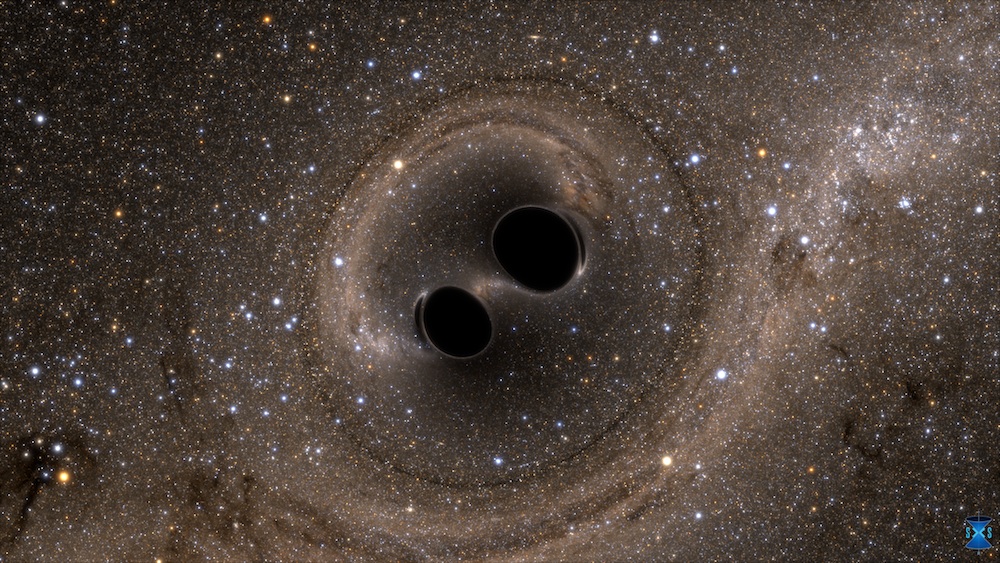 The collision of two black holes, an event detected for the first time ever by the Laser Interferometer Gravitational-Wave Observatory, or LIGO, is seen in this still from a computer simulation. LIGO detected gravitational waves, or ripples in space and time, generated as the black holes merged. The simulation shows what the merger would look like if we could somehow get a closer look. Time has been slowed by a factor of 100. The stars appear warped due to the strong gravity of the black holes. Image credit: SXS

"Hopefully, this first observation will accelerate the construction of a global network of detectors to enable accurate source location in the era of multi-messenger astronomy," said David McClelland, professor of physics and director of the Centre for Gravitational Physics at the Australian National University.

Featured image: The collision of two black holes, an event detected for the first time ever by the Laser Interferometer Gravitational-Wave Observatory, or LIGO, is seen in this still from a computer simulation. LIGO detected gravitational waves, or ripples in space and time, generated as the black holes merged. The simulation shows what the merger would look like if we could somehow get a closer look. Time has been slowed by a factor of 100. The stars appear warped due to the strong gravity of the black holes. Image credit: SXS