The notion of space-time is an imaginary concept that was first introduced by the mathematician Hermann Minkowski. The original non-Euclidion geometry of Riemann dealt only with space as an amorphous continuum. But, Minkowski made it metric. Riemann did not present time as a separate dimension or new variable. He introduced it only as a supporting notion for his logarithm branch cuts.

"The abstract concept of n-dimensional geometry to facilitate the geometric representation of functions" of a complex variable (especially logarithm branch cut). Such researches have become a necessity for many parts of mathematics, e.g., for the treatment of many-valued analytical functions.

On the Hypotheses which lie at the Bases of Geometry, Bernhard Riemann. [Nature, Vol. VIII. Nos. 183, 184, pp. 14–17, 36, 37.] "A branch cut is a curve (with ends possibly open, closed, or half-open) in the complex plane across which an analytic multivalued function is discontinuous. For convenience, branch cuts are often taken as lines or line segments. Branch cuts (even those consisting of curves) are also known as cut lines (Arfken 1985, p. 397), slits (Kahan 1987), or branch lines." 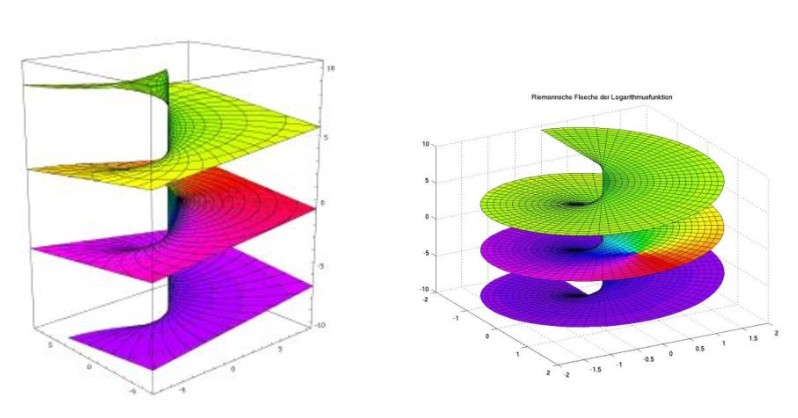 Minkowski's four-dimensional space was transformed by using an imaginary (√-1.ct ) term instead of the real time t. So the coordinates of Minkowski's Four-Dimensional Continuum X1, X2, X3, X4 are all treated as space coordinates. Originally, they were X1, X2, X3,√-1. ct). In other words, the 4th space dimension X4 is the imaginary term √-1.ct.

This imaginary 4-dimensional unification of time and space was named by Minkowski as 'world'. Minkowski’s 4th dimension never intended to use it in curved space, and was meant to be Euclidean dimensions. Thus, in the physical sense, space-time as a fourth dimension is nothing more than Minkowski’s cerebral and mathematical imagination.

This is how time for mathematical reason became 4th dimensional space. This baseless assumption from a physical point of view became the basic theory or rather the foundation for the concepts of spacetime curvature, ripples of spacetime etc. These concepts were further developed to so many other pseudo physics theories, like relativistic gravitation, which then went on to produce the Black Hole myth. Also, if there’s no such thing as spacetime, but only time and space, then the notion of singularity cannot be proposed. In other words, there’s no possibility of expanding space and time from a singularity at the beginning of time.

However, the concept of the curvature of space has no observational or experimental evidence. We can talk of curved lines, paths, and surfaces in space, but the notion that space itself can be curved has neither empirical evidence nor correct mathematical foundations. Thus, in the objective reality, not in the subjective reality of Einstein, the curvature of space is nothing more than a mathematical pipe-dream.

In 1938, in the book that he published with Leopold Infeld, The Evolution of physics, Einstein said, "Physical concepts are free creations of the human mind and are not, however, it may seem, uniquely determined by the physical world." The concept of the spacetime is definitely the free creation of Einstein’s mind not the reality of the physical world.

Nikola Tesla characterized the notion of curved spacetime as absurd, delusional and entirely impossible from a physics point of view. He is correct and his statements about it are the best he ever wrote.

"Supposing that the bodies act upon the surrounding space causing curving of the same, it appears to my simple mind that the curved spaces must react on the bodies, and produce the opposite effects, straightening out the curves. Since action and reaction are coexistent, it follows that the supposed curvature of space is entirely impossible. But even if it existed it would not explain the motions of the bodies as observed. Only the existence of a field of force can account for the motions of the bodies as observed, and its assumption dispenses with space curvature. All literature on this subject is futile and destined to oblivion. So are all attempts to explain the workings of the universe without recognizing the existence of the ether and the indispensable function it plays in the phenomena."

The discarding of the ether was one of the greatest tragedies of the 20th century's physics. The working of the Universe cannot be explained on scientific basis without recognizing the existence of the ether. But, Stephen Hawking does not agree with this Universal fact that can be seen with any uncontaminated mind. In his Brief History of Time book, Hawking wrote, "that Einstein cut through the ether and solved the speed of light problem once and for all". In reality, however, Einstein introduced the biggest tragedy to physics. Space is 99.99% of the visible Universe, just like in the case of the atom. But, it is not an empty space as current physics claims. Thus, that means Einstein discarded 99.99% of the physical reality of the Universe.

Jamal S. Shrair has a B.Sc. in Electrical Engineering from Canada’s Queen’s University and a M.Sc. in experimental and particle physics from the Eötvös Loránd University of Science in Budapest, Hungary. His M.Sc. thesis project was an investigation of cosmic muons using a Cherenkov detector. In his post-graduate studies, he joined the faculty of electrical engineering and informatics at the Budapest University of Technology and Economics, where he studied surface physics and electron devices. The title of his thesis project is „The application of Nanoporous Silicon Layers for Efficient Gas Sensors”.