Why does the floor of calderas lift disproportionately without erupting? Researchers from UNIGE and Roma Tre used thermal and experimental models to explain one of the least-understood processes in volcanology: 'Caldera resurgence'

A spectacular proof of our planet's activity, calderas are huge topographic depressions, similar to flat-bottomed craters, with a diameter of several tens of kilometers. They are formed by large volcanic eruptions, and sometimes experience an inflation of their floor of up to a kilometer, caused by magma injection. This well-known process, dubbed "caldera resurgence," has been observed several times and yet remains one of the least understood in volcanology.

The enigmatic question was: Why after an eruption the arrival of new magma does not produce another major eruption but resurgence? A team of researchers from the University of Roma Tre, Italy, and the University of Geneva (UNIGE), Switzerland, shows that the non-erupted magma left after the caldera-forming eruption behaves as a "rubber sheet" that inhibits the rise to the surface of the newly injected magma. The research was published in Nature Communications. 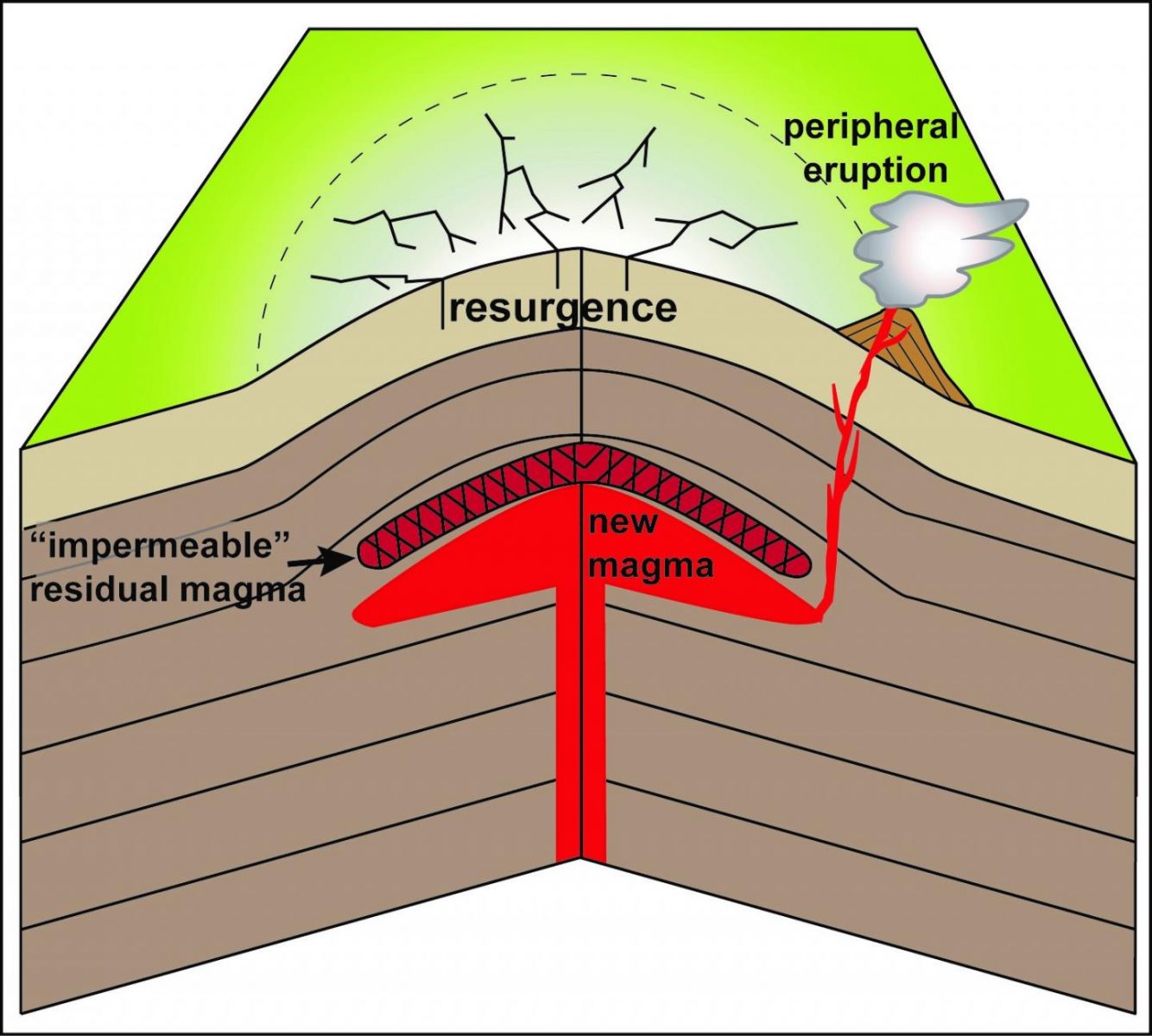 A caldera forms when a magma chamber is partially emptied by a large eruption and its roof collapses producing a depression at the surface. After this catastrophic event, in a slow process that can last thousands of years, the caldera floor may start to lift disproportionately but no eruption follows. Resurgence does not immediately follow caldera formation, suggesting that it is not driven by the residual magma left in the reservoir after the collapse, but rather by the injection of new magma.

The magma behaves as a rubber sheet

"The magma is not entirely removed from the magma chamber during the caldera-forming eruption. We used thermal modeling to determine how this residual magma evolves over time, and which role it plays in the resurgence process", explains Luca Caricchi, associate professor at the Department of Earth Sciences of the UNIGE Faculty of Science. The magma, hotter than the rocks surrounding the magma chamber, cools progressively and its viscosity increases. The higher viscosity of the leftover magma, with respect to the newly injected magma, makes it behave as a rubber sheet stopping the propagation of the new magma to the surface.

These results were corroborated by experiments. The leftover magma was replaced by a silicone layer and the newly injected magma by less viscous vegetable oil. The contrast in viscosity between these two materials is equivalent to the contrast observed between the two magmas in nature. "Independently of the depth of the silicone layer, its presence always impedes the propagation of the newly injected magma to the surface" – says Federico Galetto, a researcher at the Department of Science of the University of Roma Tre.

The model developed by the researchers provides a theoretical framework to account for the transition from magma eruption to accumulation. Valerio Acocella, an associate professor at the Department of Eart Sciences of the University of Roma Tre, adds: "The process we discuss is essential not only to develop resurgence but also for the formation of the magma reservoirs responsible for the largest eruptions on Earth."