A strong El Niño continues to persist in the tropical Pacific Ocean, Australian Bureau of Meteorology (BOM) reported on October 7, 2015. At the same time an emerging positive Indian Ocean Dipole (IOD) is contributing to strengthening the phenomenon, causing a significant shift towards a drier than average October across Australia.

An El Niño phenomenon generally causes a below-average winter-spring rainfall over the eastern half of Australia, and is responsible for a nation wide drought in the period of its activity.

September 2015 was the third driest month recorded in Australia, so far. Rainfall amounts have been extremely low in the last 12 months in the southwest of Western Australia, southeast South Australia and throughout Victoria, according to BOM.

El Niño event is expected to peak by the end of 2015, and then start to weaken in the beginning of 2016, according to the climate models.

Usually, an IOD event starts to decrease its impact in November, as the monsoon trough shifts south over the IOD region, changing the wind patterns. 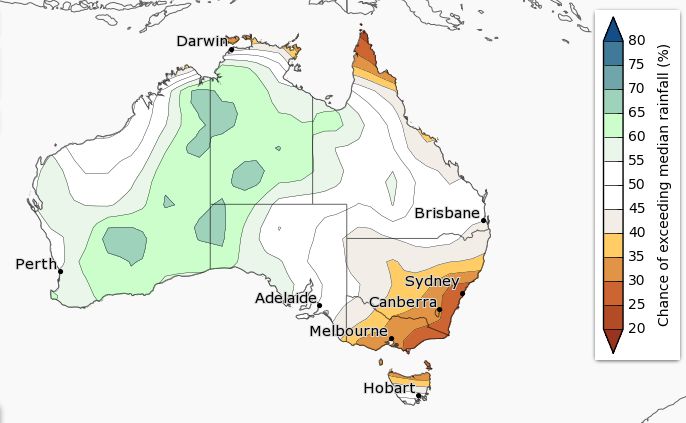 The chances of above median rainfall in Australia between October and December 2015. Image credit: BOM

Up until now, the El Niño combined with higher than usual sea surface temperatures (SSTs) in the Indian Ocean was increasing the chances of above-average rainfall season for Western Australia, South Australia and central Australia. However, IOD values have become positive, with September 2015 values being the highest on record since 2006, which has strongly reinforced the El Niño signal. 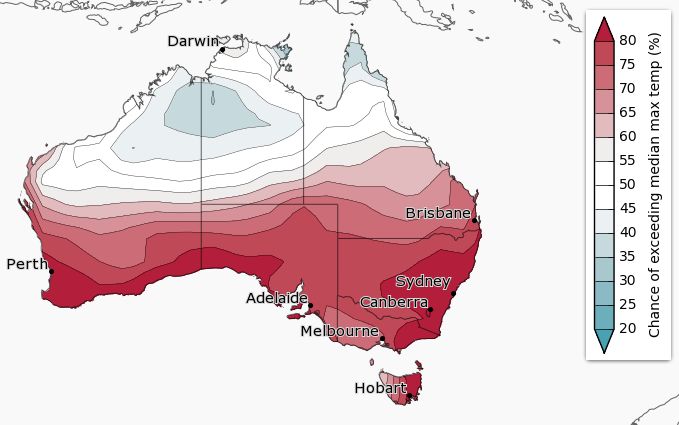 Chances of above median maximum temperature in Australia between October and December 2015. Image credit: BOM

At the same time, this suggests high chances of warmer days and nights south of the tropics. Overall, the period between October and December will most probably be drier than on average across the southeast and northeast, with parts of central Australia experiencing wetter than usual conditions. Warmer days and nights are likely across Australia, apart from the region of the northern tropics.