A state of emergency was declared across Calabria in southern Italy, after the violent storm outbreak caused flash floods across the area on August 12, 2015. Severe weather has caused the traffic shut-down in the affected areas, and building evacuation, as about 40 000 people have been affected by the event.

Calabria Governor, Mario Oliviero has declared a state of emergency across the region and asked for national assistance, after the strong rainstorm caused heavy flooding across parts of southern Italy.

A few regions across Italy, especially the southern part, have been affected by the heavy rainfall that caused floods and landslides over the last couple of days.

The historic town of Rossano and Corigliano in Cosenza province were hit the hardest. 40 000 people, resident in Rossano have been affected by the violent weather outbreak, as of August 12. Torrential floods have swept away cars while 500 people, tourists and locals, had to evacuate as floodwaters threatened a campsite. 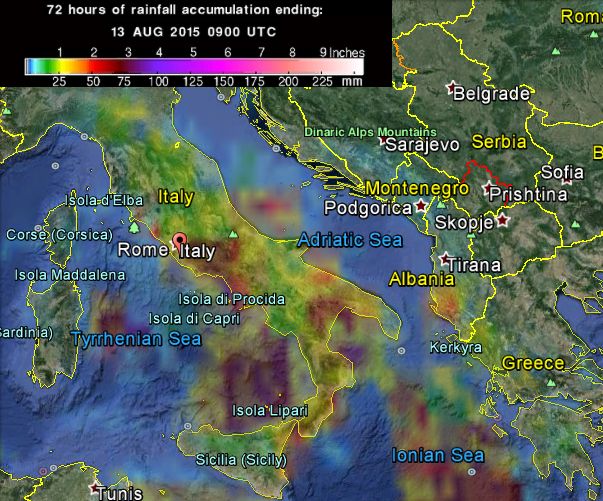 Roads and homes were also flooded across the province, and a number of people were stranded in their homes. Police had to perform a rescue operation to save 40 people trapped in a flood stricken hotel. Rail service in the region has also been closed due to severe weather conditions.​

Two people were reported dead due to severe weather related incidents; one man died in Cilento town in the province of Salermo and another person was killed in Quittengo in Piedmont.

Light to moderate rain has been forecasted to affect southern Italy over the next 12 hours.