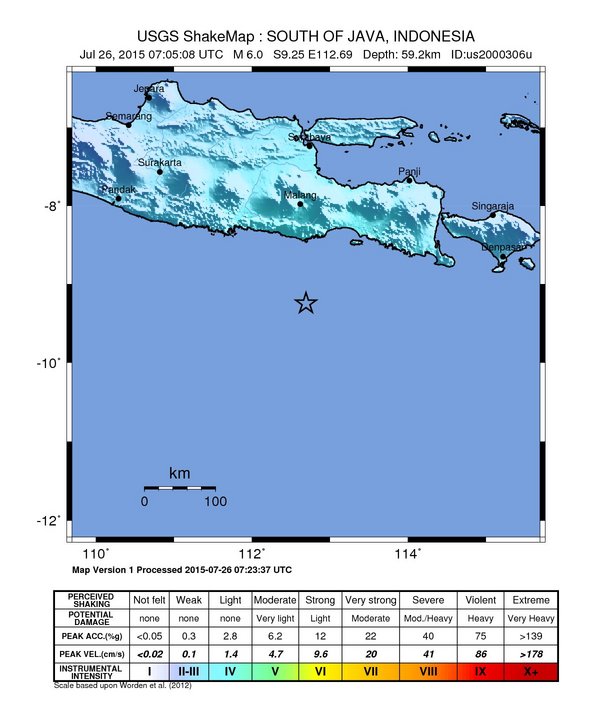 Indonesia is world’s largest archipelago, prone to earthquakes due to its location on an arc of volcanoes and fault lines in the Pacific Basin known as the “Ring of Fire.”

M9.1 earthquake which hit off the tip of the country’s Sumatra Island on December 26, 2004 triggered a tsunami that killed 230 000 people in a dozen countries.

Large thrust earthquakes close to the Java trench are typically interplate faulting events along the slab interface between the Australia and Sunda plates. These earthquakes also generally have high tsunamigenic potential due to their shallow hypocentral depths. In some cases, these events have demonstrated slow moment-release, and have been defined as ‘tsunami’ earthquakes, where rupture is large in the weak crustal layers very close to the seafloor. These events are categorized by tsunamis that are significantly larger than predicted by the earthquake???s magnitude. The most notable tsunami earthquakes in the Java region occurred on June 2, 1994 (M7.8) and July 17, 2006 (M7.7). The 1994 event produced a tsunami with wave run-up heights of 13 m, killing over 200 people. The 2006 event produced a tsunami of up to 15 m, and killed 730 people. While both of these tsunami earthquakes were characterized by rupture along thrust faults, they were followed by an abundance of normal faulting aftershocks. These aftershocks are interpreted to result from extension within the subducting Australia plate, while the mainshocks represented interplate faulting between the Australia and Sunda plates. (USGS)