A swarm of earthquakes that started in December 2014 along the border of the Juan de Fuca and North American plates, northwest of Vancouver Island, British Columbia – Canada, continued into 2015 with two moderately strong earthquakes measuring M4.5 and 5.2 on the Richter scale.

According to John Clague, a Simon Fraser University professor, a larger earthquake off Vancouver Island’s shore could be around the corner.

By January 5, 2015 they registered a total of 39 moderate to strong earthquakes in the same region, with the strongest one being 10-km deep, M5.4 on January 2, 2015. See the map and a complete list of quakes below.

“It is an earthquake-prone territory, but this is a fairly large number of earthquakes to have in such a short period. It’s possible we won’t know until time passes that these could be foreshocks of a larger earthquake in the same area, something in the magnitude six or seven range,” Clague said.

Although the slew of tremors have been frequent, there’s no direct link for it to trigger the “big one” further south on the Juan de Fuca plate and the Cascadia Subduction Zone, he explained and added that while it is normal for a cluster of earthquakes to hit along the border of the Juan de Fuca and North American plates, it’s unlikely any damage will result from a seven-magnitude quake, as long as it remains offshore. 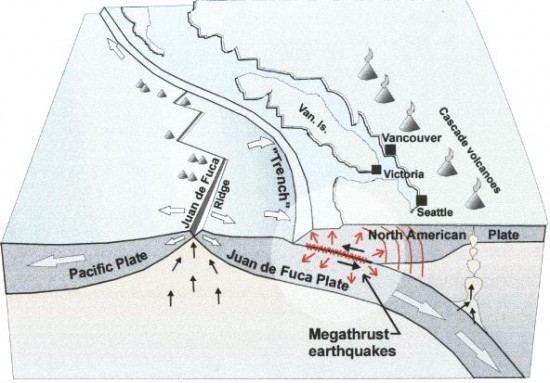 There is good evidence that the Juan de Fuca and North America plates are currently locked together, causing strain to build up in the earth's crust. It is this squeezing of the crust that causes the 300 or so small earthquakes that are located in southwestern British Columbia each year, and the less-frequent, once per decade, on average, damaging crustal earthquakes (e.g., a magnitude 7.3 earthquake on central Vancouver Island in 1946).

At some time in the future, these plates will snap loose, generating a huge offshore "subduction" earthquake – one similar to the 1964 M=9.2 Alaska earthquake, or the 1960 M=9.5 Chile earthquake. Current crustal deformation measurements in this area provide evidence for this model. Geological evidence also indicates that huge subduction earthquakes have struck this coast every 300 – 800 years. (Earthquakes Canada) 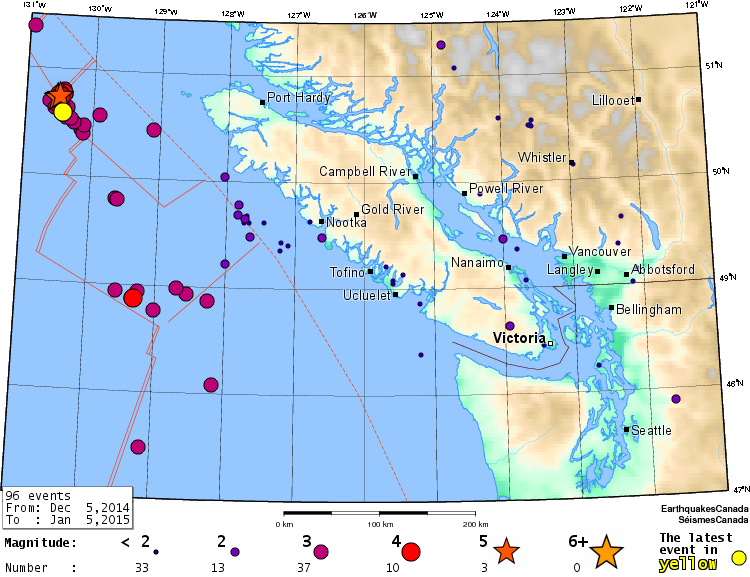