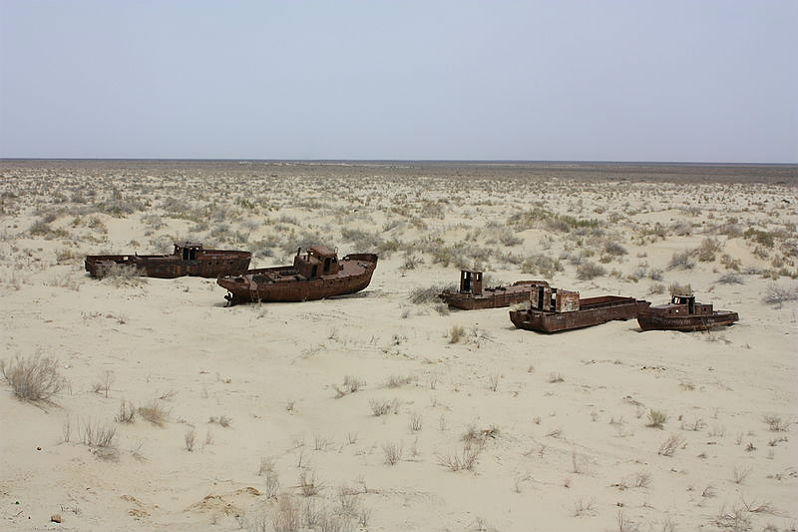 Summer 2014 marked the first time the eastern basin of the South Aral Sea has completely dried. The once-extensive lake in Central Asia has been shrinking markedly since the 1960s.

The main causative factor until the 1960s was the periodic westward diversion of the Amu Dar’ya, the main influent river, towards the Caspian Sea by both natural and human forces. The post-1960 recession, however, was overwhelmingly the result of unsustainable irrigation development. The lake’s modern recession has caused a broad range of severe negative ecological, economic and human welfare problems.

In the 1950s and 1960s, the government of the former Soviet Union diverted the Amu Darya and the Syr Darya rivers to irrigate farmland. The diversion began the lake's gradual retreat. By the 2000, the lake had already separated into the North (Small) Aral Sea in Kazakhstan and the South (Large) Aral Sea in Uzbekistan. The South Aral had further split into western and eastern lobes by the 2009.

This image pair from the Moderate Resolution Imaging Spectroradiometer (MODIS) on NASA's Terra satellite shows the sea without its eastern lobe on August 25, 2000 (left). Substantial changes are apparent when compared to an image from August 19, 2014 (right), and again when compared to the approximate location of the shoreline in 1960 (black outline). (NASA Earth Observatory image by Jesse Allen, using data from the Level 1 and Atmospheres Active Distribution System(LAADS). Caption by Kathryn Hansen)

According to Philip Micklin, a geographer emeritus from Western Michigan University and an Aral Sea expert, this is likely the first time it has completely dried in 600 years, since Medieval desiccation associated with diversion of Amu Darya to the Caspian Sea.

Less rain and snow in the watershed that starts in the distant Pamir Mountains has greatly reduced water flow on the Amu Darya in 2014, resulted in another desiccation. In addition, huge amounts of river water continue to be withdrawn for irrigation. The eastern lobe of the South Aral nearly dried in 2009 and then saw a huge rebound in 2010. Water levels continued to fluctuate annually in alternately dry and wet years. 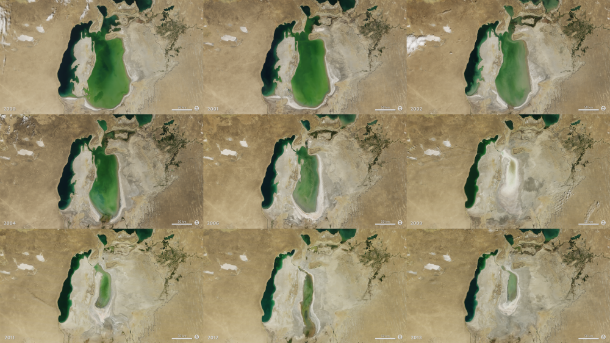 The shrinking of the Aral Sea: NASA satellite images illustrate an environmental crisis over 13 years (the 1960 extent of the sea is outlined in black) (Image credit: NASA)

Any hope for Aral Sea?

The maximum water level decline was more than 26 m, whereas the lake surface area decreased 88% and the water volume 92%. The lake salinity increased by more than 20-fold. Prior to the modern recession, the Aral Sea experienced a number of water level declines and subsequent recoveries over the last 10 millennia.

Partial restoration of portions of the lake is still feasible. A project to raise the Small (northern) Sea was completed in fall 2005, raising its water level by 2 m, and lowering its salinity to a level not much higher than the early 1960 levels. Its ecological recovery has been dramatic, and a new project to improve further the northern Aral was recently announced. Improving the southern lake would be much more difficult and expensive. 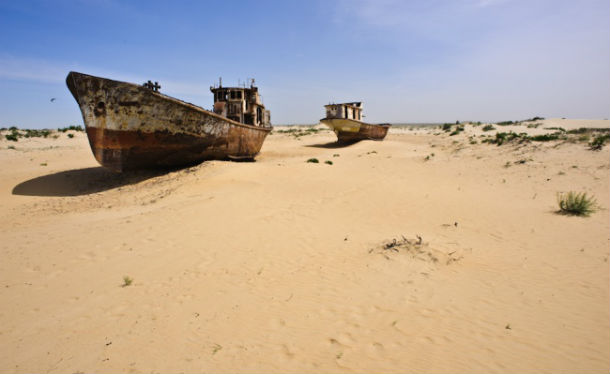 Abandonned ships near the fishing town of Moynaq in Uzbekistan in April 2008. (Credit: Russavia/Wikimedia)

A project to save the deep Western Basin partially is technically feasible, however, and should be given careful evaluation. It is important to repair and preserve what is left of the deltas of the two tributary rivers, Syr Dar’ya and Amu Dar’ya, as these two rivers are of great ecological and economic value, and act as biological refugia for endemic species of the Aral Sea. (>>>)

Featured image: Abandoned ships near the fishing town of Moynaq in Uzbekistan in April 2008. (Credit: Russavia/Wikimedia)