Tropical Storm "Halong" rapidly intensified over the last 24 hours and became Category 4 typhoon. The storm formed late July 2014 in the open waters of the Northwestern Pacific, strengthened and continued on its track through the Marianas Islands. The system is expected to continue intensifying for the next two days before it begins a weakening trend. It is expected to pass near Okinawa sometime on August 6 as Category 3 typhoon.

According to the warning issued at 12:15 UTC today by PAGASA, Typhoon "Halong" entered Philippine Area of Responsibility (PAR) and was named "Jose". PAGASA said Typhoon "Jose" will not yet affect any part of the country. However, the Southwest Monsoon will bring occasional rains over Metro Manila, Central Luzon, Ilocos Region, CALABARZON and MIMAROPA. 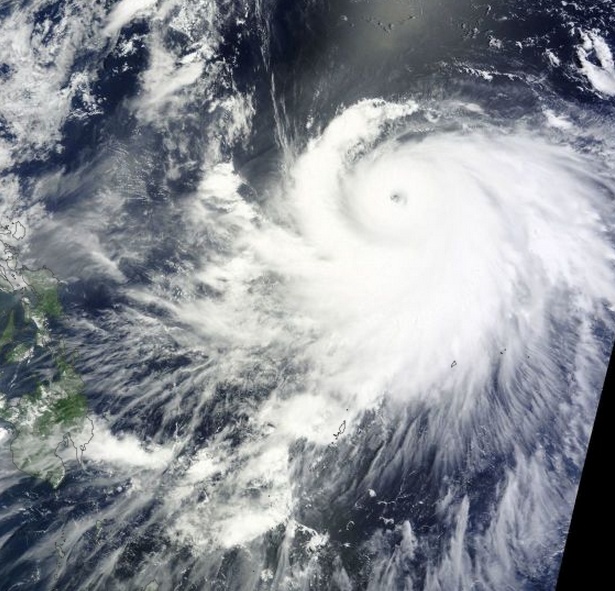 When Aqua satellite passed over "Halong" on July 29 at 03:29 UTC the infrared data showed very cold, high thunderstorm cloud top temperatures of powerful storms surrounding the center, with what appears to be an eye developing. Microwave satellite data also showed a small eye, with tightly-curved bands of thunderstorms wrapping into it. 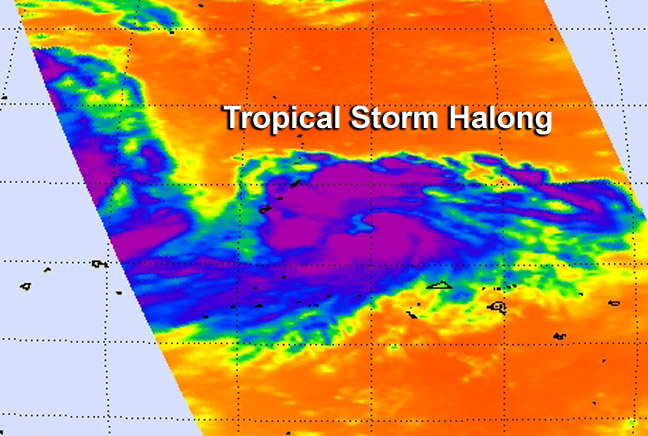 By July 30, there were two tropical low pressure areas in the Northwestern Pacific Ocean and they were close enough to each other to be captured in one image generated from data gathered by NASA's Aqua satellite. Tropical Storm Warning was in effect for Guam and a Typhoon Warning was issued for Rota. 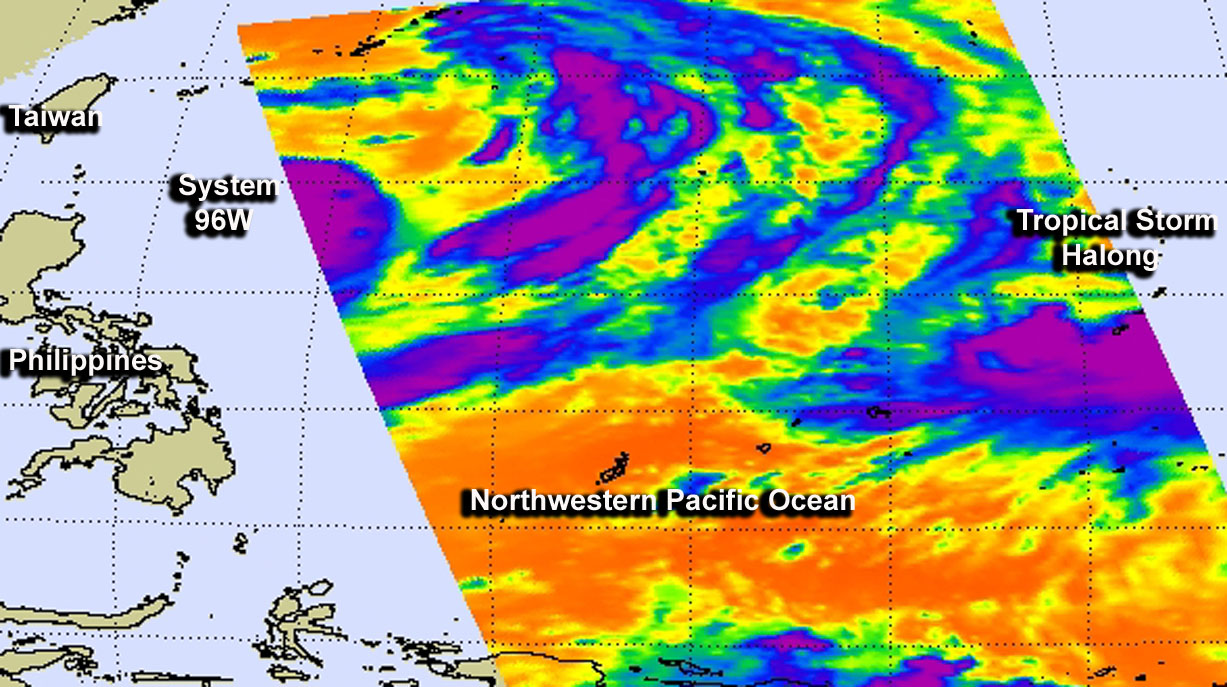 NASA's Aqua satellite flew over both Tropical Storm Halong and developing System 96W early on July 30 and the Atmospheric Infrared Sounder (AIRS) instrument captured infrared data on them in one image. Both systems showed powerful thunderstorms stretching high into the troposphere with cloud top temperatures as cold as -63F/-52C. Those thunderstorms have the potential for heavy rainfall.

System 96W was located near 19.9 north latitude and 130.5 east longitude, about 416 nautical miles south-southeast of Kadena Air Base, Okinawa, Japan. The JTWC described System 96W as a monsoon depression with improved deep convection begins to consolidate as a typical tropical cyclone. Maximum sustained surface winds are estimated between 20 to 25 knots (23.0 to 28.7 mph / 37.0 to 46.3 km/h). Minimum sea level pressure was estimated to be near 996 millibars. 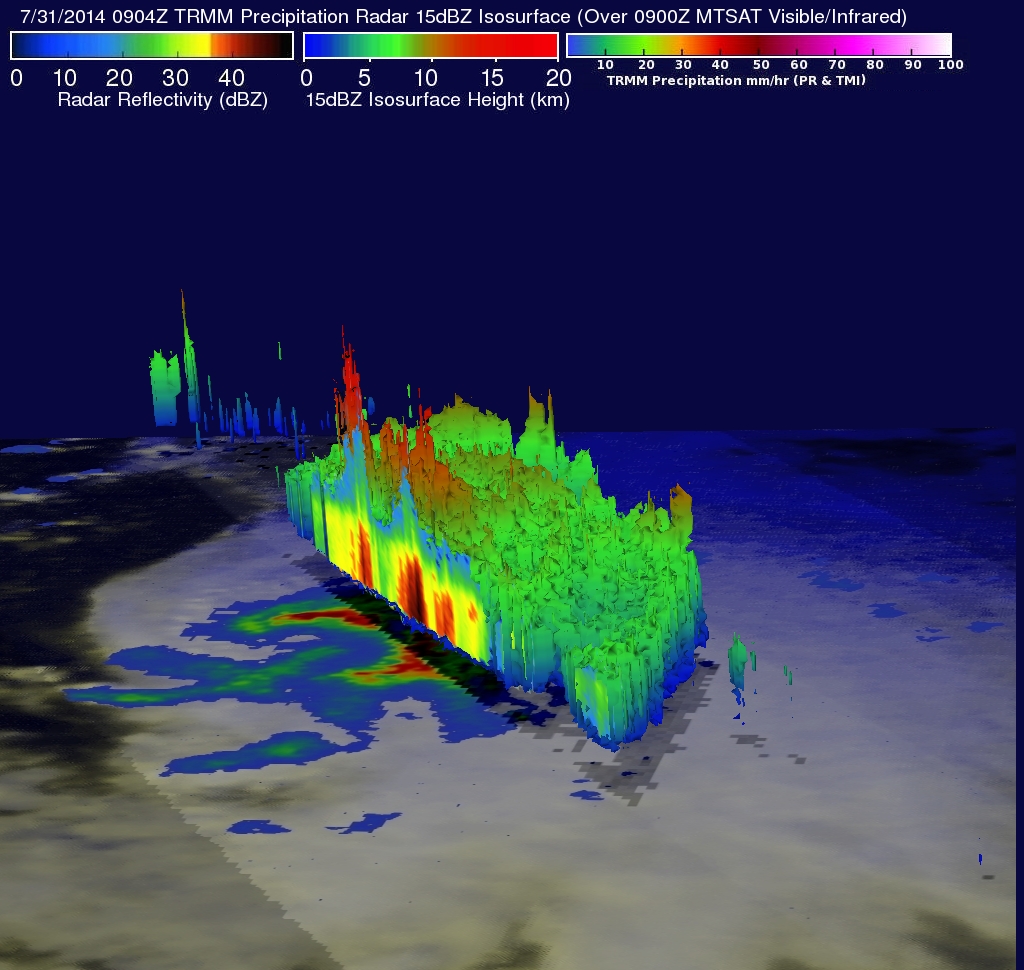 On July 31, NASA's TRMM Satellite showed rain was falling at a rate of over 85.6 mm (about 3.4 inches) per hour in bands wrapping around Halong's southeastern side. Credit: NASA/SSAI, Hal Pierce

NASA's Tropical Rainfall Measuring Mission or TRMM Satellite passed over Guam as heavy rain fell over the island while Tropical Storm Halong's center passed just to the north of the island, at 09:04 UTC on July 31.

TRMM's Precipitation Radar revealed that rain was falling at a rate of over 85.6 mm (about 3.4 inches) per hour in bands wrapping around Halong's southeastern side.

A simulated 3-D view of Halong (from the northwest) was produced at NASA Goddard using radar reflectivity data from TRMM's Precipitation Radar instrument. The image showed a slice near the southern edge of the tropical storm's center found thunderstorms reaching heights of over 16.7 km (about 10.4 miles). The release of energy within these intense thunderstorm towers often portends a tropical cyclone's intensification.

On August 1 at 13:30 UTC the Moderate Resolution Imaging Spectroradiometer or MODIS instrument aboard NASA's Terra satellite captured an infrared picture of the intensifying system. The infrared data showed the coldest, strongest thunderstorm cloud-top temperatures east of the center of circulation. Cloud tops were as cold as -80F/-62C. Cloud top temperatures that cold indicate thunderstorm cloud tops are near the top of the troposphere, and have the potential to drop very heavy rainfall. 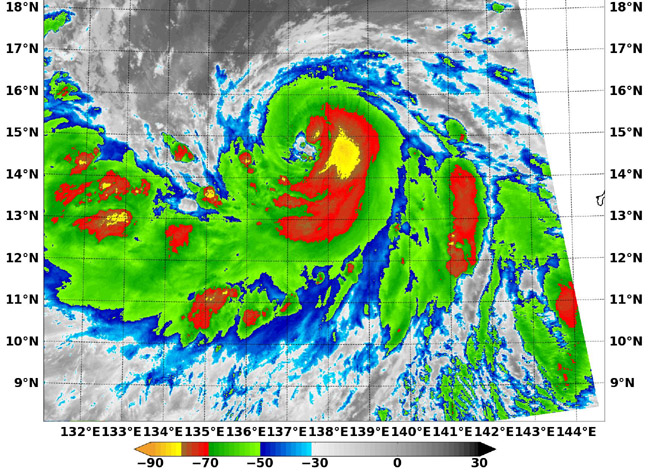