Natural-gas production from shale rock has increased by more than 700 percent since 2007 in the United States alone. Yet scientists still do not fully understand the industry's effects on nature and wildlife, according to a report in the journal Frontiers in Ecology and the Environment.

As gas extraction continues to vastly outpace scientific examination, a team of eight conservation biologists from various organizations and institutions, including Princeton University, concluded that determining the environmental impact of gas-drilling sites — such as chemical contamination from spills, well-casing failures and other accidents — must be a top research priority.

With shale-gas production projected to surge during the next 30 years, the authors call on scientists, industry representatives and policymakers to cooperate on determining — and minimizing — the damage inflicted on the natural world by gas operations such as hydraulic fracturing, or "fracking." A major environmental concern, hydraulic fracturing releases natural gas from shale by breaking the rock up with a high-pressure blend of water, sand and other chemicals, which can include carcinogens and radioactive substances.

"We can't let shale development outpace our understanding of its environmental impacts," said co-author Morgan Tingley, a postdoctoral research associate in the Program in Science, Technology and Environmental Policy in Princeton's Woodrow Wilson School of Public and International Affairs.

"The past has taught us that environmental impacts of large-scale development and resource extraction, whether coal plants, large dams or biofuel monocultures, are more than the sum of their parts," Tingley said. 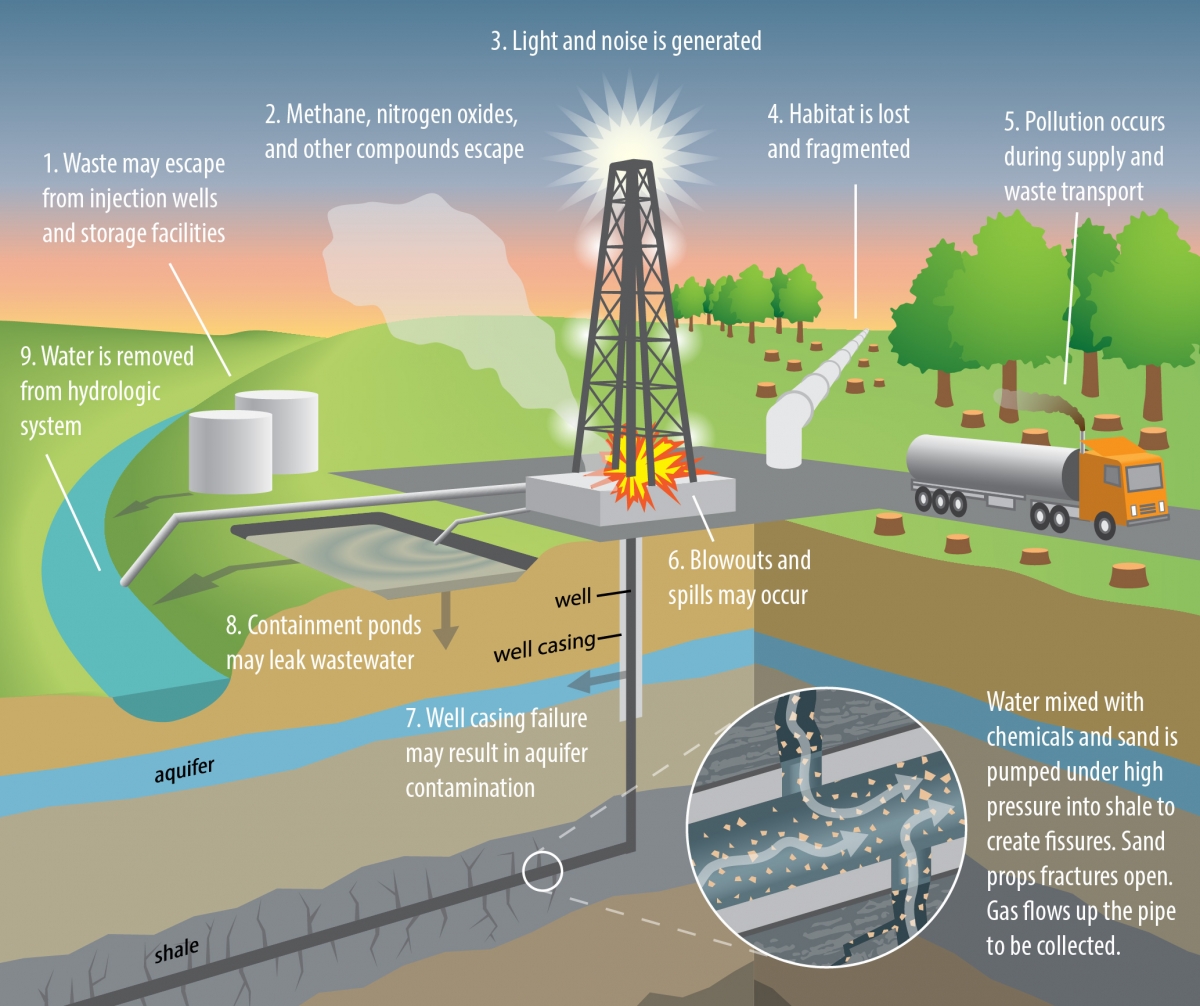 Eight conservation biologists from various organizations and institutions, including Princeton University, found that shale-gas extraction in the United States has vastly outpaced scientists’ understanding of the industry’s environmental impact. Each gas well can act as a source of air, water, noise and light pollution (above) that — individually and collectively — can interfere with wild animal health, habitats and reproduction. Of particular concern is the fluid and wastewater associated with hydraulic fracturing, or “fracking,” a technique that releases natural gas from shale by breaking the rock up with a high-pressure blend of water, sand and other chemicals. (Frontiers in Ecology and the Environment )

The researchers found that there are significant "knowledge gaps" when it comes to direct and quantifiable evidence of how the natural world responds to shale-gas operations. A major impediment to research has been the lack of accessible and reliable information on spills, wastewater disposal and the composition of fracturing fluids. Of the 24 American states with active shale-gas reservoirs, only five — Pennsylvania, Colorado, New Mexico, Wyoming and Texas — maintain public records of spills and accidents, the researchers report.

"The Pennsylvania Department of Environmental Protection's website is one of the best sources of publicly available information on shale-gas spills and accidents in the nation. Even so, gas companies failed to report more than one-third of spills in the last year," said first author Sara Souther, a postdoctoral research associate at the University of Wisconsin-Madison.

"How many more unreported spills occurred, but were not detected during well inspections?" Souther asked. "We need accurate data on the release of fracturing chemicals into the environment before we can understand impacts to plants and animals."

One of the greatest threats to animal and plant life identified in the study is the impact of rapid and widespread shale development, which has disproportionately affected rural and natural areas. A single gas well results in the clearance of 3.7 to 7.6 acres (1.5 to 3.1 hectares) of vegetation, and each well contributes to a collective mass of air, water, noise and light pollution that has or can interfere with wild animal health, habitats and reproduction, the researchers report.

"If you look down on a heavily 'fracked' landscape, you see a web of well pads, access roads and pipelines that create islands out of what was, in some cases, contiguous habitat," Souther said. "What are the combined effects of numerous wells and their supporting infrastructure on wide-ranging or sensitive species, like the pronghorn antelope or the hellbender salamander?"

The chemical makeup of fracturing fluid and wastewater is often unknown. The authors reviewed chemical-disclosure statements for 150 wells in three of the top gas-producing states and found that an average of two out of every three wells were fractured with at least one undisclosed chemical. The exact effect of fracturing fluid on natural water systems as well as drinking water supplies remains unclear even though improper wastewater disposal and pollution-prevention measures are among the top state-recorded violations at drilling sites, the researchers found.

"Some of the wells in the chemical disclosure registry were fractured with fluid containing 20 or more undisclosed chemicals," said senior author Kimberly Terrell, a researcher at the Smithsonian Conservation Biology Institute. "This is an arbitrary and inconsistent standard of chemical disclosure."

Featured image: With shale-gas production projected to surge during the next 30 years, determining and minimizing the industry’s effects on nature and wildlife must become a top priority for scientists, industry and policymakers. Image of Wyoming’s Jonah Field, a major site of shale development. Photo courtesy of Ecoflight.