Over the past ten years in the United States, unconventional gas and oil drilling using hydraulic fracturing, or fracking, has experienced a meteoric increase. Since well drilling requires an influx of water, materials and workers into yotherwise rural and remote areas, the question has been: could air, water and noise pollution negatively impact on the health of nearby residents?

In research from the University of Pennsylvania and Columbia University published this week in PLoS One, my colleagues and I found that hospitalizations for heart conditions, neurologic illness and other maladies were higher among people who live near unconventional gas and oil drilling.

The finding suggests that these people are exposed to stressors, such as toxic substances and noise, that can lead to a higher rates of hospitalizations.

Our analysis showed that hospitalization rates were associated with residents’ proximity to active wells.

In Bradford and Susquehanna Counties, there was a significant increase in drilling activity over the study period while a control county, Wayne, had no drilling activity due to a ban on hydraulic fracturing in the county because of its proximity to the Delaware River watershed.

As reported in PLoS One, cardiology and neurology inpatient prevalence rates (the proportion of a population found to have been hospitalized per 100 residents per year) were significantly higher in areas closer to active wells. 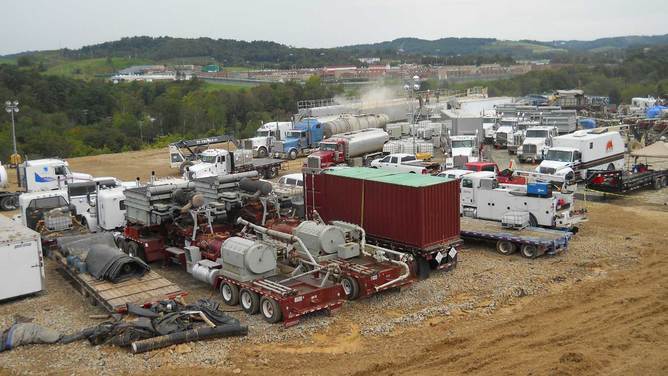 A typical drill pad, such as this one in Pennsylvania, entails regular traffic of heavy trucks to deliver water and other materials. Credit: USGS.

In addition, increased neurologic inpatient prevalence rates were associated with higher well density. Hospitalizations for skin conditions, cancer and urologic problems were also associated with the proximity of dwellings to active wells.

The team found that 18 zip codes had a well density greater than 0.79 wells per square kilometer, and that residents living in these zip codes were predicted to have a 27% increase in cardiology inpatient prevalence rates for each that well density occurred over the five-year interval. These rates were compared to the control county (Wayne) in which residents did not experience such an increase, and there was no active drilling.

These data clearly demonstrate an association of active well density with increasing some but not all causes of hospitalization. The precise reason or reasons for the increase in hospitalizations remains unclear.

Several important toxicants such as noise and air pollution from diesel exhaust from, for example, higher local truck traffic, as well as social stress likely contribute to the increased incidence of hospitalizations. At this time, the specific toxicant or combinations that increase hospitalization rates remain unclear.

Importantly, this is the first comprehensive study to link hospitalization rates and well density and focuses attention on specific medical illnesses that could be linked to hydraulic fracturing. Further studies will examine whether emergency department or outpatient visits are also associated with active well drilling. Personalized monitoring of specific toxicants in future studies may also provide clues as to causation.

While the study cannot prove that hydraulic fracturing actually causes health problems, the hospitalization increases observed over a relatively short time span of observation suggests that health care costs of hydraulic fracturing must be factored into the economic benefits of unconventional gas and oil drilling.

Written by Reynold A Panettieri Jr (The Conversation)