Xcel Energy reported 225 000 customers were without power during the storm. Around 82 000 of its customers across Minnesota and Wisconsin have remained without electricity after the storm. Several hundred workers, from five states, were assisting repairs.

"Unlike Sunday’s bow echo that tore through the Brainerd lakes area, this one did not weaken as it approached the Twin Cities. In fact it strengthened and ultimately became tornadic about 30 minutes before it hit the west metro. They suspect a rare gravity wave like the event of June 16, 2014 may have enhanced this storm.

(​A bow echo is a term describing the characteristic radar return from a mesoscale convective system that is shaped like an archer's bow. These systems can produce severe straight-line winds and occasionally tornadoes, causing major damage.)

A pair of vorticies on leading edge of squall line south of #Minneapolis. Could contain brief #tornado #MNwx pic.twitter.com/3Gu5wtZxqx 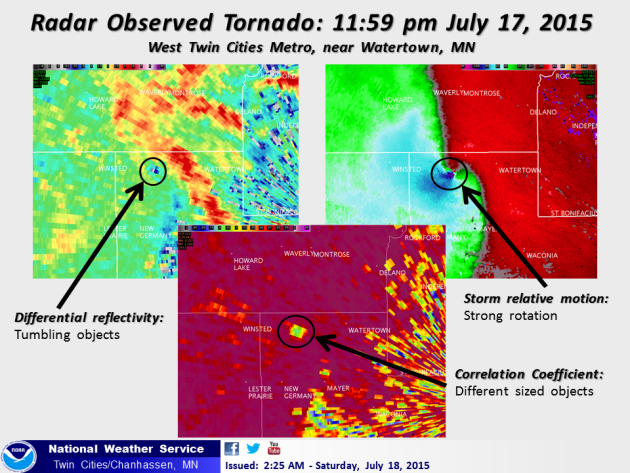 Some infrastructural damage was reported, a few cars were turned upside down, uprooted trees, roads blocked with debris and power cuts were reported in Watertown, Waconia and Hollywood.

“[We found] a ton of stuff that had been blown all over. It was garbage day in some areas, so garbage was spread all over and a trampoline was in the road in Minnetrista,” said Eric Waage, Hennepin County's emergency management director.

No injuries were reported so far.