A severe thunderstorm brought heavy rainfall, flash floods and strong winds to northern Iran on Sunday, July 19, 2015. Resulting flash floods and landslides have caused damage to infrastructure and power cutoff. 20 people were reported dead and at least 12 missing in the provinces of Tehran and Alborz.

Teheran, the capital of Iran was battered by torrential rainfall and strong winds, brought by a sudden summer storm onset on Sunday afternoon. The strongest damage was inflicted upon the northern, northwestern and western areas of the capital.

Heavy winds with speeds reaching up to 80 km/h (49.7 mph) brought down a number of trees, damaged local buildings and caused the power outage across the provinces. The floods caused extensive damage across the affected areas, inundating villages and blocking traffic routes.

A flash flood was reported to pull cars off the mountainous Chalous Road into the Karaj River in the Alborz province. 151 mm (5.9 inches) of rain was measured in the city of Nowshahr in a 24 hour period, on July 19. 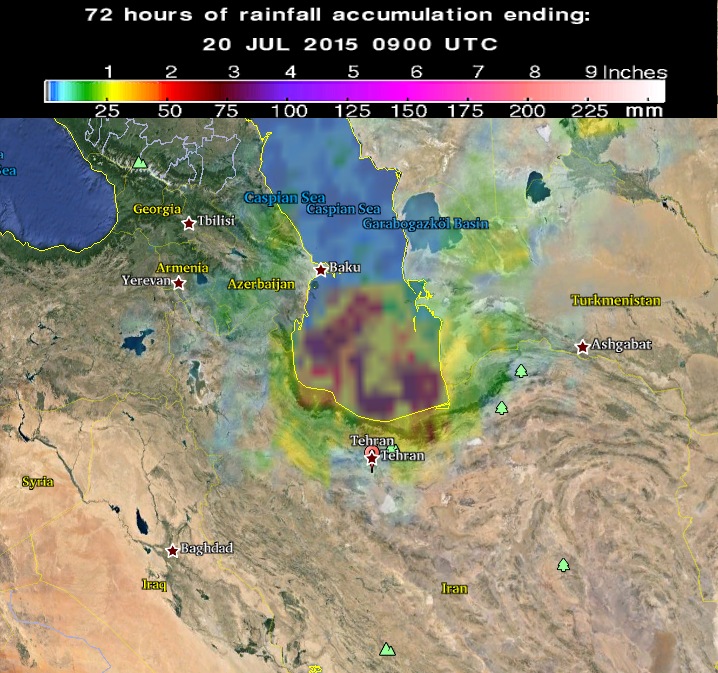 The rescue teams have been dispatched across the affected area, searching the riverbanks, as the officials have warned the number of victims may still rise.

The rainstorm is forecasted to continue to sweep the area of north Iran over the next 24 hours.