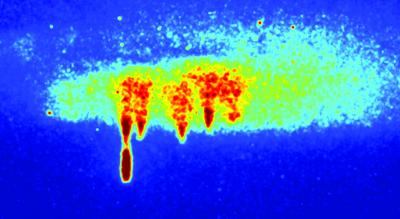 Atmospheric sprites have been known for nearly a century, but their origins were a mystery. Now, a team of researchers has evidence that sprites form at plasma irregularities and may be useful in remote sensing of the lower ionosphere.

"We are trying to understand the origins of this phenomenon," said Victor Pasko, professor of electrical engineering, Penn State. "We would like to know how sprites are initiated and how they develop."

Sprites are an optical phenomenon that occur above thunderstorms in the D region of the ionosphere, the area of the atmosphere just above the dense lower atmosphere, about 37 to 56 miles above the Earth. The ionosphere is important because it facilitates the long distance radio communication and any disturbances in the ionosphere can affect radio transmission.

"In high-speed videos we can see the dynamics of sprite formation and then use that information to model and to reproduce the dynamics," said Jianqi Qin, postdoctoral fellow in electrical engineering, Penn State, who developed a model to study sprites. 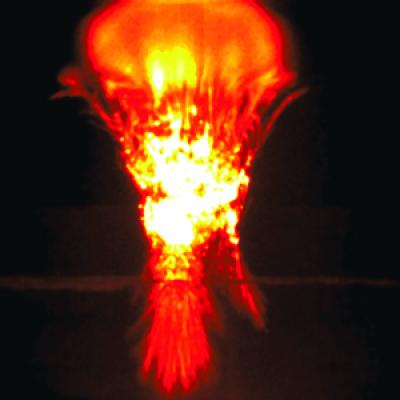 The researchers studied video observations of sprites, developed a model of how sprites evolve and disappear, and tested the model to see if they could recreate sprite-forming conditions. They reported their results on May 7 in Nature Communications.

Sprites resemble reddish orange jellyfish with bluish filamentary tendrils hanging down below. Careful examination of videos of sprites forming showed that their downward hanging filaments form much more rapidly than in the horizontal spread, leading the researchers to suggest that localized plasma irregularities cause the streamers to propagate.

The researchers used a two-dimensional cylindrical symmetric plasma fluid model, a mathematical model of the ionization movements in the sprite, to study sprite dynamics. They then used the model to recreate optical sprite creation. From this recreation, the researchers determined where the sprite streamers originated, and they could estimate the size of the plasma irregularity.

This is a sequence of black and white images of sprite initiation on July 20, 2012. Image credit: H. H. C. Stenbaek-Nielsen

Further analysis suggested some potential causes of these plasma irregularities. The most obvious seems to be the existence in that area of a previous sprite. For the sprites examined, there were no previous sprites in that area that occurred close enough in time, unless there were long-lasting irregularities. However, the researchers are unsure how such long-lasting events could occur.

Another possible source for the irregularities is meteor events. The D region of the ionosphere is in the upper part of the atmosphere where most meteors can exist, because once they enter the denser, lower atmosphere, they burn up due to atmospheric friction.

"This technique can be used for remote sensing in the ionosphere as well," said Pasko. "Using high speed videos and fluid models we may be able to see other things that go on in the ionosphere and better understand the effects of various natural phenomena on very low frequency radio communications."