Earth is currently under the influence of S1 (minor) solar radiation storm created as a result of yesterday's M7.3 solar flare. Our planet is showered with highly energetic solar particles (primarily protons) released from the flare site. Extended warning is now valid until 01:00 UTC on April 20, 2014. Duration of event will influence severity of effects.

Solar radiation storms (also known as Space Radiation Storms, Solar Proton Events or SPE) occur when explosions on the Sun accelerate solar protons toward Earth at very high speeds. When these protons arrive at Earth and enter the atmosphere over the polar regions, much enhanced ionization is produced at altitudes below 100 km. Ionization at these low altitudes is particularly effective in absorbing HF radio signals and can render HF communications impossible throughout the polar regions. 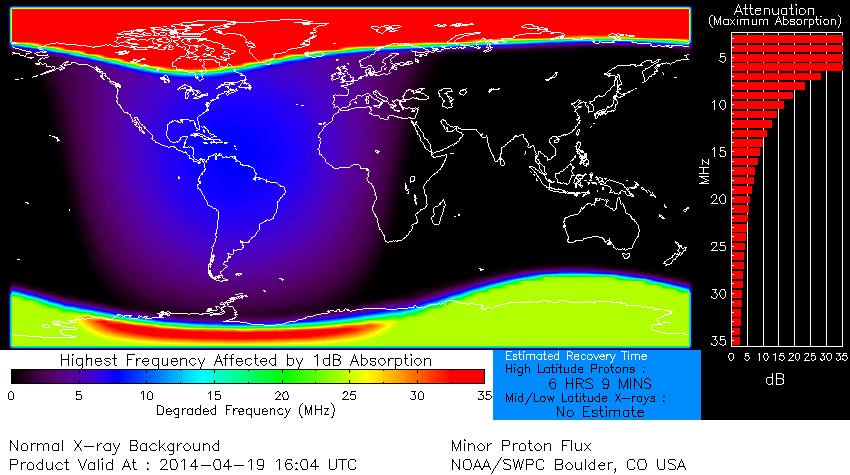 According to SWPC, it was accompanied by a Tenflare (1000 sfu), a Castelli-U signature, as well as Type II (851 km/s) and Type IV radio emissions. An asymmetric halo CME was subsequently observed in SOHO/LASCO C2 coronagraph imagery at 13:25 UTC. Analysis suggested the ejecta was moving at approximately 1000 km/s and is Earth-directed. 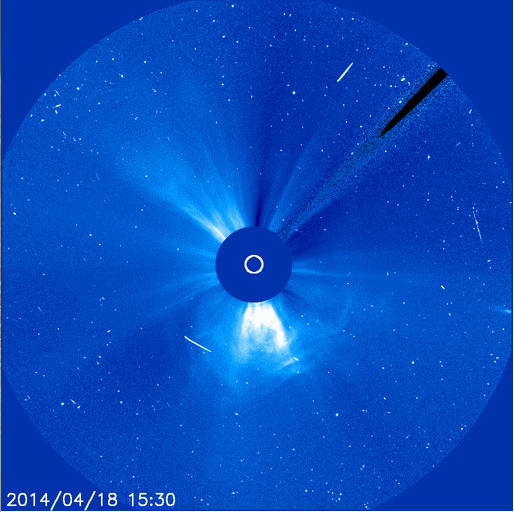 Given the coronal mass ejection associated with this event and another observed on the 17th, the combined effects are expected to drive G1 (Minor) storming on the 20th and 21st. (SWPC)

There are several regions on the disk with the potential for continued activity. Forecasters estimate 60% chance of M-class, and 10 % chance of X-class solar flares in next three days.

According to latest ​joint USAF/NOAA "Solar Geophysical Activity Report and Forecast" issued 22:00 UTC on April 18th, proton event probabilities for today are 99%, 75% for April 20, and 50% for April 21.