Three years of measurements by ESA's "CryoSat" satellite show that the West Antarctic Ice Sheet is estimated to be losing over 150 cubic kilometers of ice each year which is considerably more than when last surveyed.

CryoSat observes Earth with a radar altimeter that can measure the surface height variation of ice in high resolution, allowing scientists to calculate its volume accurately.

Professor Andrew Shepherd from the University of Leeds, who led the West Antarctica study, said that part of the increase of ice loss could be due to faster thinning, but that part of it may also be down to CryoSat’s capacity to observe previously unseen terrain. 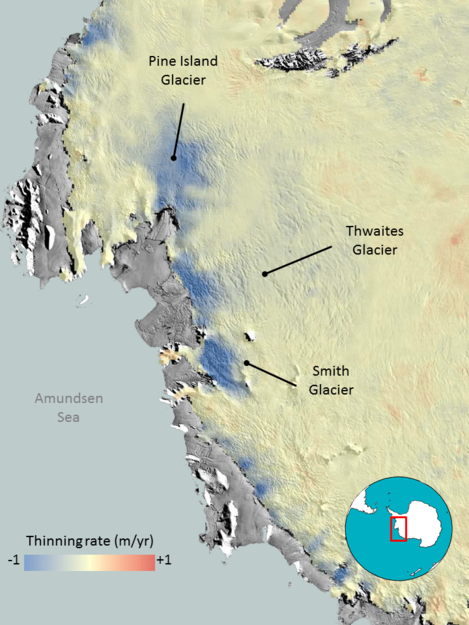 Three years of measurements from CryoSat show that the West Antarctic Ice Sheet is estimated to be losing over 150 cubic kilometres of ice each year. Image credit: CPOM/ESA​

Observations also showed that imbalance in West Antarctica continues to be dominated by ice losses from glaciers flowing into the Amundsen Sea.

“We find that ice thinning continues to be most pronounced along fast-flowing ice streams of this sector and their tributaries, with thinning rates of between 4–8 m per year near to the grounding lines – where the ice streams lift up off the land and begin to float out over the ocean – of the Pine Island, Thwaites and Smith Glaciers,” said Dr Malcolm McMillan from the University of Leeds, UK.

"Melting of ice sheets that blanket Antarctica and Greenland is a major contributor to global sea-level rise."

An international team of polar scientists had recently concluded that West Antarctica caused global sea levels to rise by 0.28 mm each year between 2005 and 2010, based on observations from 10 different satellite missions. But the latest research from CryoSat suggests that the sea level contribution from this area is now 15% higher.

The findings from a team of UK researchers at the Natural Environment Research Council’s Centre for Polar Observation and Modelling were presented this week at the American Geophysical Union’s autumn meeting in San Francisco, California. (ESA) 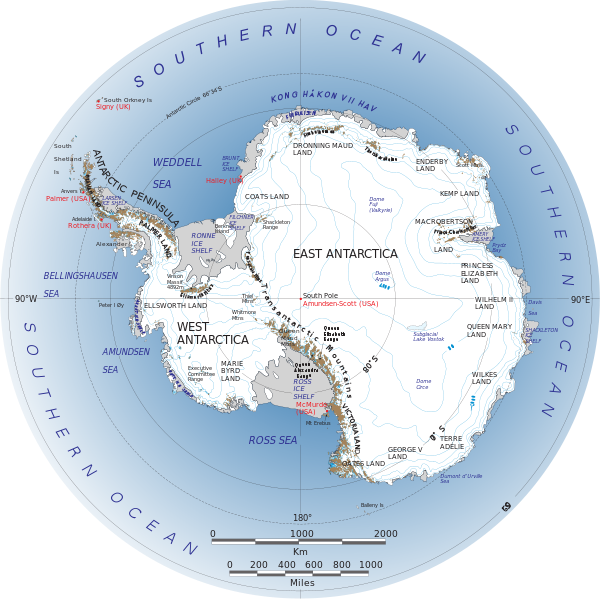 A study published on September 29, 2013, explains how scientists from Washington University in St. Louis discovered that a new volcano is smoldering under a 1.2 – 2 km thick ice. They say its heat may increase the rate of ice loss from one of the continent’s major ice streams.

Although numerous volcanoes exist in Marie Byrd Land, a highland region of West Antarctica where this new volcano is located, until now there has been no evidence for recent magmatic activity.

Seismic network showed that in 2010 and 2011, two swarms of seismic activity occurred at 25–40 km depth beneath subglacial topographic and magnetic highs, located 55 km south of the youngest subaerial volcano in the Executive Committee Range.

The swarms were interpreted as deep long-period earthquakes based on their unusual frequency content. Such earthquakes occur beneath active volcanoes, they are caused by deep magmatic activity and, in some cases, precede eruptions.

In another study, published on April 25, 2012, NASA scientists concluded that 20 of the 54 ice shelves studied are being melted by warm ocean currents. Most of these are in West Antarctica, where inland glaciers flowing down to the coast and feeding into these thinning ice shelves have accelerated, draining more ice into the sea and contributing to sea-level rise. They said that ocean-driven thinning is responsible for the most widespread and rapid ice losses in West Antarctica, and for the majority of Antarctic ice sheet loss during the study period."

"We can lose an awful lot of ice to the sea without ever having summers warm enough to make the snow on top of the glaciers melt," said the study's lead author Hamish Pritchard of the British Antarctic Survey in Cambridge, United Kingdom. "The oceans can do all the work from below."

Meanwhile, NASA/USGS "Landsat-8" pinpointed the coldest place on Earth to a high ridge in Antarctica on the East Antarctic Plateau where temperatures in several hollows can dip below minus 133.6 degrees Fahrenheit (minus 92 degrees Celsius) on a clear winter night.

NASA article about the study explained how the discovery was made. Researchers analyzed 32 years' worth of data from several satellite instruments. They found temperatures plummeted to record lows dozens of times in clusters of pockets near a high ridge between Dome Argus and Dome Fuji, two summits on the ice sheet known as the East Antarctic Plateau. The new record of minus 136 F (minus 93.2 C) was set August 10, 2010.

That is several degrees colder than the previous low of minus 128.6 F (minus 89.2 C), set in 1983 at the Russian Vostok Research Station in East Antarctica. The coldest permanently inhabited place on Earth is northeastern Siberia, where temperatures in the towns of Verkhoyansk and Oimekon dropped to a bone-chilling 90 degrees below zero Fahrenheit (minus 67.8 C) in 1892 and 1933, respectively.

Russians dispute the record, but still it is East Antarctic

The head of the Russian Antarctic Expedition's logistics center, Vyacheslav Martyanov,​ told RIA Novosti, that it is incorrect to declare a temperature record based on satellite data, explaining that AVHRR and MODIS are measuring the so-called ‘luminance temperature’, which does not fully correlate with true meteorological conditions and must be confirmed by observations on the ground.

"The Valkyrie Dome, also known as Dome Fuji or simply Dome F, is Antarctica’s second-highest elevation and one of the coldest places on Earth on average alone. The temperature there practically never rises above -30°C, even in summertime."

“Air temperature is measured according to standards, at the height of 2 meters above the ground, like they do at meteorological observing stations, therefore recognizing a temperature measured by remote sensing is unrealistic,” he said. (RT)