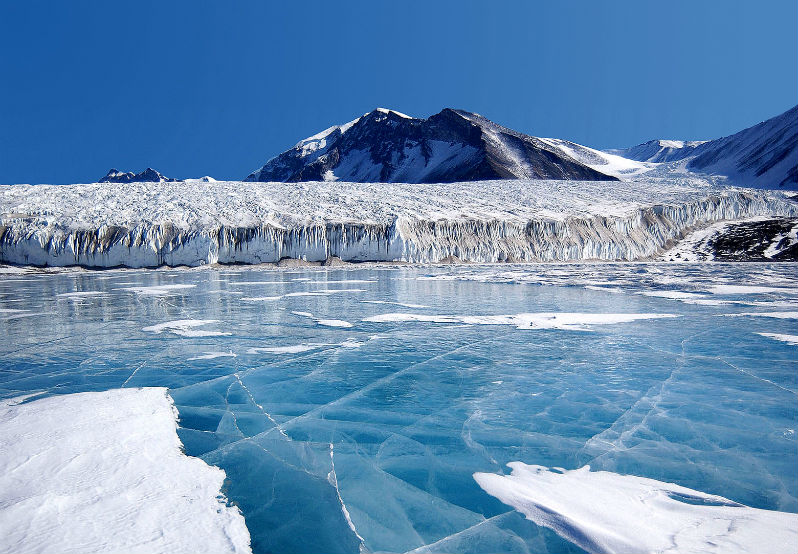 A new study suggests that current conditions in the ocean around Antarctica​ could led to the rapid melting of Antarctic ice and an abrupt 3-4 meter rise in global sea level. Warming in parts of Antarctica is causing land-based ice to melt, adding massive amounts of freshwater to the ocean surface, while at the same time as the surface is cooling, the deeper ocean is warming. Those conditions in the past triggered significant shifts in the stability of the Antarctic ice sheet.

The research published in Nature Communications found that in the past, when ocean temperatures around Antarctica became more layered – with a warm layer of water below a cold surface layer – ice sheets and glaciers melted much faster than when the cool and warm layers mixed more easily. This defined layering of temperatures is exactly what is happening now around the Antarctic.

Researchers at ARC Centre of Excellence for Climate System Science pointed the last time this occurred, 14,000 years ago, the Antarctic alone contributed 3-4 metres to global sea levels in just a few centuries. The accelerating melting of land ice into the sea makes the surface of the ocean around Antarctica colder, less salty and more easily frozen, leading to extensive sea ice in some areas. It is one of the reasons ascribed to the increasing trend in sea ice around Antarctica.

According to UNSW ARC Future Fellow Dr Chris Fogwill, the results of model simulations they used demonstrate that while Antarctic ice sheets are remote, they may play a far bigger role in driving past and importantly future sea level rise than we previously suspected.

The researchers used sophisticated ice sheet and climate models and verified their results with independent geological observations from the oceans off Antarctica. The geological data clearly showed that when the waters around the Antarctic became more stratified, the ice sheets melted much more quickly.

"The big question is whether the ice sheet will react to these changing ocean conditions as rapidly as it did 14,000 years ago? With 10 per cent of the world's population, or 700 million people, living less than 10 metres above present sea level, an additional three metres of sea level rise from the Antarctic alone will have a profound impact on us all", Lead author Dr Nick Golledge, a senior research fellow at Victoria's Antarctic Research Centre

Unlike the Arctic – an ocean basin surrounded by land, the Antarctic is a large continent surrounded by ocean. Because of this geography, sea ice has more room to expand in the winter. But the ice also stretches closer to warmer, lower latitudes, leading to more melting in summer.

Rapid melting of glaciers already contribute significantly to sea level rise, releasing almost as much ice into the ocean annually as the entire Greenland Ice Sheet. They contain enough ice to raise global sea level by 1.2 meters (4 feet) and are melting faster than most scientists had expected. Three major lines of evidence point to the glaciers' eventual collapse: the changes in their flow speeds, how much of each glacier floats on seawater, and the slope of the terrain they are flowing over and its depth below sea level.

Two studies published in March 2014 conclude that a section of the West Antarctic ice sheet has reached a point of inevitable collapse, an event that would eventually raise sea levels more than a meter (three-plus feet).

The first study, led by Eric Rignot of the Jet Propulsion Laboratory, used NASA satellite and airborne observations to measure how glaciers have been retreating in the region.

The other study, led by Ian Joughin of the University of Washington, used a computer model to compare observations of recent melting with projected melt scenarios to see which matches reality best so far. Both studies conclude that the Amundsen Sea segment of the ice sheet has begun an irreversible decline that will result in its loss, possibly as soon as the next few hundred years. 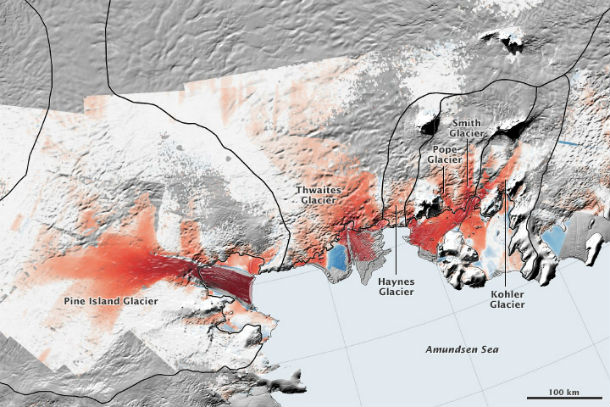 In a study published in March 2014 in Geophysical Research Letters, researchers found that glaciers near Amundsen sea have been speeding up, as shown in the map above. Changes in ice flow between 1996 and 2008 are shown in red (accelerating) and blue (slowing). The changes were calculated from a variety of satellite observations, including visible light and radar observations that measure how fast the surface is moving, and satellite altimeter measurements of the height of the ice (for estimating thickness). Most of the glaciers have been flowing faster, and the changes extend far inland. Credit: Earth Observatory

The Amundsen Sea region contains several fast-moving glaciers, including Pine Island, Thwaites, Haynes, Pope, Smith, and Kohler. Many Antarctic glaciers have offshore ice shelves that hold them in place like a dam. But there is very little fixed, offshore ice in the Amundsen Sea, so the glaciers flow freely. These rivers of ice drain one third of the West Antarctic ice sheet.​

"On September 17, Arctic sea ice reached its likely minimum extent for 2014. This is now the sixth lowest extent in the satellite record and reinforces the long-term downward trend in Arctic ice extent. Sea ice extent will now begin its seasonal increase through autumn and winter. Meanwhile, sea ice in the Antarctic has surpassed the previous record maximum extent set in 2013 and is now more than 20 million square kilometers (7.72 million square miles) for the first time in the past thirty-five years. It is too soon to determine if Antarctic sea ice has reached its annual maximum."

Please note that this is a preliminary announcement. Changing winds in the Arctic could still push ice floes together, reducing Arctic ice extent below the current yearly minimum. NSIDC scientists will release a full analysis of the Arctic melt season, and discuss the Antarctic winter sea ice growth, in early October.