According to a new study led by researchers at the University of California (US), Sanza Cruz have found that the amount of heat flowing toward the base of the West Antarctic Ice Sheet from geothermal sources deep within the Earth is surprisingly high.

The results of the study, published on July 10 in the online journal Science Advances, provide important data for researchers trying to predict the fate of the ice sheet, which has experienced rapid melting over the past decade.

Lead author Andrew Fisher, a professor of Earth and planetary sciences at UC Santa Cruz, emphasized that the geothermal heating reported in this study does not explain the alarming loss of ice from West Antarctica that has been documented by other researchers.

"The ice sheet developed and evolved with the geothermal heat flux coming up from below – it's part of the system. But this could help explain why the ice sheet is so unstable," he said.

The study draws upon data collected by a large Antarctic drilling project, funded by an award from the National Science Foundation's Division of Polar Programs, called WISSARD (Whillans Ice Stream Subglacial Access Research Drilling), for which UC Santa Cruz is one of three lead institutions, the others being Montana State University and Northern Illinois University. The Division manages the U.S. Antarctic Program, through which it coordinates all U.S. scientific research on the southernmost continent.

Scott Borg, who heads the Division's Antarctic sciences section, noted that the multidiscplinary WISSARD project has produced a number of significant research results in recent years that are helping to advance scientific understanding in disparate fields, from biology to the geosciences.

"The WISSARD findings, including this latest discovery about geothermal heat," he said, "are helping us to assemble a deeper understanding of the nature of extreme ecosystems in Antarctica, and, possibly, similar ecosystems elsewhere in the solar system, as well helping us to understand some of the many dynamic processes that govern the behavior of the massive Antarctic ice sheets."

Maps showing the location of West Antarctica and SLW, where the data and samples described in this study were collected. (A) Antarctic map showing geographic regions and location of field area below the confluence of the Whillans and Mercer Ice Streams. Grounded ice is shown in gray, and ice shelves are shown in tan. (B) Overview of the Whillans Ice Plain showing the surface morphology and position of the WAIS grounding line (39), the lateral limits of ice streams (yellow lines) (30), and the outlines of subglacial lakes (16, 40), identified as follows: SLC, Subglacial Lake Conway; SLM, Subglacial Lake Mercer; SLW, Subglacial Lake Whillans; SLE, Subglacial Lake Engelhardt; L7, Lake 7; L8, Lake 8; L10, Lake 10; and L12, Lake 12. Image credit: Andrew Fisher et al.

The research team used a special thermal probe, designed and built at UC Santa Cruz, to measure temperatures in sediments below Subglacial Lake Whillans, which lies beneath half a mile of ice. After boring through the ice sheet with a special hot-water drill, researchers lowered the probe through the borehole until it buried itself in the sediments below the subglacial lake. The probe measured temperatures at different depths in the sediments, revealing a rate of change in temperature with depth about five times higher than that typically found on continents. The results indicate a relatively rapid flow of heat towards the bottom of the ice sheet.

High heat flow below the West Antarctic Ice Sheet may also help explain the presence of lakes beneath it and why parts of the ice sheet flow rapidly as ice streams. Water at the base of the ice streams is thought to provide the lubrication that speeds their motion, carrying large volumes of ice out onto the floating ice shelves at the edges of the ice sheet. Fisher noted that the geothermal measurement was from only one location, and heat flux is likely to vary from place to place beneath the ice sheet. 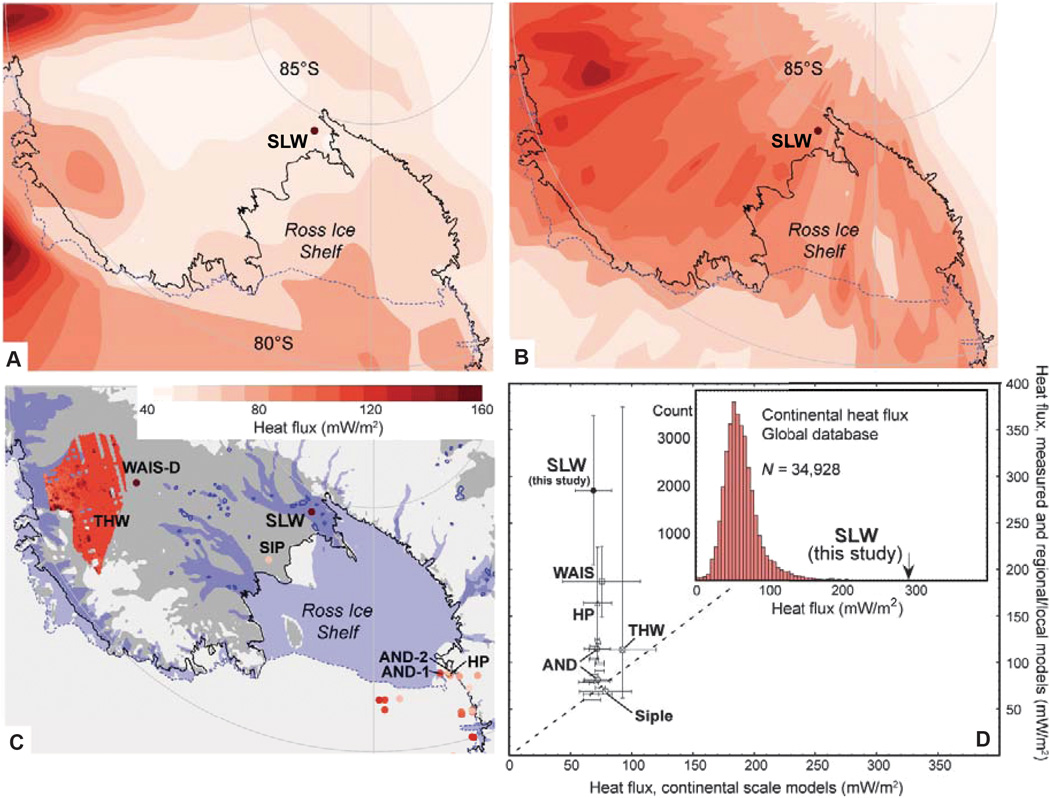 "This is the first geothermal heat flux measurement made below the West Antarctic Ice Sheet, so we don't know how localized these warm geothermal conditions might be. This is a region where there is volcanic activity, so this measurement may be due to a local heat source in the crust," Fisher said.

This geothermal heating contributes to melting of basal ice, which supplies water to a network of subglacial lakes and wetlands that scientists have discovered underlies a large region of the ice sheet. In a separate study published last year in Nature, the WISSARD microbiology team reported an abundant and diverse microbial ecosystem in the same lake. Warm geothermal conditions may help to make subglacial habitats more supportive of microbial life, and could also drive fluid flow that delivers heat, carbon, and nutrients to these communities.

According to co-author Slawek Tulaczyk, a professor of Earth and planetary sciences at UC Santa Cruz and one of the WISSARD project leaders, the geothermal heat flux is an important value for the computer models scientists are using to understand why and how quickly the West Antarctic Ice Sheet is shrinking.

"It is important that we get this number right if we are going to make accurate predictions of how the West Antarctic Ice Sheet will behave in the future, how much it is melting, how quickly ice streams flow, and what the impact might be on sea level rise," Tulaczyk said. "I waited for many years to see a directly measured value of geothermal flux from beneath this ice sheet."

Antarctica's huge ice sheets are fed by snow falling in the interior of the continent. The ice gradually flows out toward the edges. The West Antarctic Ice Sheet is considered less stable than the larger East Antarctic ice sheet because much of it rests on land that is below sea level, and the ice shelves at its outer edges are floating on the sea. Recent studies by other research teams have found that the ice shelves are melting due to warm ocean currents now circulating under the ice, and the rate at which the ice shelves are shrinking is accelerating. These findings have heightened concerns about the overall stability of the West Antarctic Ice Sheet.

The geothermal heat flux measured in the new study was about 285 milliwatts per square meter, which is like the heat from one small LED Christmas-tree light per square meter, Fisher said. The researchers also measured the upward heat flux through the ice sheet (about 105 milliwatts per square meter) using an instrument developed by coauthor Scott Tyler at the University of Nevada, Reno. That instrument was left behind in the WISSARD borehole as it refroze, and the measurements, based on laser light scattering in a fiber-optic cable, were taken a year later. Combining the measurements both below and within the ice enabled calculation of the rate at which melt water is produced at the base of the ice sheet at the drill site, yielding a rate of about half an inch per year.

In addition to Fisher, Tulaczyk and Tyler, the coauthors of the paper include Ken Mankoff, who earned his doctorate at UC Santa Cruz and is now a research associate at Pennsylvania State University, and current UC Santa Cruz graduate student Neil Foley.