Thousands of previously uncharted mountains rising from the seafloor and new clues about the formation of the continents have emerged through the new map, which is twice as accurate as the previous version produced nearly 20 years ago.

The map was developed via a scientific model that captures gravity measurements of the ocean seafloor. It extracts data from the ESA's CryoSat-2 satellite, which primarily captures polar ice data but also operates continuously over the oceans, and French – US Jason-1, NASA’s satellite that was redirected to map the gravity field during the last year of its 12-year mission.

By these measurements scientists created global marine gravity models and, from them, maps of the seafloor.

Although invisible to the eye, the sea surface has ridges and valleys that echo the topography of the ocean floor, but on a greatly reduced scale. The effect of the slight increase in gravity caused by the mass of rock in an undersea mountain is to attract a mound of water several meters high over the seamount. Deep ocean trenches have the reverse effect. These features can only be detected by using radar altimetry from space.

According to David Sandwell, lead scientist of the new paper and a geophysics professor in the Cecil H. and Ida M. Green Institute of Geophysics and Planetary Physics (IGPP) at Scripps, "The kinds of things you can see very clearly now are abyssal hills, which are the most common land form on the planet.” The authors of the study say the map also provides a new window into the tectonics of the deep oceans.

Some of the previously unseen features in the map include newly exposed continental connections across South America and Africa, and new evidence for seafloor spreading ridges at the Gulf of Mexico that were active 150 million years ago and are now buried by mile-thick layers of sediment.

One of the most important uses of this new marine gravity field will be to improve the estimates of seafloor depth in the 80 percent of the oceans that remains uncharted or is buried beneath thick sediment.

The new map will also provide the foundation for the upcoming new version of Google’s ocean maps to fill large voids between shipboard depth profiles.

ESA’s Richard Francis, co-author and project manager for the development of CryoSat and honorary professor in the Department of Earth Sciences at University College London said that although CryoSat’s primary mission is in the cryosphere, it was known as soon as selected its orbit was selected that it would be invaluable for marine geodesy. 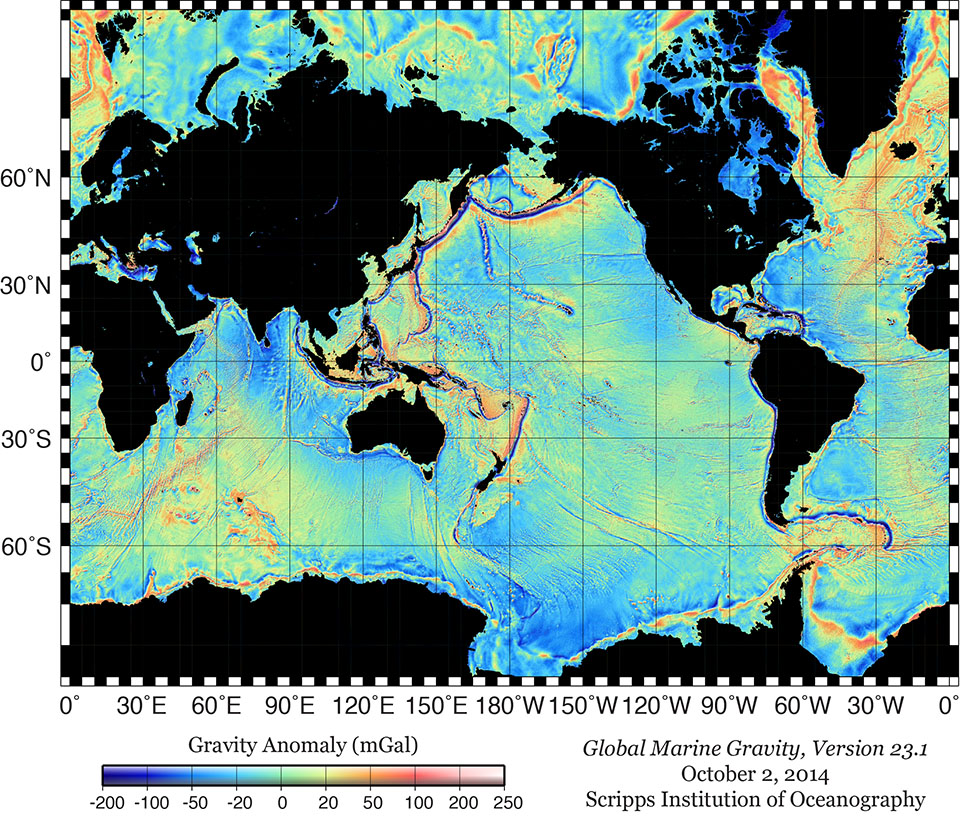 Get the Marine Gravity Map: