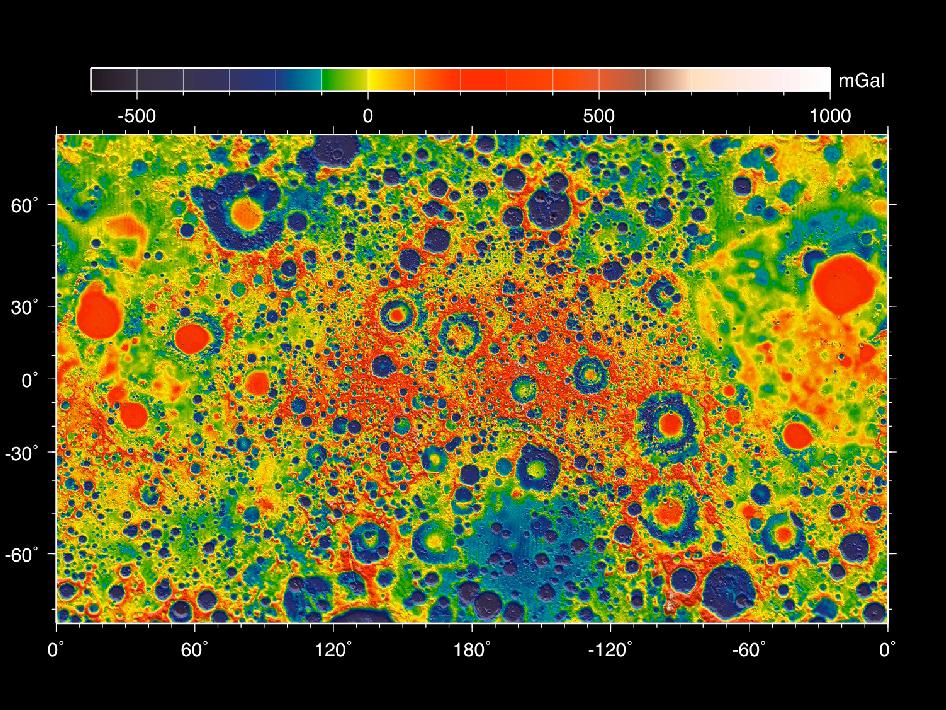 Gravity field map of the moon generated by GRAIL probes boosts Giant impact hypothesis, which states that the Moon was formed out of the debris left over from a collision between the Earth and a body the size of Mars, about 4.5 billion years ago. This new map is also the highest resolution gravity map of any celestial body ever generated. GRAIL (Gravity Recovery and Interior Laboratory) mission’s two spacecrafts – Ebb and Flow, are orbiting moon at an altitude of 50 kilometers to study lunar gravity and collect data for understanding formation and evolution of other rocky planets in our solar system.

New features like tectonic structures, volcanic landforms, basin rings, crater central peaks and many simple, bowl-shaped craters; which were never before seen in such detail, were found in the gravity field map. Data also show the moon’s gravity field is unlike that of any terrestrial planet in our solar system. GRAIL Principal Investigator Maria Zuber of the Massachusetts Institute of Technology in Cambridge said,

“What this map tells us is that more than any other celestial body we know of, the moon wears its gravity field on its sleeve. When we see a notable change in the gravity field, we can sync up this change with surface topography features such as craters, rilles or mountains.”

This movie shows the variations in the lunar gravity field as measured by NASA’s Gravity Recovery and Interior Laboratory (GRAIL) during the primary mapping mission from March to May 2012. Very precise microwave measurements between two spacecraft, named Ebb and Flow, were used to map gravity with high precision and high spatial resolution.

Zuber adds that moon’s gravity field preserves the record of impact bombardment that characterized all terrestrial planetary bodies and reveals evidence for fracturing of the interior extending to the deep crust and possibly the mantle. This impact record is preserved, and now precisely measured, on the moon. The probes revealed the bulk density of the moon’s highland crust is substantially lower than generally assumed. This low-bulk crustal density agrees well with data obtained during the final Apollo lunar missions in the early 1970s, indicating that local samples returned by astronauts are indicative of global processes.  Mark Wieczorek, GRAIL co-investigator at the Institut de Physique du Globe de Paris said,

“With our new crustal bulk density determination, we find that the average thickness of the moon’s crust is between 21 and 27 miles (34 and 43 kilometers), which is about 6 to 12 miles (10 to 20 kilometers) thinner than previously thought. With this crustal thickness, the bulk composition of the moon is similar to that of Earth. This supports models where the moon is derived from Earth materials that were ejected during a giant impact event early in solar system history.” 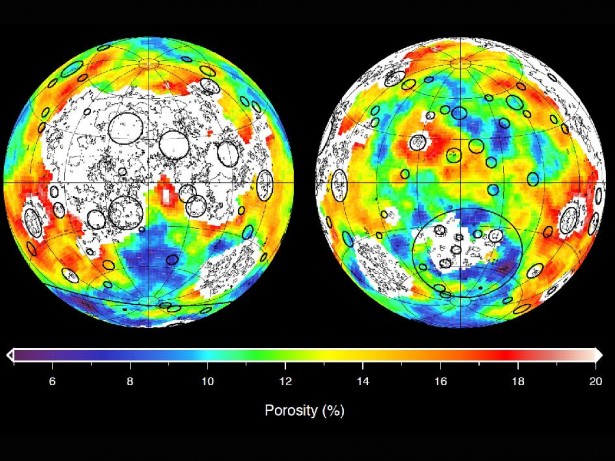 CREATION OF THE GRAVITY FIELD MAP

NASA says,  as spacecrafts were orbiting the moon in formation, radio signals were transmitted to define the precise distance between them. As they fly over areas of greater and lesser gravity caused by visible features, such as mountains and craters, and masses hidden beneath the lunar surface, the distance between the two spacecraft will change slightly. According to Jeff Andrews-Hanna, a GRAIL guest scientist with the Colorado School of Mines in Golden,

“We used gradients of the gravity field in order to highlight smaller and narrower structures than could be seen in previous datasets. This data revealed a population of long, linear gravity anomalies, with lengths of hundreds of kilometers, crisscrossing the surface. These linear gravity anomalies indicate the presence of dikes, or long, thin, vertical bodies of solidified magma in the subsurface. The dikes are among the oldest features on the moon, and understanding them will tell us about its early history.”

It is notable that GRAIL probes, launched in September 2011, have already completed their primary mission and are now on an extended mission since August 30; which will end on December 17. After completion of the mission, spacecrafts will be deliberately crashed onto the lunar surface. These are the first scientific results from the prime phase of the mission, and they are published in three papers in the journal Science.

This map shows the gravity field of the moon as measured by NASA’s GRAIL mission. The viewing perspective, known as a Mercator projection, shows the far side of the moon in the center and the nearside (as viewed from Earth) at either side. Units are milliGalileos where 1 Galileo is 1 centimeter per second squared. Reds correspond to mass excesses which create areas of higher local gravity, and blues correspond to mass deficits which create areas of lower local gravity. Image credit: NASA/ARC/MIT