he second total lunar lunar eclipse of 2014 and 2015 lunar-eclipse tetrad will occur on Wednesday, October 8, 2014, and will be visible from the Pacific Ocean and regions immediately bordering it. As the Moon passes completely through the Earth's dark shadow, or umbra, it will gradually get darker and then take on a rusty or blood red color.

Wednesday's total lunar eclipse observers might also be able to see an extremely rare cosmic sight – selenelion – an effect when the total eclipse of the moon and the rising sun can be seen simultaneously, something celestial geometry says cannot happen.

This eclipse will be difficult to view for most of the planet as it mainly takes place over the Pacific Ocean. As such, the eclipse will only be visible in its entirety from parts of eastern Australia, New Zealand, eastern Asia, most of Japan, Hawaiian Islands, and the western part of North America. Slooh will have strategic sites in these locations allowing the world to view the eclipse live on Slooh.com. In fact, there will be several live broadcasts covering Wednesday's event. They are listed at the end of the article.

The eclipse occurs at the Moon's descending node in southern Pisces, two days after perigee (October 06 at 09:41 UTC). This means that the Moon will appear 5.3% larger than it did during the April 15, 2014, eclipse, according to Eclipse/NASA.

This time the orbital path of the Moon takes it through the northern half of Earth's umbral shadow. The total phase lasts 59 minutes primarily because the diameter of the umbral shadow is larger (1.49° verses 1.39°).

The times of the major eclipse phases are listed below:

At the instant of greatest eclipse (10:54:36 UTC) the Moon lies near the zenith from a location in the Pacific Ocean about 2000 km southwest of Hawaii.

As a result, the southern half of the Moon will appear much darker than the northern half because it lies deeper in the umbra. The Moon samples a large range of umbral depths during totality so its appearance will change considerably with time. The exact brightness distribution in the umbra is difficult to predict, so observers are encouraged to estimate the Danjon value at different times during totality (see Danjon Scale of Lunar Eclipse Brightness). It may also be necessary to assign different Danjon values to different portions of the Moon (e.g., north vs. south).

The entire October 08 eclipse is visible from the Pacific Ocean and regions immediately bordering it. The northwestern 1/3 of North America also witnesses all stages. Farther east, various phases occur after moonset. For instance, the Moon sets during totality from eastern Canada and the USA. Observers in South America also experience moonset during the early stages of the eclipse. All phases are visible from New Zealand and eastern 1/4 of Australia – the Moon rises during the early partial phases from Australia's west coast. Most of Japan and easternmost Asia catch the entire eclipse as well. Farther west in Asia, various stages of the eclipse occur before moonrise. None of the eclipse is visible from Europe, Africa, and the Middle East. (Eclipse/NASA) 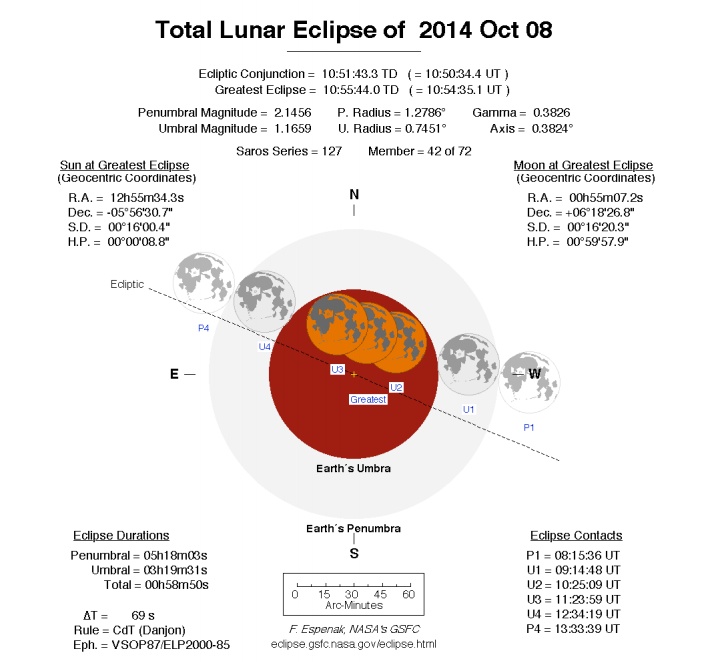 The lunar path through Earth's shadows as well as a map illustrating worldwide visibility of the event. As shown in Figure 3 (Eclipse/NASA).

An extremely rare cosmic sight will accompany the total lunar eclipse on October 8th. For a short window of roughly 2 to 9 minutes observers will have a chance to see both total eclipse of the moon and the rising sun, simultaneously.

"And indeed, during a lunar eclipse, the sun and moon are exactly 180 degrees apart in the sky. In a perfect alignment like this (called a "syzygy"), such an observation would seem impossible.

As a consequence of this atmospheric trick, for many localities east of the Mississippi River, watchers will have a chance to observe this unusual sight firsthand. Weather permitting, you could have a short window of roughly 2 to 9 minutes (depending on your location) with the possibility of simultaneously seeing the sun rising in the east while the eclipsed full moon is setting in the west."

Stargazers worldwide are invited to watch the spectacular total lunar eclipse, sometimes known as the “Blood Moon,” unfold live on Slooh. The free, real-time broadcast will begin on October 8th starting at 02:00 AM PDT / 05:00 AM EDT / 09:00 UTC with live feeds from multiple locations located in Australia and North America.

All sky cam view of a rare #selenelion. Sun is on the left & on the right is a barely visible #moon #LunarEclipse pic.twitter.com/3OSFWV2REm