During a project to reconstruct Antarctica’s climate history, scientists from Washington University in St. Louis discovered that a new volcano is smoldering under a 1.2 – 2 km thick ice. They say its heat may increase the rate of ice loss from one of the continent’s major ice streams.

Although numerous volcanoes exist in Marie Byrd Land, a highland region of West Antarctica where this new volcano is located, until now there has been no evidence for recent magmatic activity.

A recently deployed seismic network showed that in 2010 and 2011, two swarms of seismic activity occurred at 25–40 km depth beneath subglacial topographic and magnetic highs, located 55 km south of the youngest subaerial volcano in the Executive Committee Range.

The swarms were interpreted as deep long-period earthquakes based on their unusual frequency content. Such earthquakes occur beneath active volcanoes, they are caused by deep magmatic activity and, in some cases, precede eruptions.

Scientists which made the discovery also used radar profiles to identify a prominent ash layer in the ice overlying the seismic swarm. Located at 1 400 m depth, the ash layer is about 8 000 years old and was probably sourced from the nearby Mount Waesche volcano.

Together, these observations provide strong evidence for ongoing magmatic activity and demonstrate that volcanism continues to migrate southwards along the Executive Committee Range. Eruptions at this site are unlikely to penetrate the 1.2 to 2-km-thick overlying ice, but would generate large volumes of melt water that could significantly affect ice stream flow.

“Most mountains in Antarctica are not volcanic,” Douglas A. Wiens, a professor of earth and planetary sciences in Arts & Sciences at Washington University in St. Louis and one of the project’s principal investigators, said, “but most in this area are. Is it because East and West Antarctica are slowly rifting apart? We don’t know exactly. But we think there is probably a hot spot in the mantle here producing magma far beneath the surface.”

The scientists calculated that an enormous eruption, one that would release 1 000 times more energy than the typical eruption, would be necessary to breach the ice above the volcano.

On the other hand, a subglacial eruption and the accompanying heat flow will melt a lot of ice. “The volcano will create millions of gallons of water beneath the ice — many lakes full,” Wiens said.

This water will rush beneath the ice toward the sea and feed into the hydrological catchment of the MacAyeal Ice Stream, one of several major ice streams draining ice from Marie Byrd Land into the Ross Ice Shelf.

By lubricating the bedrock, it will speed the flow of the overlying ice, perhaps increasing the rate of ice-mass loss in West Antarctica. 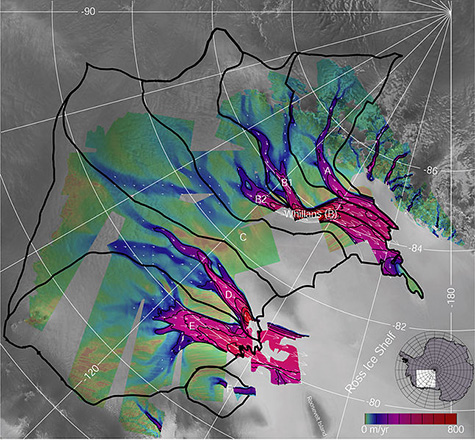 Melt water from the new volcano will drain into the MacAyeal Ice Stream, labeled above as ice stream E, its original designation. This radar image of West Antarctica (see box on the inset at bottom right for location) has been color-coded to indicate the speed at which the ice is moving. Red marks the fast-moving centers of the ice streams and black lines outline each stream’s catchment area. By greasing the skids with water, the new volcano might increase the rate of ice loss from the MacAyeal Ice Stream.

The goal of the original project that led to the discovery was essentially to weigh the ice sheet to help reconstruct Antarctica’s climate history. But to do this accurately, the scientists had to know how the Earth’s mantle would respond to an ice burden, and that depended on whether it was hot and fluid or cool and viscous. The seismic data would allow them to map the mantle’s properties, and so the seismic network was put in place.

In the meantime, automated-event-detection software was put to work to comb the data for anything unusual. When deep earthquake swarms occurred in 2010 and 2011 they were recorded and analyzed.

The discovery of the new and as-yet-unnamed volcano was announced in the November 17 advance online issue of Nature Geoscience.