A submarine eruption at Mount Hobal, underwater flank of Iliwerung volcano, Indonesia, has occurred on August 19/20, 2013. VSI raised the alert level of Iliwerung volcano from 1 (normal) to 2 (watch) following increased seismic and visual activity from Hobal.

Iliwerung volcano forms a peninsula on the south coast of Lembata island, formerly Lomblen. Mount Hobal (Gunung Hobal) is located about 800 m from the coast.

Strangely, no plume or other strong evidence of an eruption have been available so far from satellite data, except tiny spots visible on the latest images of the area which could be floating pumice (VD).

VSI points out that there is an elevated risk of tsunamis associated with potential more eruptive activity, and recommends not to approach the coast within 30 m from the sea. Visitors, fishermen and tourists are not allowed to engage in any activity within a radius of 2 km from the center of activity.​

An increase in tectonic earthquakes around Iliwerung during October 17 – 26 led VSI to raise the Alert Level from 1 to 2 (on a scale of 1-4). From 2 to 11 earthquakes were felt per day with Modified Mercalli intensities of I-II. Visual and instrumental monitoring did not show a significant change in volcanic activity. 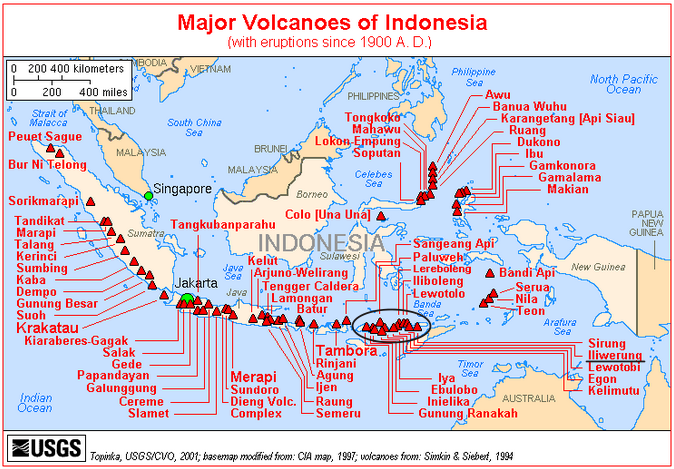 Constructed on the southern rim of the Lerek caldera, Iliwerung forms a prominent south-facing peninsula on Lembata Island. Craters and lava domes have formed along N-S and NW-SE lines on the complex volcano; during historical time vents from the summit to the submarine SE flank have been active.

The Iliwerung summit lava dome was formed during an eruption in 1870. In 1948 Iligripe lava dome grew on the eastern flank at 120 m altitude. Beginning in 1973-74, when three ephemeral islands were formed, submarine eruptions began on the lower SE flank at a vent named Hobal; several other eruptions took place from this vent before the end of the century (GVP).