The White Island volcano off the Bay of Plenty coast, New Zealand, had small eruption this morning sending a plume of steam into the air. GeoNet confirmed the volcano erupted in a brief episode of 10 minutes. The eruption started at 22:32 UTC on August 19, 2013 (10:23 am local time on August 20, 2013) sending mostly steam into the air.

The eruption column was visible from the Bay of Plenty coast with a plume rising to about 4 km above sea level before slowly dispersing. Aviation color code was briefly raised from Green to Red, and is now set on Orange. 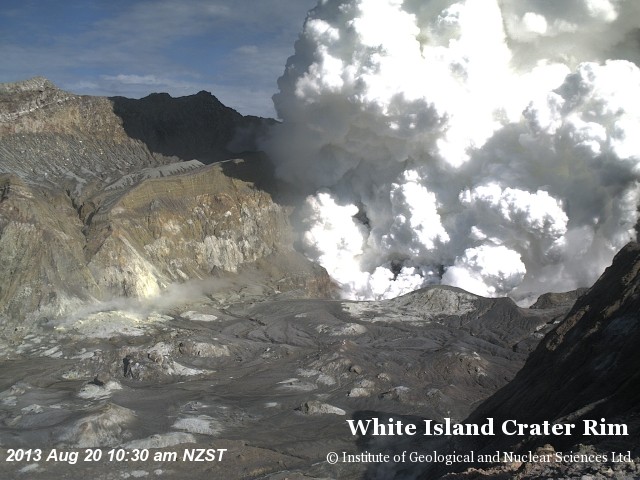 The activity at White Island has now returned to that before this morning's eruption.

The eruption originated in the active crater area that has been experiencing very small mud eruptions in recent weeks. The eruption threw mud and rocks a short distance from the source, and produced large volumes of white steam. Weather radar observations show that a small proportion of volcanic ash was carried with the steam.

White Island has been experiencing low level activity since August 2012 so an eruption like that this morning was not completely unexpected. Volcanologists observed a short period of strong volcanic tremor yesterday morning, but is is not clear if this was related to this morning's eruption.

The hazards posed by an eruption like that this morning are restricted to anyone on White Island or possibly anchored nearby in a boat. Anyone living in the Bay of Plenty is not at risk.

A further update will be issued on Wednesday morning unless there is a substantial change in activity before then.

Video of the White Island eruption taken from the North Rim camera. The video is made from 1 second images from our camera on the island. The eruption starts one minute into the video. Source: GeoNet

Sitting 48 km offshore, White Island (Whakāri) is New Zealand’s most active cone volcano which has been built up by continuous volcanic activity over the past 150,000 years. About 70 percent of the volcano is under the sea, making this massive volcanic structure the largest in New Zealand.

A sulphur mining venture began on the island in 1885; this was stopped abruptly in 1914 when part of the crater wall collapsed and a landslide destroyed the sulphur mine and miners' village; twelve lives were lost. The remains of buildings from that era are now a tourist attraction.

Although privately owned, White Island became a private scenic reserve in 1953, and daily tours allow more than 10,000 people to visit White Island every year. GeoNet monitors volcanic activity and visits the island around 10 times a year.

New Zealand's most active volcano, White Island, was in a state of frequent eruption from 1976 to 2000. An eruptive episode is currently under way. 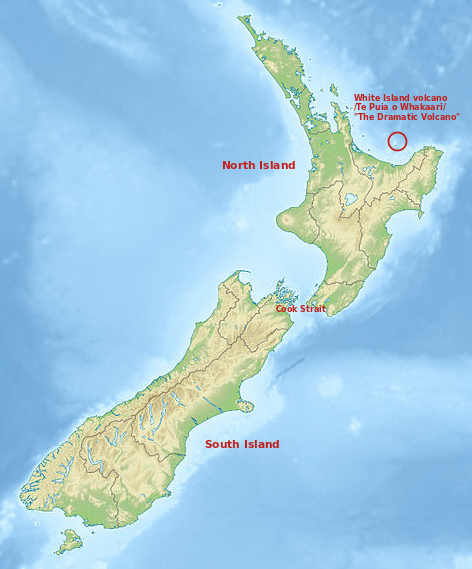 The full Māori name for the island is 'Te Puia o Whakaari', meaning 'The Dramatic Volcano' and “that which can be made visible”. It was named 'White Island' by Captain Cook on October 1, 1769 because it always appeared to be in a cloud of white steam. Although Cook went close to the island he failed to notice that it was a volcano. Its official name is Whakaari/White Island although it is best known as White Island.