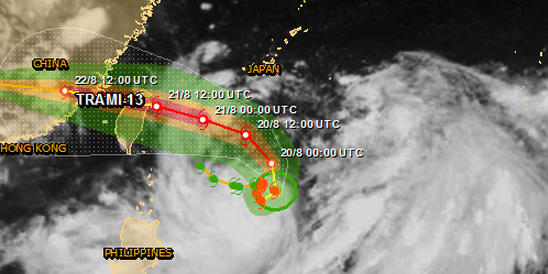 Local officials said at least two people died and several are still missing. Army troops and police rescued 29 tourists who were stranded for hours inside a cave in the northern mountain town of Sagada.

The storm is expected to strengthen into a typhoon with winds of up to 120 km/h (75mph) per hour as it moves north away from the Philippines toward Taiwan and China. 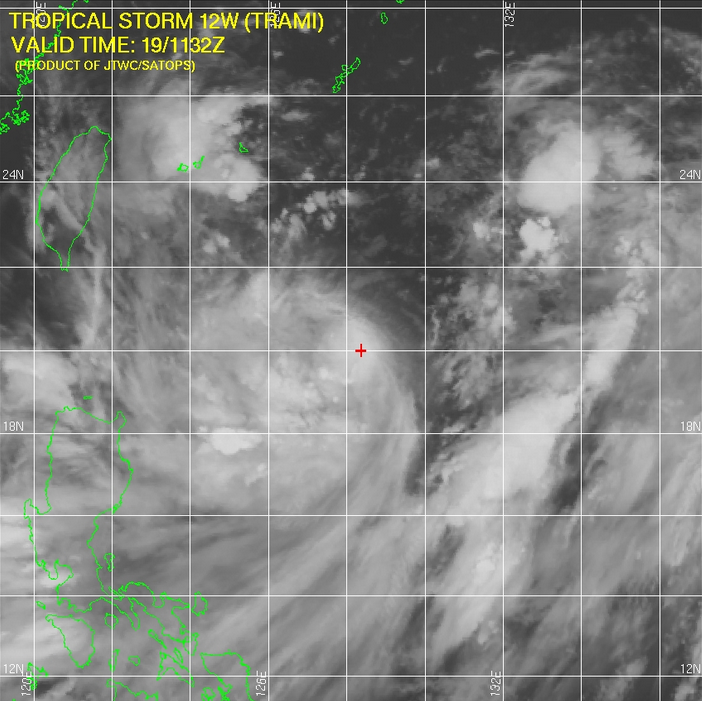 Tropical storm Trami is forecast to cross northern Taiwan as a typhoon at about 18:00 UTC on August 21 and strike China at about 02:00 UTC on August 22. Data supplied by the US Navy and Air Force Joint Typhoon Warning Center suggest that the point of landfall will be near 24.9 N, 119.4 E. Trami is expected to bring 1-minute maximum sustained winds to the region of around 138 km/h (86 mph). Wind gusts in the area may be considerably higher. 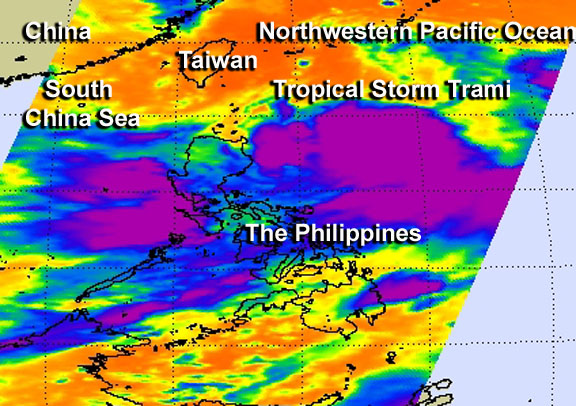 NASA's Aqua satellite passed over Tropical Storm Trami on Aug. 18 it looked at the storm in an infrared light and saw coldest cloud top temperatures and strong thunderstorms (purple) around the center and in a band of thunderstorms south of the center. Image Credit: NASA JPL/Ed Olsen

When NASA's Aqua satellite passed over Tropical Storm Trami on August 18, the AIRS instrument aboard captured an infrared image that showed a large area of thunderstorm activity within the storm. The Aqua satellite passed over Trami at 17:29 UTC on August 18. Aqua's Atmospheric Infrared Sounder instrument looked at the storm in an infrared light. The infrared data showed the coldest cloud top temperatures circled the center of the storm and were in a strong band of thunderstorms wrapping into the center from the southwest. Trami continued to show the same organization on August 19.

Multispectral satellite imagery on August 19 revealed that the low-level center has been consolidating. Whenever a storm consolidates, it typically means that it can spin faster and winds increase. Data from Defense Meteorological Satellite Program polar orbiting satellites showed a near-complete eye-wall, and confirmed the strong band of thunderstorms over Trami's southern semi-circle.