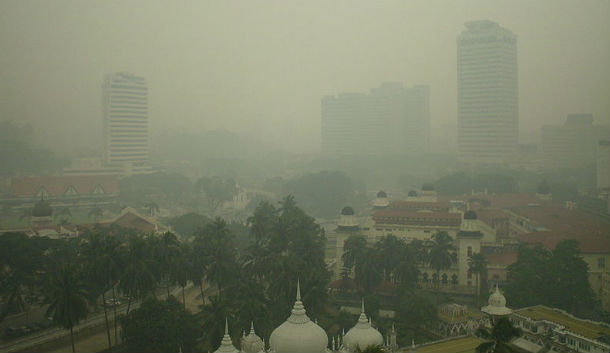 Haze from forest fires on the Indonesian island of Sumatra shrouded Malaysia on June 16, 2013, causing "unhealthy" levels of pollution in six areas. The Air Pollutant Index (API) showed unhealthy levels of between 101 and 129 in several areas. In Malacca, the haze caused the API reading to increase from 68 to 161 over the past three days, the highest recorded in the country. Muar in Johor and Port Dickson in Negeri Sembilan are among the worst hit areas in Malaysia, as they are closest to central Sumatra. The API reached 110 and 117 for Muar and Port Dickson. In the capital Kuala Lumpur the skies were hazy with air pollution readings at 92, just below the unhealthy threshold.

According to Environment Department director general Halimah Hassan, 46 hotspots were detected in Sumatra via satellite. During westerly monsoon season winds blow the smoke towards Malaysia. Haze is an annual problem during the monsoon season from May to September as winds blow the smoke across the Malacca Strait to Malaysia. Haze, mostly caused by fires in Indonesia, builds up during the dry season, affecting tourism and contributing to health problems across the region. On June 14, 2013 Singapore experienced its haziest skies since October 2010, as the three-hour Pollutant Standards Index (PSI) reading hit 88 — the higher end of the moderate range. 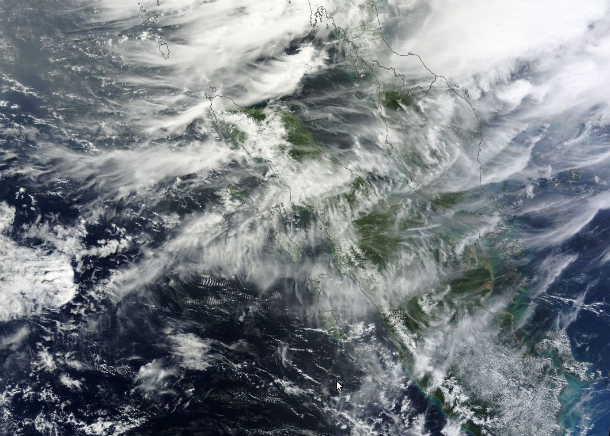 Malaysia’s Environment Department and Indonesian authorities expect the haze situation to worsen with the hot and dry spell in the Riau district of Sumatra set to peak over the next two weeks. The Meteorological Department's Fire Danger Rating System also reported that almost the entire country was at high risk of fires from the hot and dry weather. The Fine Fuel Moisture Code (FFMC) chart on the department's website rated the ignition potential of many parts of the country as “extreme”. The code, which is a numerical rating for moisture content of litter and other cured fine fuels (grass, bushes, dried leaves), is used as an indicator of potential for fires to start and spread in an area. It is affected by temperature, relative humidity, rainfall and wind speed.

The particles that cause the haze phenomenon can originate from many sources, some of which are natural and some anthropogenic. Natural sources include the oceans, forests and ground surface. However the majority of the particulates are from human activities which include open burning, land clearing, vehicular use and combustion of fossil fuels in industrial boilers.

Haze is caused by "hotspots" (zones with high temperature levels as seen via satellite imagery) in Malaysia and Indonesia. Lingering smoke from forest fires on the Indonesian island of Sumatra are identified as the primary cause. Farmers regularly burn scrub and forest to clear land during the dry season for agricultural purposes. The haze hit its worst level in 1997-1998, costing the Southeast Asian region an estimated $9 billion by disrupting air travel and other business activities.