The dust plumes originated from the Gobi Desert arose along the China-Mongolia border on March 8, 2013. Arising along the border between China and southwestern Mongolia, the dust extended as far south as the Sichuan Basin and continued to blow for several days. The Gobi Desert is one of the world’s leading dust producers, and March typically brings the greatest number of dust storms, according to the University Corporation for Atmospheric Research. 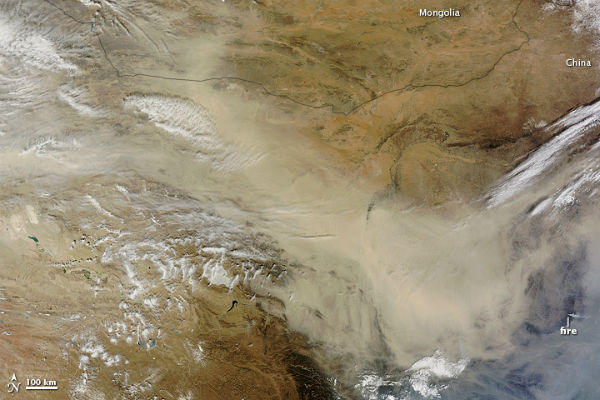 TheModerate Resolution Imaging Spectroradiometer (MODIS) on NASA’s Terra satellite captured this image on March 9. The dust had continued traveling toward the southeast, and the camel-colored plume extended several hundred kilometers into eastern China. In the southeast (lower right corner of this image), the dust approached China’s coastal plain. Gray haze hung over that region and although the dust likely worsened air quality there, the gray color of the haze suggested other sources, such as urban and industrial smog, and smoke from fires. At least one fire sent a discernible smoke plume eastward, ahead of the dust. (NASA image courtesy Jeff Schmaltz, LANCE MODIS Rapid Response. Caption by Michon Scott)

The mid-March dust was the second dust event to affect Beijing in 2013, following the first on February 28. Winds had blown haze out of the Beijing area but brought in dust to replace it on March 10, 2013. Fierce wind damaged power lines in a district in the Liaoning provincial capital of Shenyang,causing a 4-hour power failure to nearly 2,000 households.

Dust that arose along the China-Mongolia border in early March 2013 had blown into central China by March 13, 2013. The plumes stretched as far eastward as Henan Province and as far south as the Sichuan Basin. 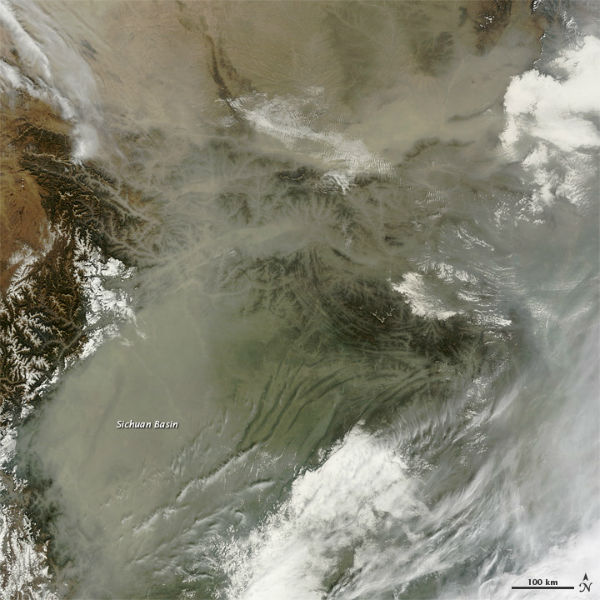 The Moderate Resolution Imaging Spectroradiometer (MODIS) on NASA’s Terra satellite captured this natural-color image on March 13, 2013. Dust obscured the satellite’s view of the land in many locations, although in some areas it was confined to valleys while mountain peaks poked above the plumes. The dust appeared thickest in the northeast, next to a thick bank of clouds. (NASA image courtesy Jeff Schmaltz, LANCE MODIS Rapid Response. Caption by Michon Scott.)

The major air pollutant in the capital city changed from PM2.5 to PM10. Both PM2.5 and PM10 particles can pose health hazards, although PM2.5 particles are generally considered more dangerous because their smaller size allows them to be inhaled more deeply into the lungs. Within a few days, PM2.5 levels had risen again. U.S. Embassy in Beijing reported PM2.5 readings of unhealthy and very unhealthy as of March 14, 2013.

In January 2013, the Beijing city government reported levels of PM2.5 as high as 700 micrograms per cubic meter – 28 times the World Health Organization’s recommended safe level of 25 and the highest since the government began reporting PM2.5 numbers last year. 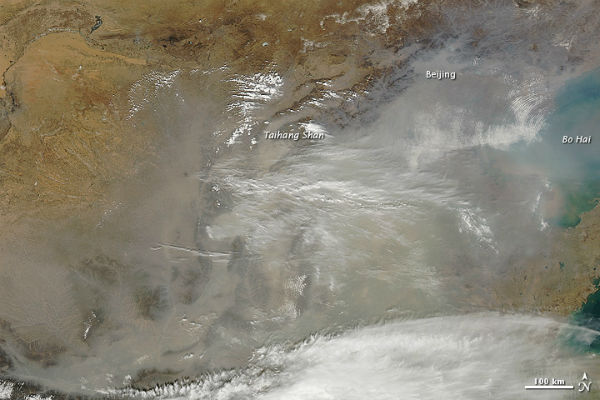 When the Moderate Resolution Imaging Spectroradiometer (MODIS) on NASA’s Aqua satellite captured this natural-color image on March 14, aerosols were thick over Beijing and the Bo Hai Sea. Although dust hung heavy over the plain, some mountain peaks (such as those of the Taihang Shan) rose above the dust and haze. (NASA image courtesy Jeff Schmaltz, LANCE MODIS Rapid Response. Caption by Michon Scott)

High winds in eastern China downed power lines, blew the roof off a factory, and made it harder to contain the forest fire at Mount Taishan, a World Heritage site. Mount Taishan is the most famous sacred mountain of China, with exceptional historic, cultural, aesthetic and scientific value.

South Korean and Japan officials reported polluted particles from China are spreading to their countries. Last week, residents of Japan’s Kumamoto prefecture were told to stay indoors or wear masks as protection against airborne particles from China.