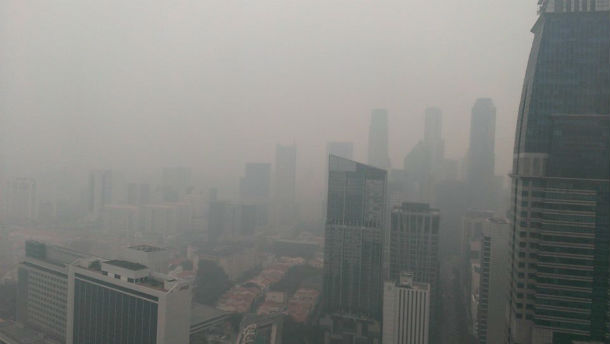 The thick smog from large illegal slash-and-burn land clearance practices​ in Sumatra has been carried by prevailing winds blowing from the southwest, and has been affecting Singapore, Malaysia and surrounding areas since June 13, 2013, pushing pollution to record levels.

According to the Singapore National Environment Agency, Singapore’s primary measure of pollution, the Pollutant Standards Index (PSI) rose to 371 on June 20, 2013 and the PSI reached 401 on June 21, 2013. That is the highest level ever recorded. The previous record occurred in 1997, however, PSI values only made it to 226 then.

The National Environment Agency warned the elderly, children, pregnant women and those with heart and respiratory problems to remain indoors and wear masks if they must go outdoors.​ One million masks were distributed to the People's Association (PA) and various PA Constituency Offices by some 200 Singapore Armed Forces (SAF) personnel. Readings this high are well above what are considered healthy, soaring into the hazardous category for the entire population.​ Health experts consider any level above 300 to be “hazardous” to human health. Levels above 200 are considered “very unhealthy.” 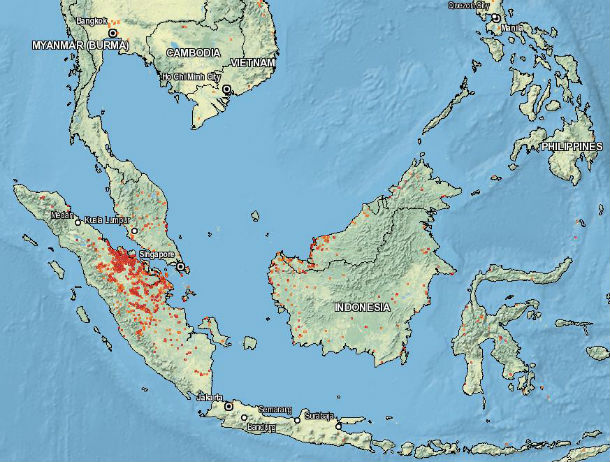 Though local laws prohibit it, farmers in Sumatra often burn forests and agricultural fires during the dry season to prepare soil for new crops. 85 hotspots were detected over central Sumatra on June 20, 2013. Indonesian and Singaporean officials have been holding emergency talks on how to extinguish the fires on farms and plantations on Sumatra island, which are also affecting Malaysia. 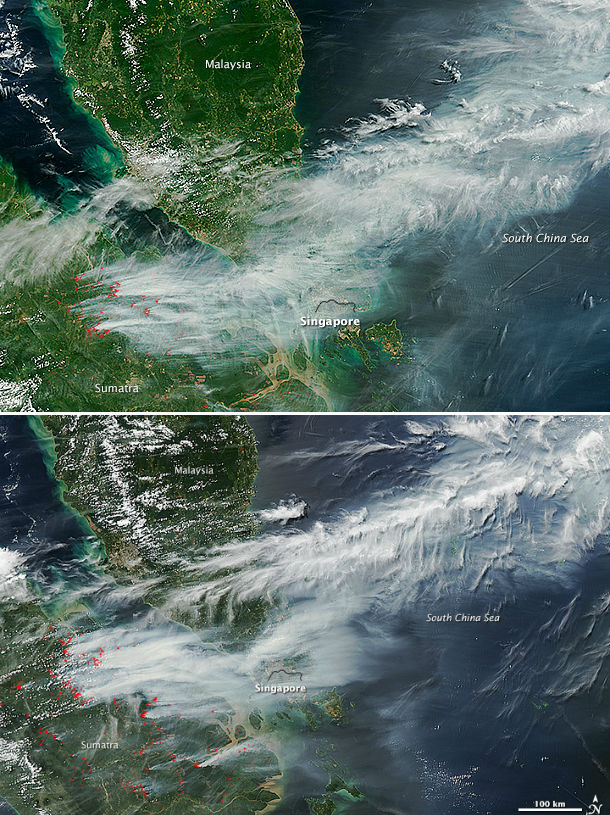 Images captured by the Moderate Resolution Imaging Spectroradiometer (MODIS), an instrument that observes the entire surface of Earth’s every 1 to 2 days. The top image shows smoke blowing east at 3:30 Universal Time; the lower image shows the same area on the same afternoon at 6:30 UTC. (Credit: LANCE/MODIS)

Southwest Monsoon conditions brings drier weather across much of Singapore, Malaysia and Indonesia. June is typically a dry time of the year in this region compared to India, Nepal, Thailand, Cambodia and Vietnam, where it brings heavy rains. Occasional extended periods of drier weather can be expected in the upcoming months. The dangerously hazy conditions are expected to persist for at least the next few days.

During the season, increased hotspot activities may be expected in Sumatra and Borneo. Transboundary smoke haze could affect the region during periods of persistent dry weather conditions.