Situated in the Aleutian Arc about 625 miles (1,000 kilometers) southwest of Anchorage, Alaska, Pavlof volcano began erupting on May 13, 2013 and Alaska Volcano Observatory (AVO) changed its volcanic alert level from Advisory to Watch and aviation color dode from Yellow to Orange. The volcano spewed lava into the air with an ash cloud reaching 6 km (20,000 feet), extended southeastward over the North Pacific Ocean. The volcanic eruption at Pavlof volcano continues.

Astronauts aboard the International Space Station (ISS) photographed these striking views of Pavlof volcano on May 18, 2013. 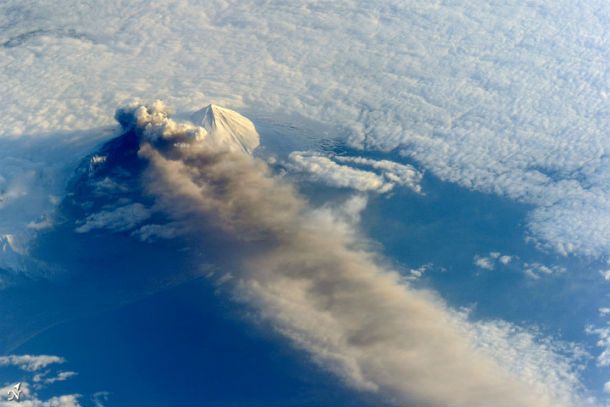 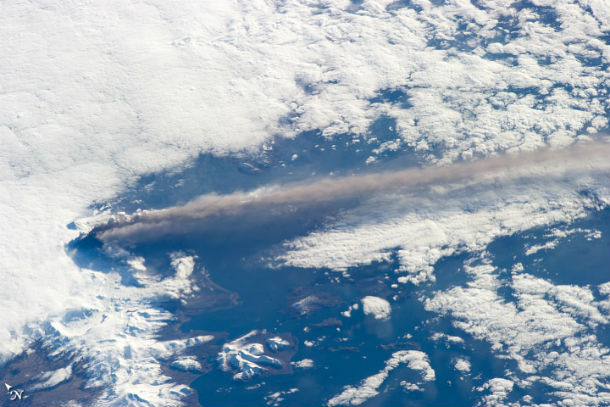 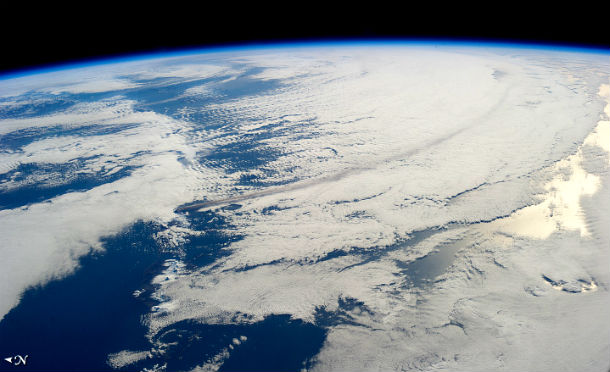 The most active volcano of the Aleutian arc, Pavlof is a 2519-m-high Holocene stratovolcano that was constructed along a line of vents extending NE from the Emmons Lake caldera. Pavlof and its twin volcano to the NE, 2142-m-high Pavlof Sister, form a dramatic pair of symmetrical, glacier-covered stratovolcanoes that tower above Pavlof and Volcano bays. A third cone, Little Pavlof, is a smaller volcano on the SW flank of Pavlof volcano, near the rim of Emmons Lake caldera. Unlike Pavlof Sister, Pavlof has been frequently active in historical time, typically producing strombolian to vulcanian explosive eruptions from the summit vents and occasional lava flows. The active vents lie near the summit on the north and east sides. The largest historical eruption of Pavlof took place in 1911, at the end of a 5-year-long eruptive episode. During this eruption a fissure opened on the northern flank of the volcano, ejecting large blocks and issuing lava flows. (Global Volcanism Program)

Astronaut photographs ISS036-E-2105, ISS036-E-2464, and ISS036-E-2780 were acquired on May 18, 2013, with a Nikon D3S digital camera using 800, 400, and 50 millimeter lenses, respectively. The photographs are provided by the ISS Crew Earth Observations experiment and Image Science & Analysis Laboratory, Johnson Space Center. The image was taken by the Expedition 36 crew. They have been cropped and enhanced to improve contrast, and lens artifacts have been removed. The International Space Station Program supports the laboratory as part of the ISS National Lab to help astronauts take pictures of Earth that will be of the greatest value to scientists and the public, and to make those images freely available on the Internet. Additional images taken by astronauts and cosmonauts can be viewed at the NASA/JSCGateway to Astronaut Photography of Earth. Caption by Robert Simmon, NASA Earth Observatory, and G. M. Gentry, DB Consulting Group at NASA-JSC.