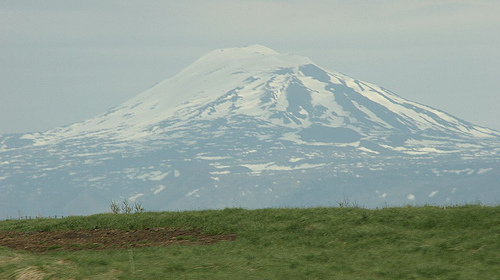 One of the Iceland’s most active and hazardous volcano, Hekla volcano, is having unusual seismicity according to the report issued by Icelandic Meteorological Office. Given possibility of a new eruption, volcanic alert level has been raised to yellow and monitoring has been intensified.

Since 1970, this volcano has erupted every decade and had last eruption in March 2000. Icelandic Civil Defense declared a Civil protection state of uncertainty on Tuesday, March 29, 2013; which is a standard procedure in Iceland to ensure a smooth flow of information among scientists, government officials and emergency teams. It is lowest of three levels in case of natural hazards. The Icelandic Met Office statement said,

“The change from green to yellow is a precautionary step. To date, there are no observable signs that an eruption of Hekla is imminent.”

One of Iceland’s most prominent and active volcanoes, Hekla lies near the southern end of the eastern rift zone. Hekla occupies a rift-transform junction, and has produced basaltic andesites, in contrast to the tholeiitic basalts typical of Icelandic rift zone volcanoes. Vatnafjöll, a 40-km-long, 9-km-wide group of basaltic fissures and crater rows immediately SE of Hekla forms a part of the Hekla-Vatnafjöll volcanic system. A 5.5-km-long fissure, Heklugjá, cuts across the 1491-m-high Hekla volcano and is often active along its full length during major eruptions.

Repeated eruptions along this rift, which is oblique to most rifting structures in the eastern volcanic zone, are responsible for Hekla’s elongated ENE-WSW profile. Frequent large silicic explosive eruptions during historical time have deposited tephra throughout Iceland, providing valuable time markers used to date eruptions from other Icelandic volcanoes. Hekla tephras are generally rich in fluorine and are consequently very hazardous to grazing animals. Extensive lava flows from Hekla’s historical eruptions, which date back to 1104 AD, cover much of the volcano’s flanks. (GVP)