The intensity of ongoing earthquake swarm at El Hierro island increased on March 28, 2013. 119 earthquakes have been recorded so far at depths of 16-18 km. A few weaker quakes have also been recorded at lower depth of 7-10 km, possibly related to release of stress caused by the strong deformation, rather than intruding magma as was suspected before. 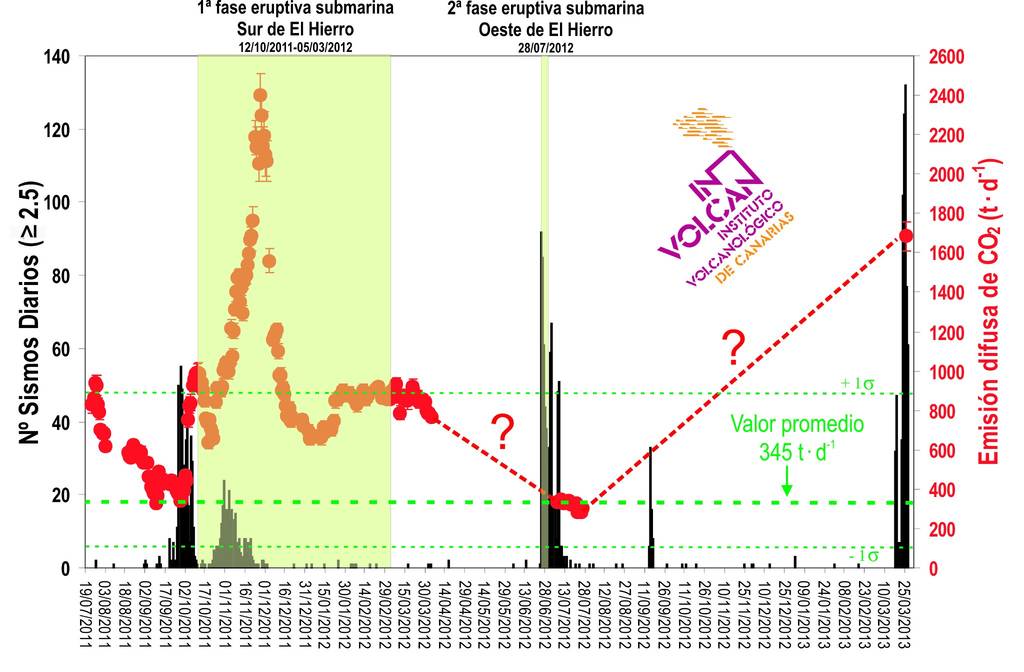 Graph of CO2 emissions comparing current levels (1684 ± 72 tons of CO2 per day) with measurements during the previous eruptions and crises. Source: INVOLCAN

Also, many rockfalls have been noted from the steep cliffs in the western part of the island. Particularly along the road Frontera-Sabinosa during the more intense phases in the past days, with earthquakes as strong as 4.6.

The Instituto Oceanografico has released a 3D animation of the new volcanic cone formed in 2011-12, using the new data obtained by the latest bathymetry mission of the Oceanographic Vessel Ramon Margalef:

El Hierro, nicknamed Isla del Meridiano (the “Meridian Island”), is the smallest and farthest south and west of the Canary Islands (an Autonomous Community of Spain), in the Atlantic Ocean off the coast of Africa, with a population of 10,162 (2003). The massive Hierro shield volcano is truncated by a large NW-facing escarpment formed as a result of gravitational collapse of El Golfo volcano about 130,000 years ago. The steep-sided 1500-m-high scarp towers above a low lava platform bordering 12-km-wide El Golfo Bay, and three other large submarine landslide deposits occur to the SW and SE. Three prominent rifts oriented NW, NE, and south at 120 degree angles form prominent topographic ridges.

The subaerial portion of the volcano consists of flat-lying Quaternary basaltic and trachybasaltic lava flows and tuffs capped by numerous young cinder cones and lava flows. Holocene cones and flows are found both on the outer flanks and in the El Golfo depression. Hierro contains the greatest concentration of young vents in the Canary Islands. Uncertainty surrounds the report of an historical eruption in 1793. (GVP)